On Shake Before Using, the "Max Payne Bridge" room now has water in it, possibly a coolant tank. This also has the amusing feature of a waterfall sound being placed by the pit's escape teleporter and no water in its polygon. You teleport... and end up underwater as all the water flowing into the teleporter flooded the secret room with the trooper in it. That's a nice touch.

At first, I thought it was stupid and weird that FIREx5 is now a vacuum level but after reading the development logs and to-do list on the Pfhorums, it all makes sense now: the lava and flames from such are producing so much smoke, it's clouded the whole map. Since you can't crouch, you are forced to breath in the smoke and choke. That's very clever; that area is quite cramped after all and the air scrubbers may have broken down. The alpha I was playing simply doesn't have the fog effect for the smoke yet, but later ones do. (I saw a screenshot of it, including with the new lava texture)

I noticed a minor bug on Habe Quiddam other than the extra converter where Bobs would accidentally run into the hole above the lava after lowering the lift. They've been stuck on the lift when it's lowered in Classic and M1A1 but they haven't deliberately run over the edge before. At least I think they did, as my hint was they made their fire death scream in the distance.

Simulacrums now use all of their lines from all three games, not just their M1 line. Just like the other Bobs. :)

I wondered if the alien energy converter would be now shown to provide a way to show ammo clips and crosshairs on the staff and havok rifle, but it still does nothing so far. I can only assume it's meant to allow you to use the Pfhor terminal types, as well as provide the pfhoric and s'pht language translators we use in the sequels. I know terminals for the pfhor levels are planned according to the project thread. I'm only guessing.

Neither High or Low is also now in vacuum and actually still doesn't make sense as it's an interior area and there isn't any obvious reason so far. My guess as to why it's in vacuum is that it might be located in one of the very areas you and Leela depressurise earlier in the game.

Pfhor levels: Pfhor your eyes only has some extra geometry outside some of the windows, like with on the Marathon, including an upper hallway I have no idea how to reach. I also noticed a secret door in the pattern buffer room that doesn't open which can only be the coolant vent to the new section in Sorry Don't Make It So that is blown open in Marathon 2, flooding the room.

I found what looks like a pfhor terminal at the top of the second winding staircase, but it isn't working yet if it is one. The empty hunter armour that you see charging can now be picked up and used to give you level one shields (i.e. the yellow 2x health).

The radioactive green slime now uses the pink coolant sound from the sequels, just like how the lava uses its sounds. The swimmable waterfall traps from early M1A1 builds/ios version are back. Interestingly, the goo is transparent and has the M1A1 shimmer effect in this alpha while the lava doesn't. (no longer the case in later builds, as lava can now support transparency) In M1A1, it's the other way around.

Two Times Two Equals now has little hatches to space disguised with slime to serve as pfhor defense drone dispersal vents. The ios/early M1A1 passage hides one such vent and the rest of the passage is blocked off. Low Flying Defense Drones does a similar thing regarding the out of bounds weapons room, but without the drone vents.

The pfhor cyborg seems to be immune to rockets now so you have to shoot him. After some damage. he starts moving around a bit from side to side to evade your shots until you kill him. Impressive. It looks a little more like a boss fight now. He still doesn't actually attack yet as far I can see.

Enforcers now come in yellow and red and both attack other Pfhor as Leela advertises.

The pfhor eggs (The artificial pupae on Ain't got time Pfhor this, not their actual eggs which are never seen) can now be destroyed. They smash like glass and vanish though. I would have thought they'd smash, but the half-metamorphed pfhor inside it would crawl out and collapse.

Try Again not only brings back the deep lava pools from M1A1, but has stepped "underwater" hotplate lava in the fusion vent, like tiers on an early pyramid. It looks cool. You also get a Spec Ops hunter (black) with homing shots near the end, similar to the Commander hunter (blue) introduced in G4 Sunbathing.

Ingue Ferroque has the overshield chip (invincibility) from M1A1 by Durandal's terminal and the pattern buffer is now the early M1A1/ios exclusive second credits terminal room, which also has a pattern buffer. (the terminal with the M1A1 credits as opposed to the Marathon credits.

The Rocket Launcher no longer looks like the metal potato it was in M1 Classic and M1A1. It's shape and official name (SPNKR X17 SSM) printed on the side make me think of the SPNKR from Halo, which looked similar to the M2 one and shared a nickname. (though I know of Halo's one first)

Let's not forget the rocking new Marathon 1 main theme (a fan remix of Splash) which makes it even more awesome.

The later game levels which are more unchanged than the early game I don't mind as i know it's just an alpha. I've read up on some of the plans for changes in the to-do list and they sound cool.

The Tycho plank idea sounds unique too. It means we'd get to see his side of the story. Would this also have implications regarding the ending and aftermath depending which AI you chose to follow? It makes me think of the original Magnadoodle HUD below given a modern facelift. 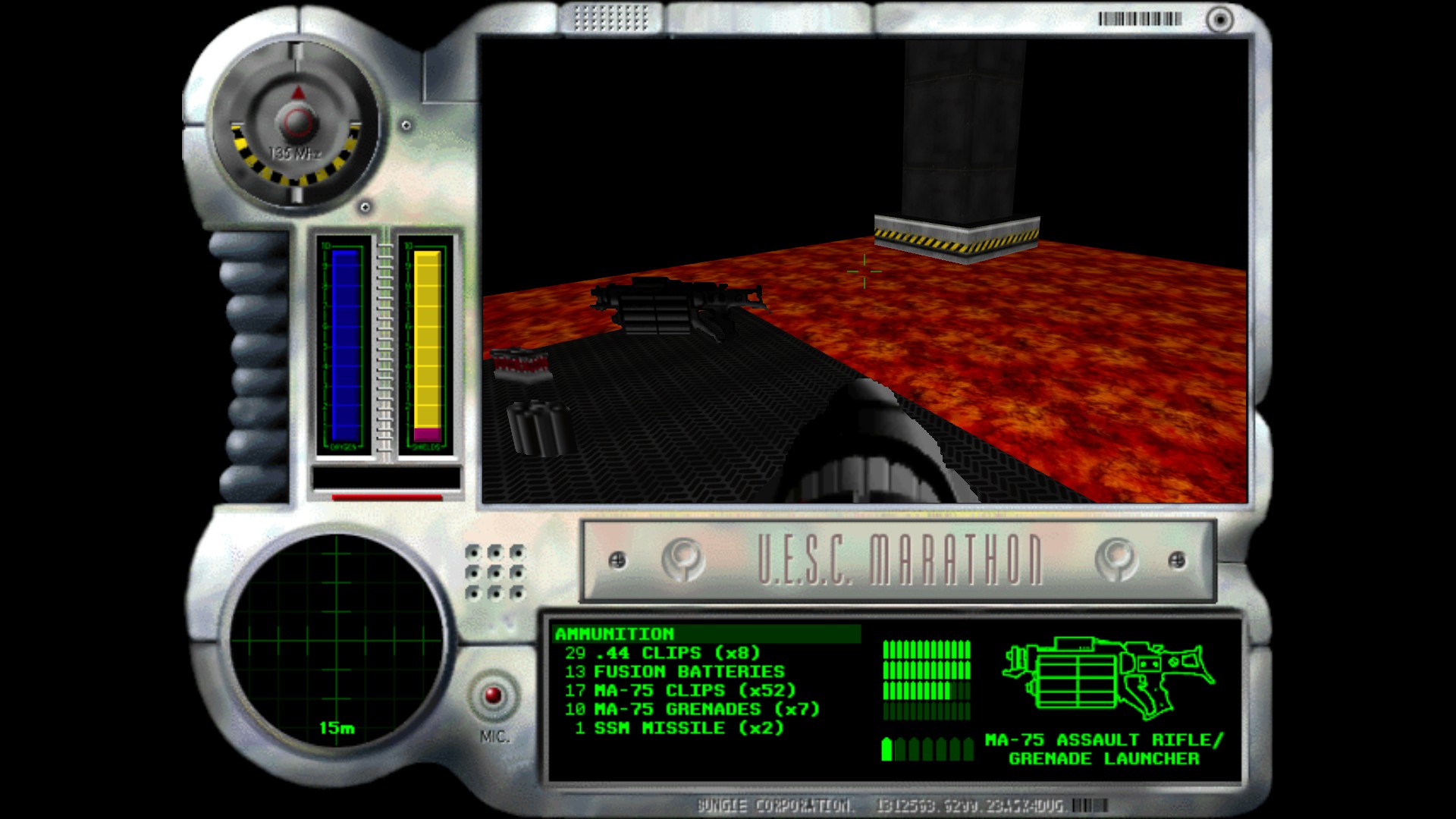 I wonder though, what is the new bar above the motion tracker? Is it just decorative?