I'm probably beating a dead horse covering this after so many years but here is a possible translation of Eat the Path's poem in the opening terminal.

It may have connections to both this game's story and other video games in general.

Find the right way down through the maze to the food. Then find the exit.

Explore the level and find ammo, items and/or complete your objective. More so the latter in Marathon until later games did something similar.

Self explanatory. Most FPS's at the time ended with the exit button being a switch in a (most of the time) clearly marked end room. Marathon's equivalent being the end terminals.

PID's levels didn't really "end" as they were changed for another when climbing ladders. ROTT: Dark War had archways with staircases at the end for its exits.

If the food tastes awful, don't eat it; go back and try another way.

Possibly running into a dead end? Other ideas for this line could be looking for the secret exit but not finding it, the secret level might be too hard or the path to the secret exit too cryptic or difficult.

Any other ideas for it are welcome.

These lines also make reference to Marcus/Vincent etc.'s time travelling through ever changing mazes of more or less random paths (in reference to time itself, not the level design) and all of the current timelines being doomed.

They want the same thing that you do really: they want a path, just like you.

More tricky here. They want a Destiny? A purpose or just merely power and the means to survival?

Going by the maze analogy for 4D earlier, it's like how the Daedalus labyrinth on Crete had switchable paths and traps to test it's subjects, many of which if not all of them have been destroyed when most of the maze was lost, although Labyrinth cave which was an ancient building stone mine might be a contender as well for one of the maze's sites.

(or it could have just been the basis for a Greek bedtime story to stop the kids going into the mines, getting lost and starving)

You are in a maze in a maze, but which one counts? Your maze, their maze my maze.

Which dimension and timeline is your home? The one you live in currently, the many others you've been to and are going to or only your own mind assuming the terminal message is from Marcus' subconscious and by extension the player's?

Or are all the mazes the same, defined by the limits of their paths?

Are all dimensions the same is this one with no drastic changes, defined only by their personal physical and chemical laws, and anything removed from our own ones.

It could also mean that all games exist in their own world within our own with iron, gold and silicon devices all wrapped up in plastic and other metals being our means of seeing them.

Which game worlds are more likely to parallel events in our own dimension? Your own favourite other games? Doom? Marathon and PID themselves?

If Xen is one of the border worlds to our dimension or at least Half Life's anyway, cyberspace and it's dimension's border world could have been philosophised more or less around this time... 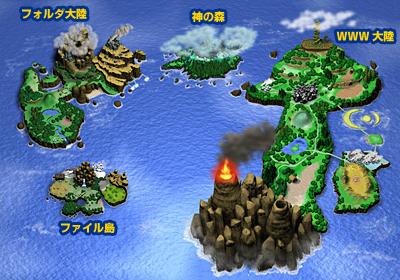 Are they all connected in some way but only differ thanks to their own rules in the writing? Does the programming count e.g. Marathon and Doom Sprint of Faith(tm) and physics?

If so, then what are bugs and glitches in those dimensions when they are out of the computer?

Existence is simple; eat the food, push the button, hit the treadmill

For in universe and our reality, self explanatory: feed and hydrate, solve problems and keep active in some way.

Otherwise; it means complete objectives, collect more ammo and items and... well this one has a few answers.

My Steam friend who did a very good Marathon let's play which was referenced in this map's ToD page says that "hit the treadmill" means "fight the enemies".

While possible, a more plausible explanation is simply running and jumping in game because it's subtly referencing how 2.5D engines like Vulcan and Aleph One work:

In such style game engines, the player may or may not have a sprite representing them when playing. Marathon, Doom, Wolf 3D etc. all do but for all we know, PID and other games might not, or at least have a placeholder for our character.

While the sprite is animated to look like it's moving, it actually is not moving at all; the world moves around the players sprite while they mime the actions with their frames.

It's like running on a treadmill, or using a cross-trainer with VR courses in it like my dad's bike turbo trainer in the garage.

But sometimes it gets much harder; sometimes the food makes you sick, or you hear nearby feet racing you. urging you on. Sometimes the button lands you right in the beginning of the maze again and the food won't satisfy.

I can't think of an in universe translation here. I will say that the other meanings are as follows:

1. There may be an ambush or trap after picking up an item or completing your objective.

2. There may be a time limit; 10 minutes per level, 1 hour or 75 minutes per game or (god forbid) 5 days plus a 7 minute penalty for healing. (except drinking silver)

That or you have some irritating NPC escort mission where they are all walking Cornish pasties at lunchtime.(or become them anyway)

My Steam friend explains and shows such events that we've all seen before.

3. You may be sent back to the start of the level for any reason or go to the same level again through another entrance like in PID or Strife.

The Electric Sheep device depicted in the titular levels served as a gateway to other levels in the game and allowed you to go back for whatever reason in the later versions.

Other than that, Terry the Termite and his Looker bugs WAD's for Doom spring to mind regarding the end of that stanza.

There is only one path and that is the path that you take. But you can take more than one path.

This game and series has only one storyline and you must follow it. But there are a few branching levels in places such as the aforementioned Electric Sheep backtracking, the co-op carnage levels and the Vidmaster Challenge.

And since this game is the one that introduced Forge so players could have better means (at least on Macs) to make their own levels, this can mean that there are more paths to take.

Alternatively: You only have 1 life and what you do is fixed and cannot be altered because backwards time travel is impossible at this time period. But you can shape your own world and choose how to live, even if it means taking the wrong path until you hit a dead end in more meanings than one.

Break out of this prison of a world and move on to the next. Reshape it to suit your own needs such as saving it from destruction by the W'rkncacnter or another Lovecratian horror.

Find the portal to the next dimension, go through it, try and fix this one and complete your goal by any means necessary, eat the path being cutting from one dimension to another one you've already been to and trying using something, anything from another timeline that the laws of time were not expecting and use that to "make the maze from its path".

It also references the Gherrit White terminal in Marathon 1, where Gherrit tries to escape from prison by swimming through the bars of his cell which are chomping like a set of teeth.

He gets pushed back in by the bars and has to reorient himself to find them again before making it through.

That terminal and its connection could also be seen as when escaping your dimension, the cell bars i.e the barrier between dimensions might be a wormhole. Trying to get through but failing could result in being crushed as like in a black hole, the actual opening in the spacetime fabric is very small as is the tunnel within that hole.

We can also see Gherrit's exploits as Durandal breaking through the firewalls of his Marathon network domain and spreading through out the ship and beyond when he hijacks the Sfiera.

I hope I haven't wasted anyone time in pondering this through the forum. Being over-analytical is a good thing. It can lead to... important discoveries.