Forward: Plans have changed so I'll be covering the final three sections counting the epilogue. 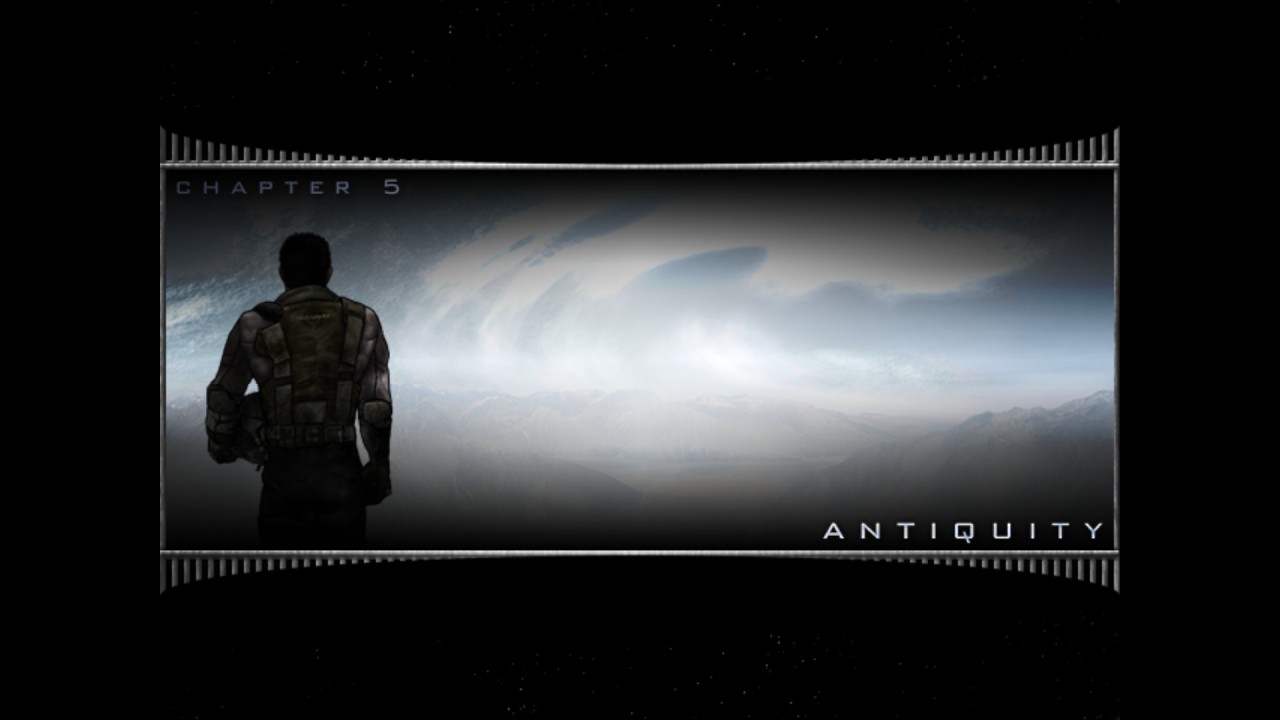 Last time on Tour of Duty, I travelled into a Jjaro Shield World that doubles as a Halo ring, met 343 Guilty Spark as a more conventional AI than a glowing metal ball and instead of killing Hathor, saw that she had reformed on the brink of death, now coming up with a solution that doesn’t involve firing the Dyson Sphere: nuke the W’rkncacnter the Jjaro first found before it can defend itself, using a Trih Xeem. 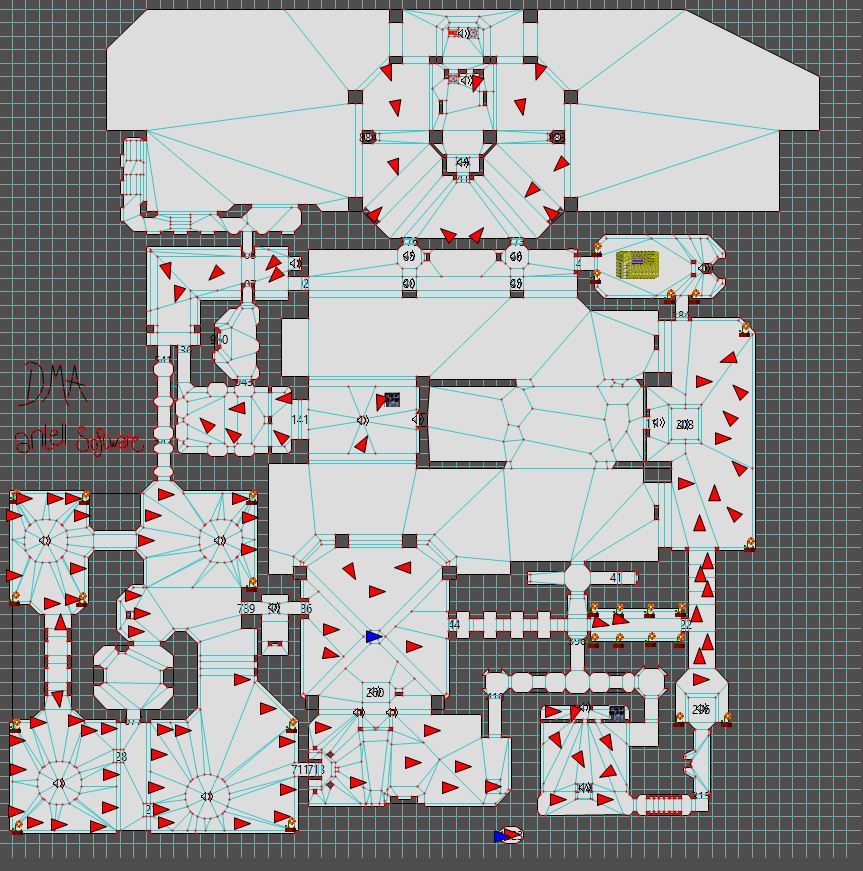 I start opposite a 1X shield charger next to a large room filled with skitters and nightmares. Down the stairs and to the right I find a large square room with a fusion turret in the middle. The southeast has a chip I likely need so I get it and return to the pattern buffer by the square turret room. 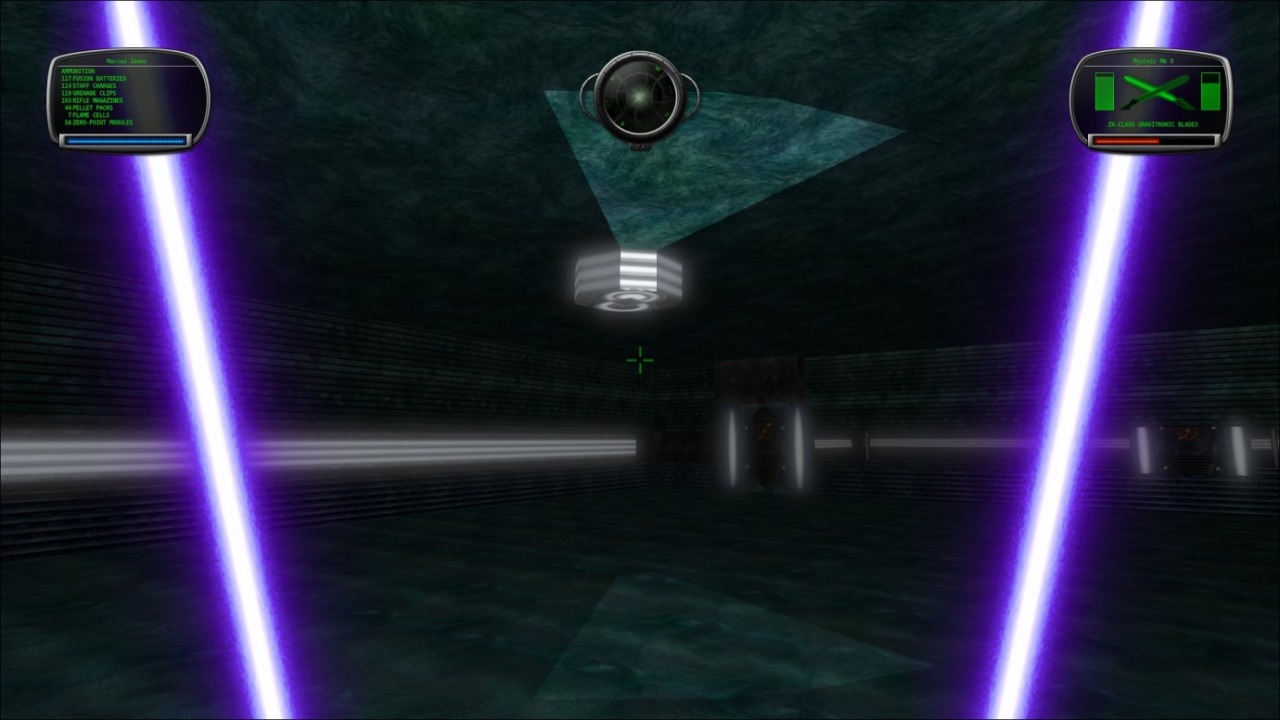 That’s so cool! An actual alarm light made using chase lights! Aleph One needs more of those in more mods, especially in colored lighting. Duke Nukem 3D could do the latter the same year as Marathon Infinity (such as using colored chaselights for nightclub lighting), Marathon should do the same, albeit for anything the mapmaker wishes. A button in here opens the middle room with a terminal and pattern buffer. 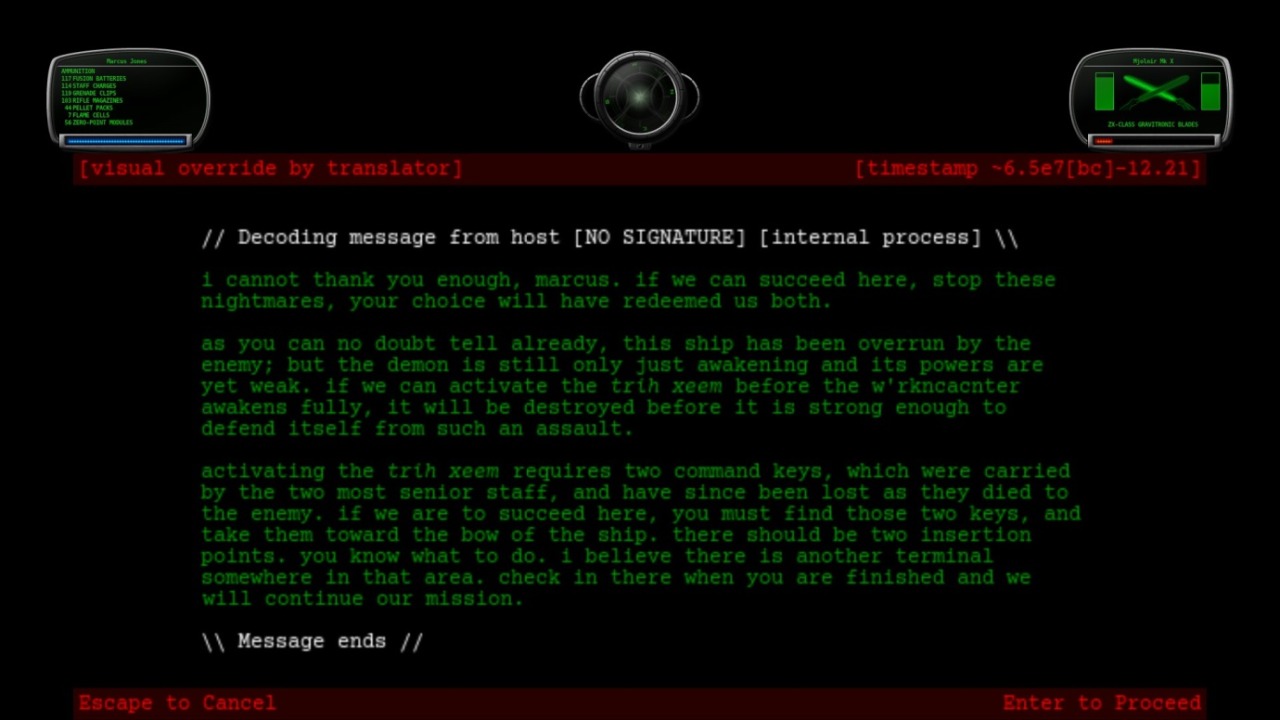 I actually picked up both chips without realising so this works out perfect. Now I need to get to the bridge. I hit some switches north of the lower hall to the turret room, the first opens the second and the second activates an elevator to another shield charger between the alarm room and turret room.

North of the alarm room is a small side area with another charger and save terminal. It connects to an area with PID monsters and a third chip. In the north area I find the bridge and place the chips. 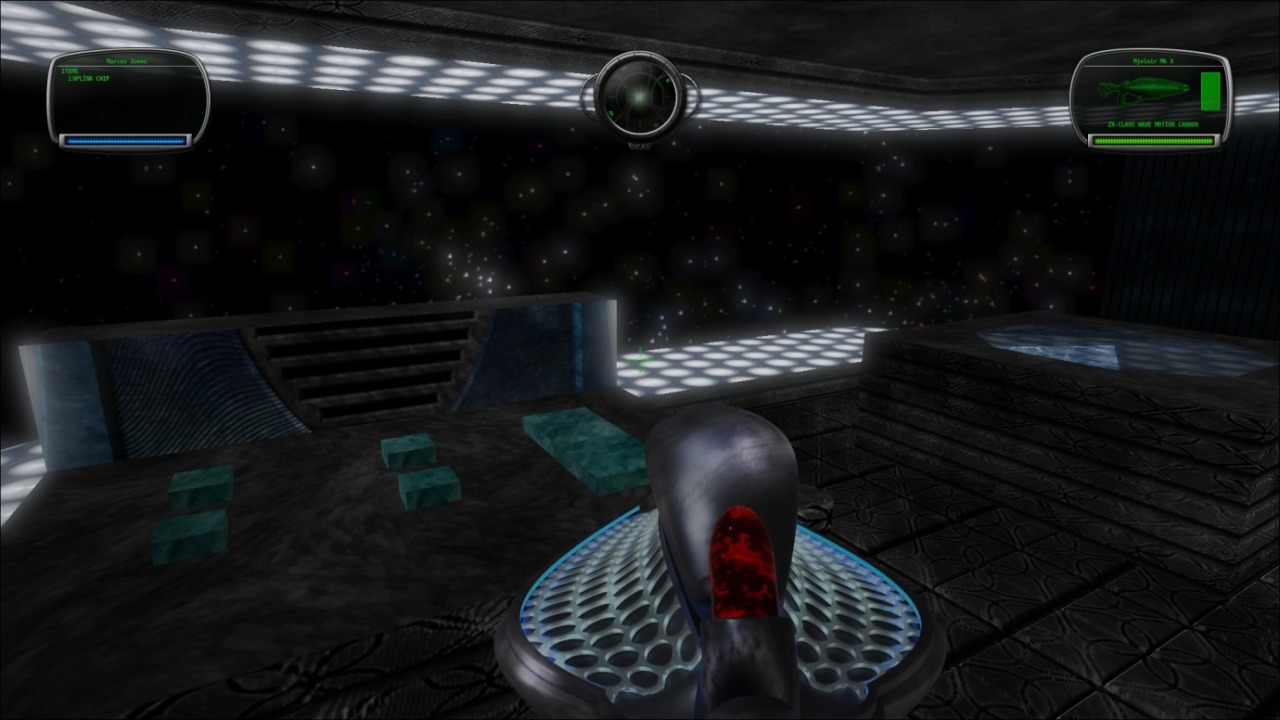 It looks like a working radar next to other controls. It’s nice and cosy in here. 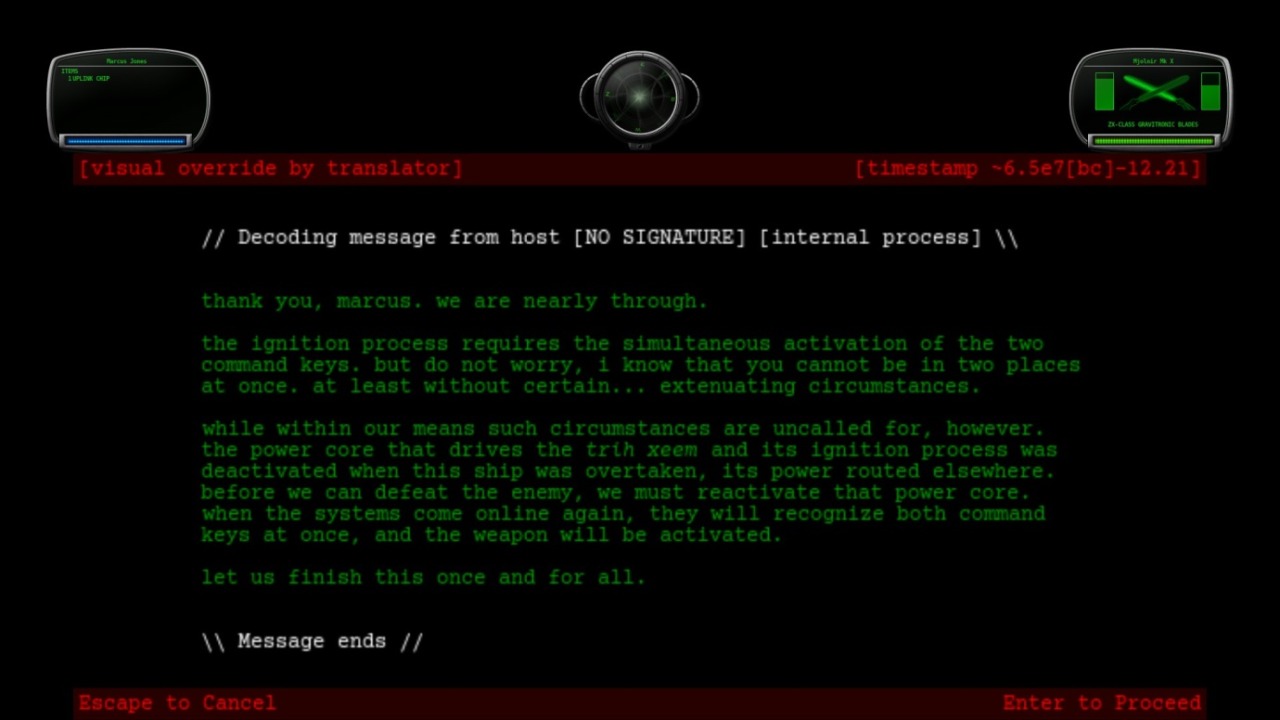 Act 2: I’ve Got a Bad Feeling About This

Boy, you always got a bad feeling about something. That’s a Halo reference, not an Alien one as I played Halo first. 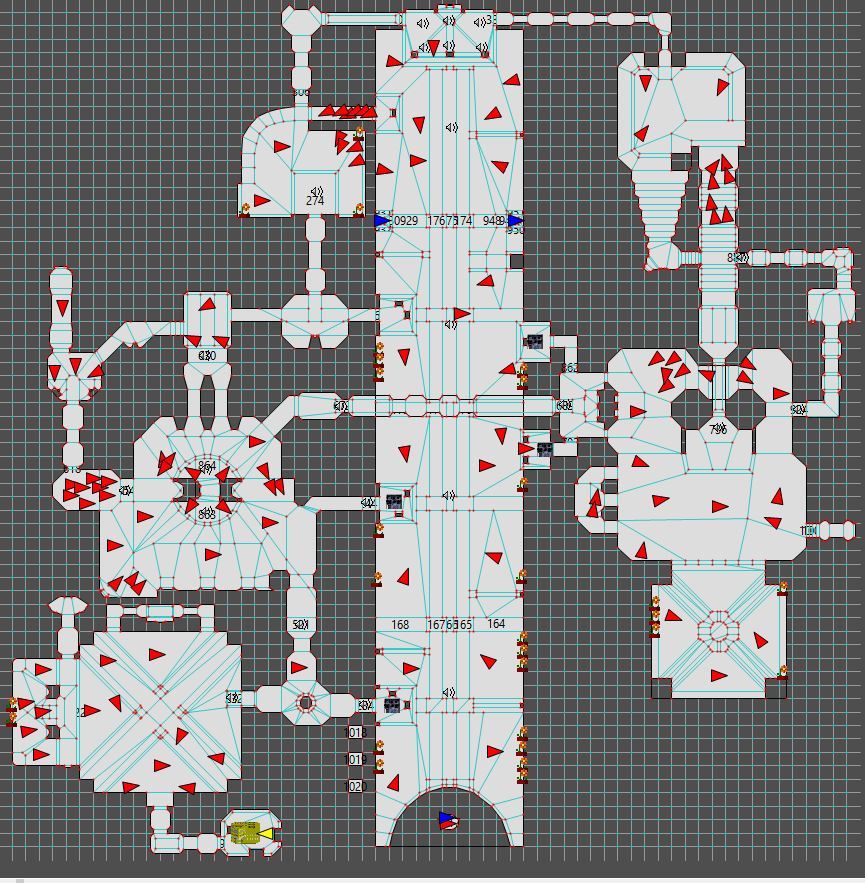 I save as soon as I enter and check in with Hathor. 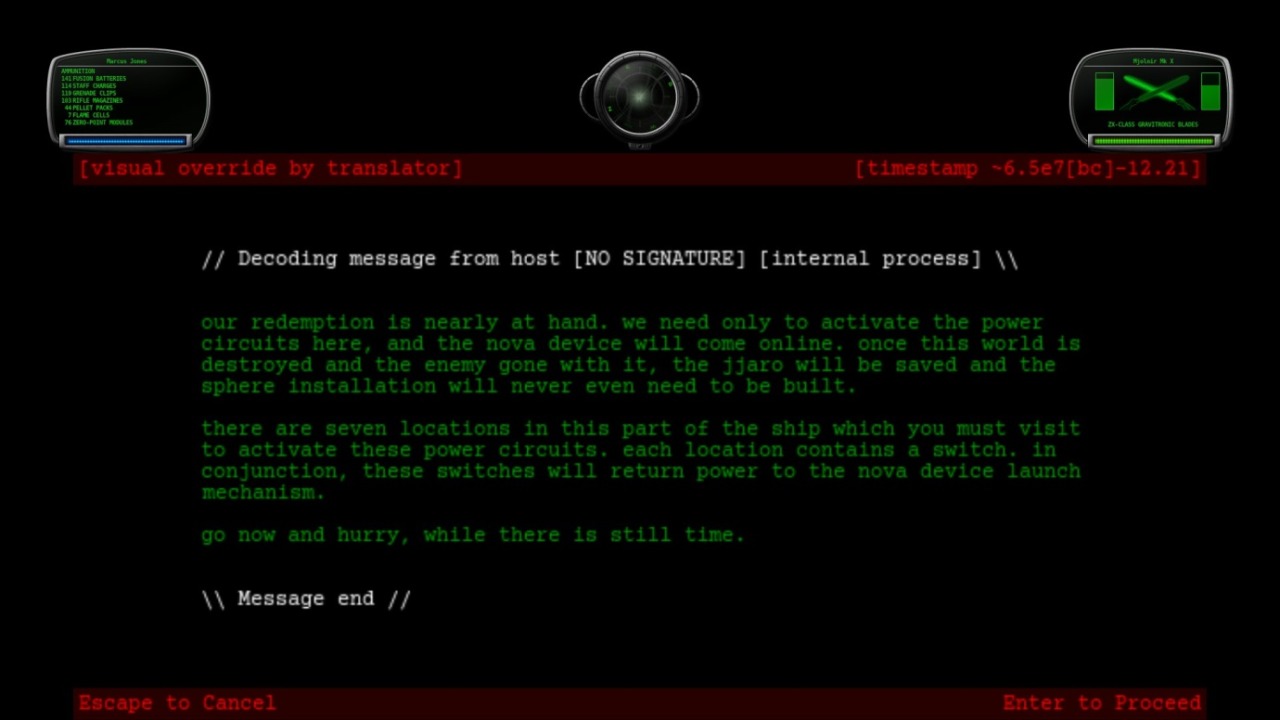 Just through the door down a short hall, I open what seems to be some kind of altar. 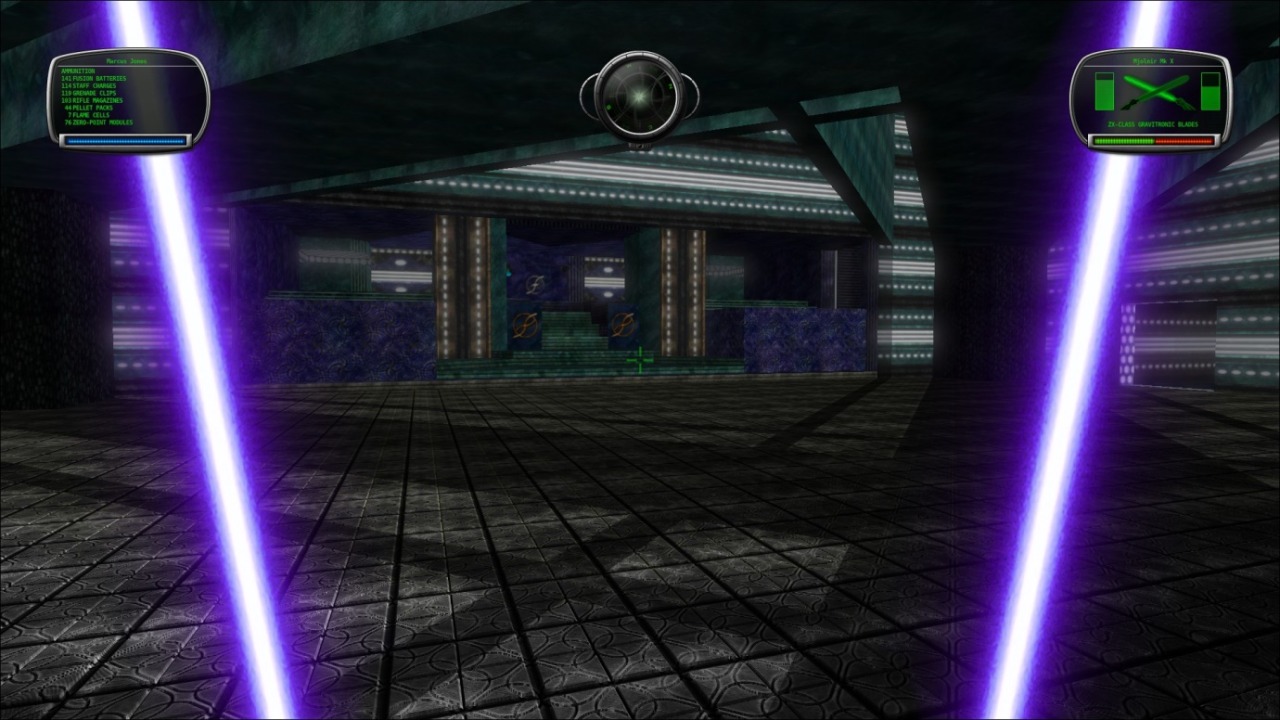 Now, here’s an aside on the Gravatronic Blades. The original HD sprite for them in Eternal X 1.1 sucks as they block a large chunk of your vision, making them impractical. Contrast to their normal sprites in 1.1 and the original Eternal X. The 1.2 Dark Energy Swords are closer to the latter while still being an HD upgrade. 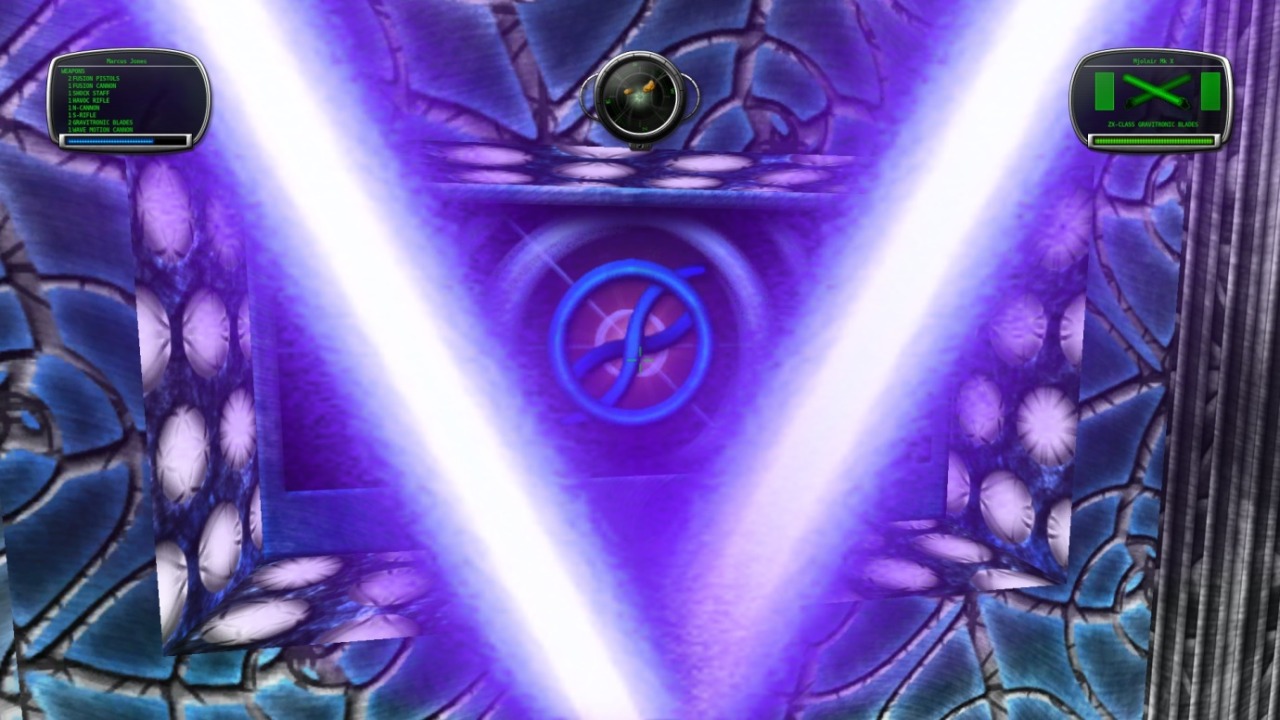 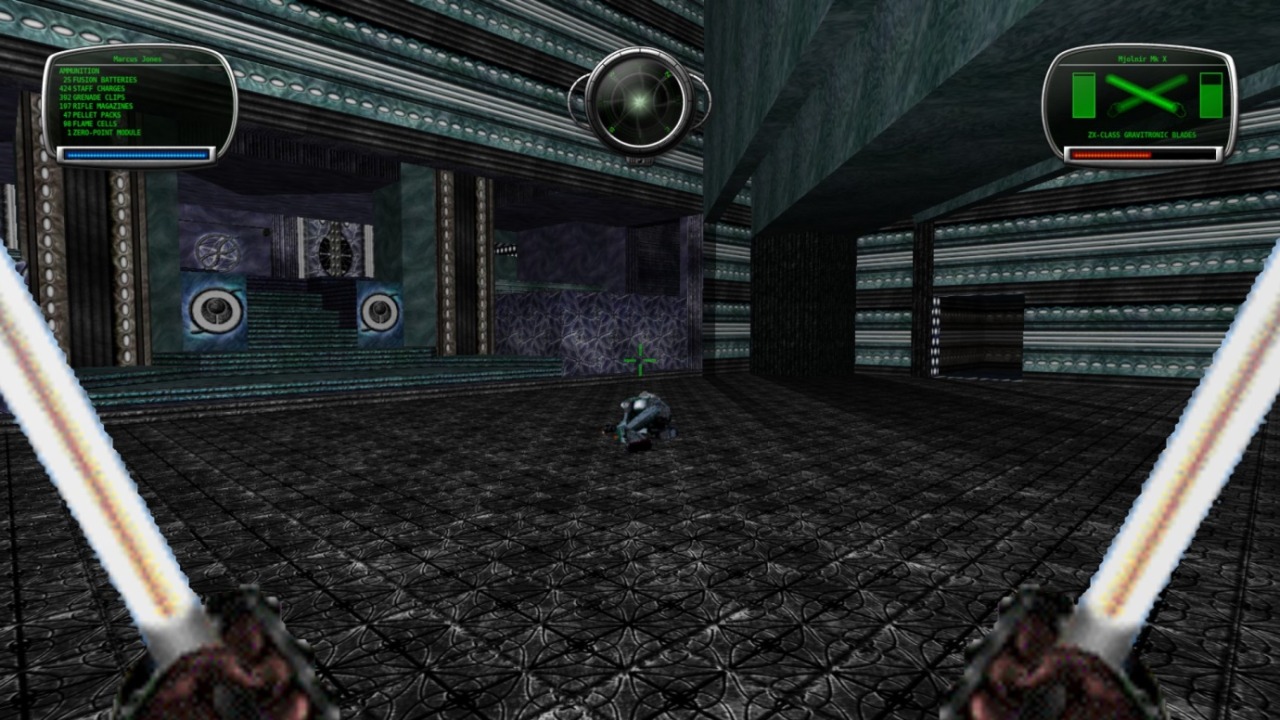 A switch on the alter in a purple alcove starts the lift and I take it to another lift into a small raised booth with a chip and slot in it. 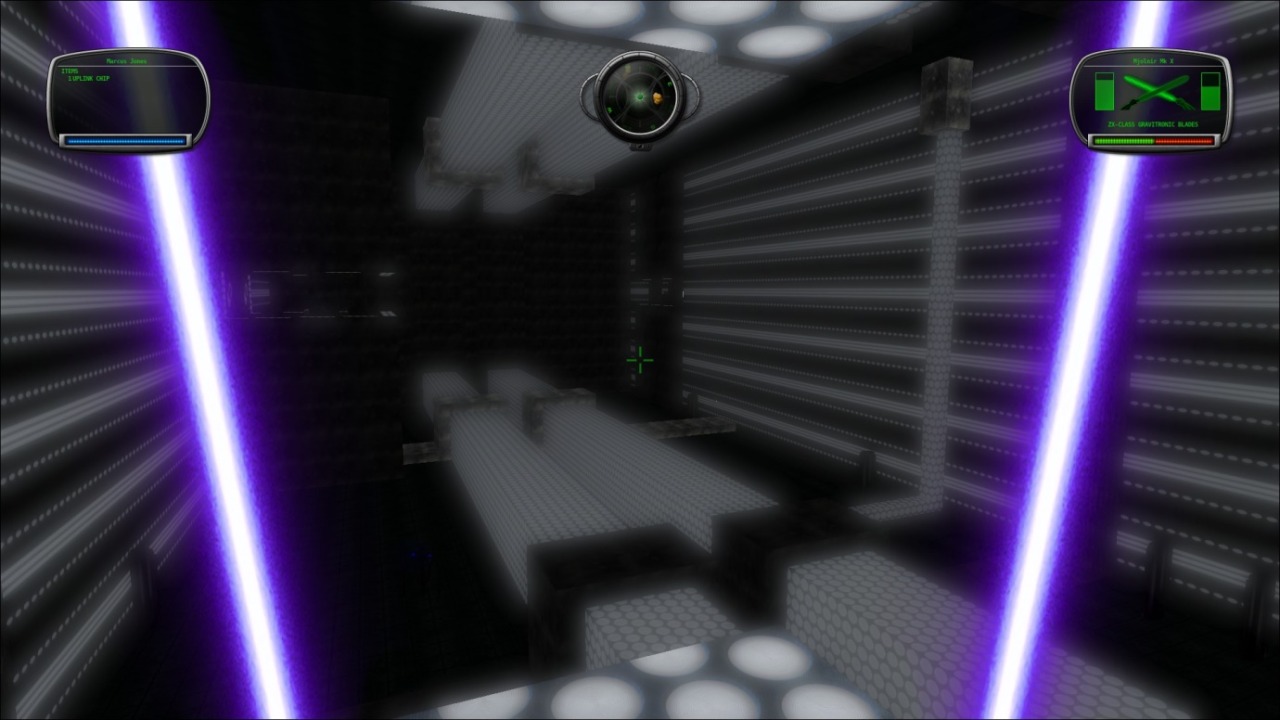 This is the Jjaro version of what we saw on the Pfhor ship in Killing the Giants As they Sleep i.e. Forever My Greatest And Only Love, a weapon that pierces stars and bursts them. Trih Xeem, Early Nova. Using the chip and button opens a hidden door north of the hall below into the room with a round structure and health terminal. There’s a passageway under the Trih Xeem firing tunnel to another 2 booths with a chip in the side of the tunnel. There’s another one just off the round thing room too.

The round structure has a much needed shield charger and pattern buffer, so the health terminal in the same room becomes useless once you know a shield one is there. I head north from here via the door on the west ledge, passing through a square room with a purple carpet to another booth in the firing tunnel. At the northernmost of the map is the final 2 booths. 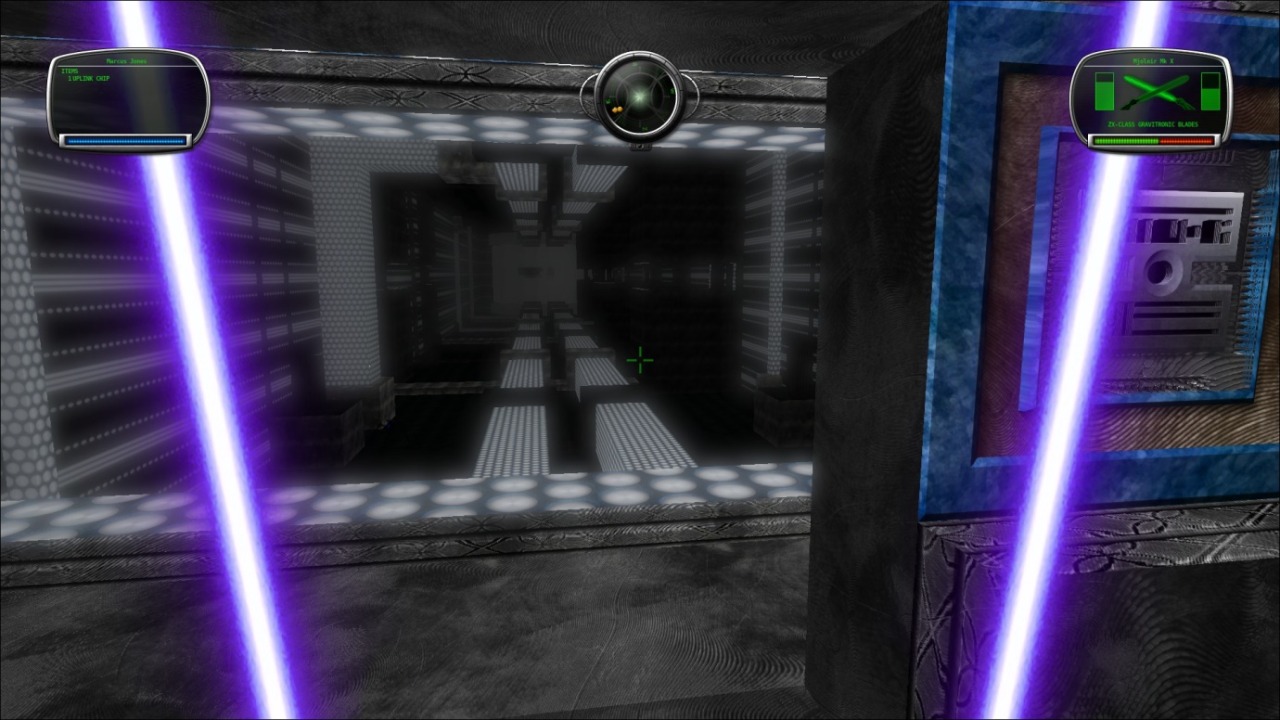 The Trih Xeem firing tunnel looks a lot like the Death Star’s main weapon firing tunnel doesn’t it? This is especially true if you’ve played both the Xbox and PSP versions of Star Wars: The Force Unleashed.

I run through some nicely decorated hallways on the east side to a big hanger like area. 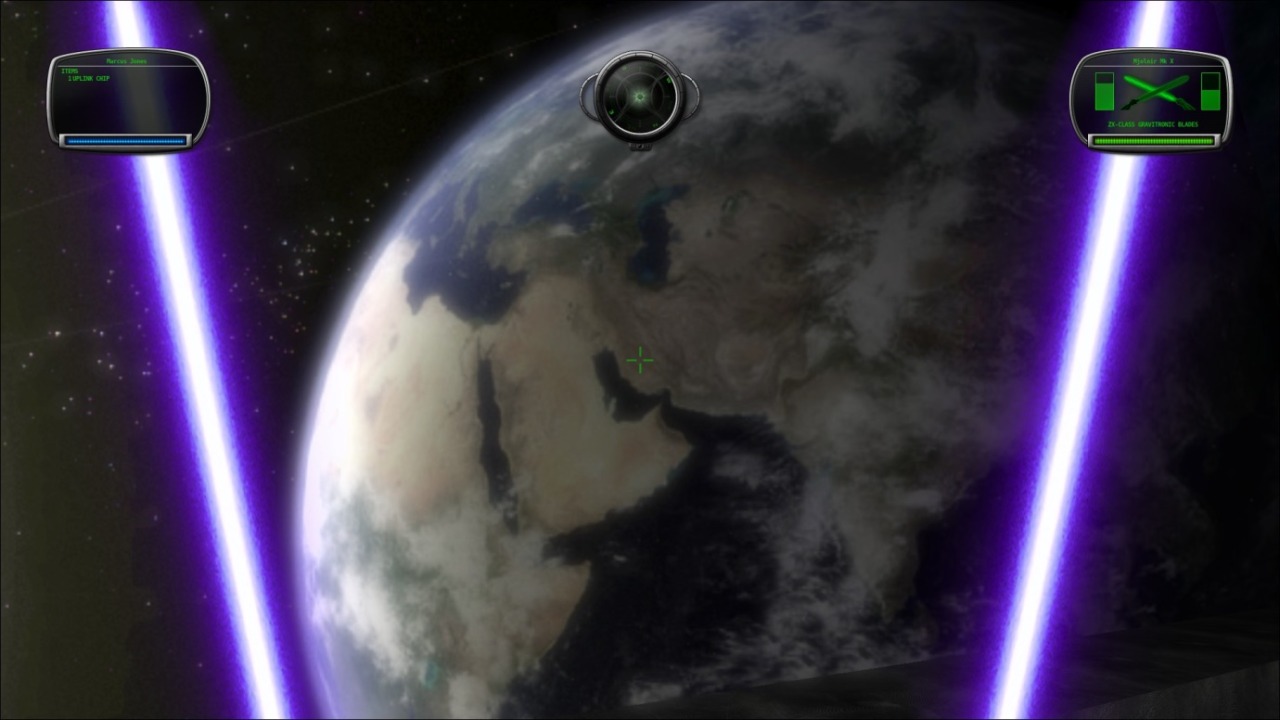 What planet is that? It looks like Earth. It looks like it might be made using an edited Earth photo but I don’t know what it’s meant to be. 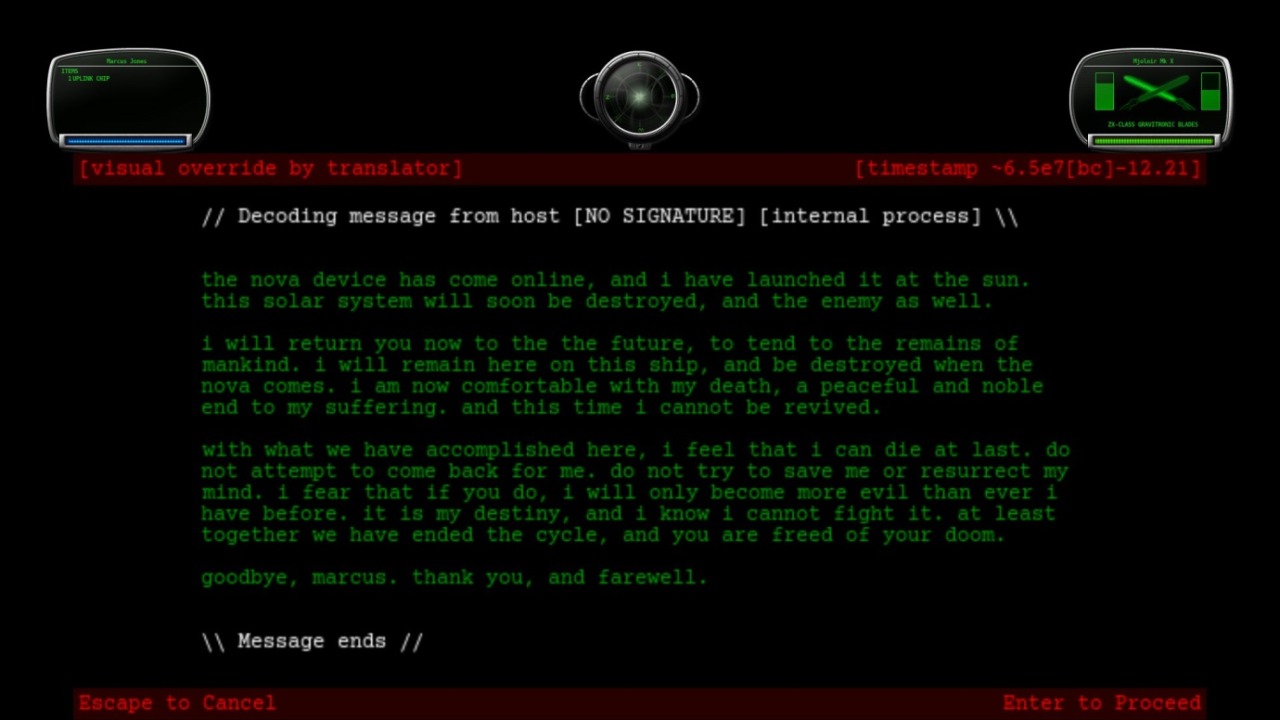 Act 3: The Philosophy of Time Travel 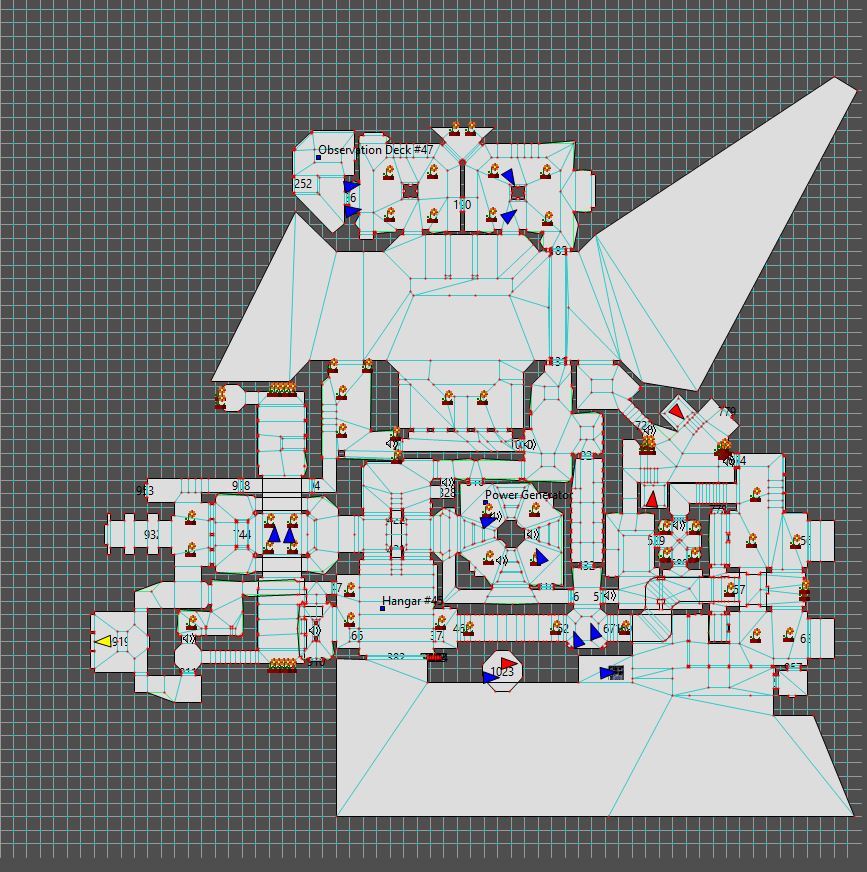 I’m back on Inti Station again, and for the final time. The good news is that there’s no flames of disaster this time for obvious reasons. The bad news is that the W’rkncacnter is fully awake again and all the Wrk's dream monsters are present here, just like the other Chapter 5 levels. The terminal doesn’t work so I try to do the same as I did before. However, it turns out I have to place a chip in the generator to bring the power back on.

I could just cheat and use the spare I have but I want to see the rest of the new areas so I find out I can finally use the airlock and explore outside. 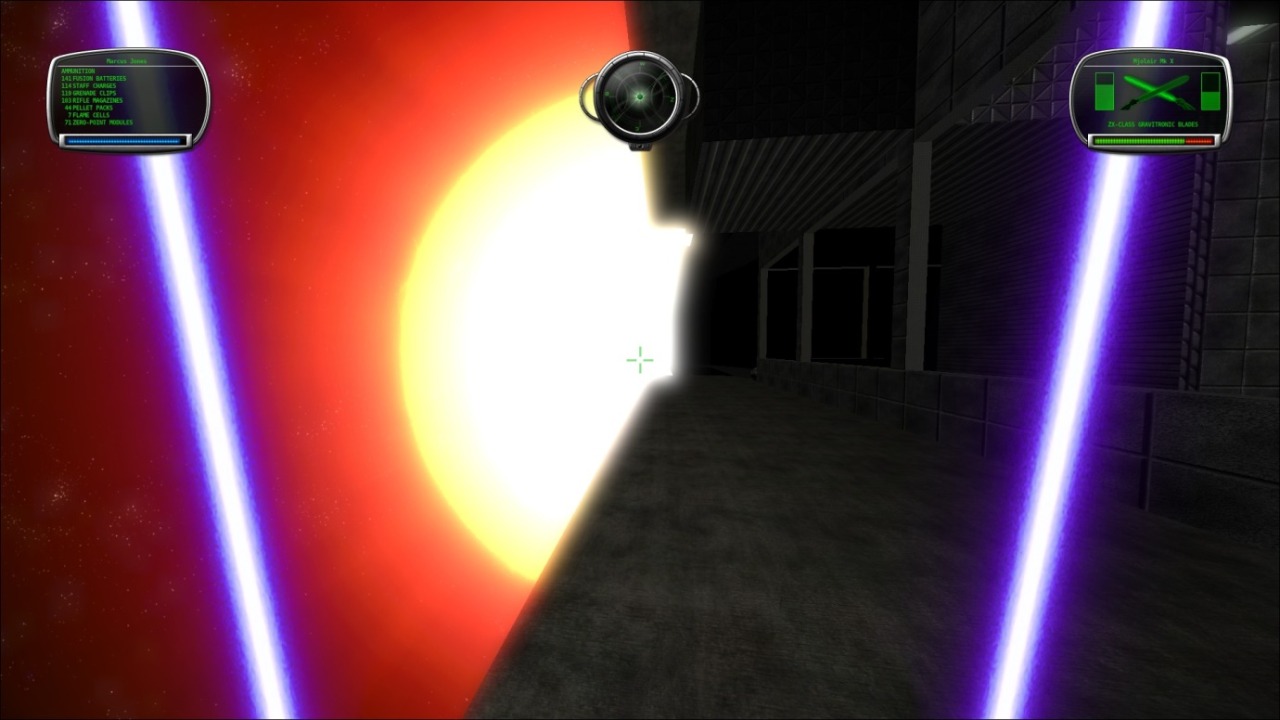 Don’t jump off into space however as the sun will burn you and there’s no way to float back into the radiation shields. It’s achieved with major ouch polygons. 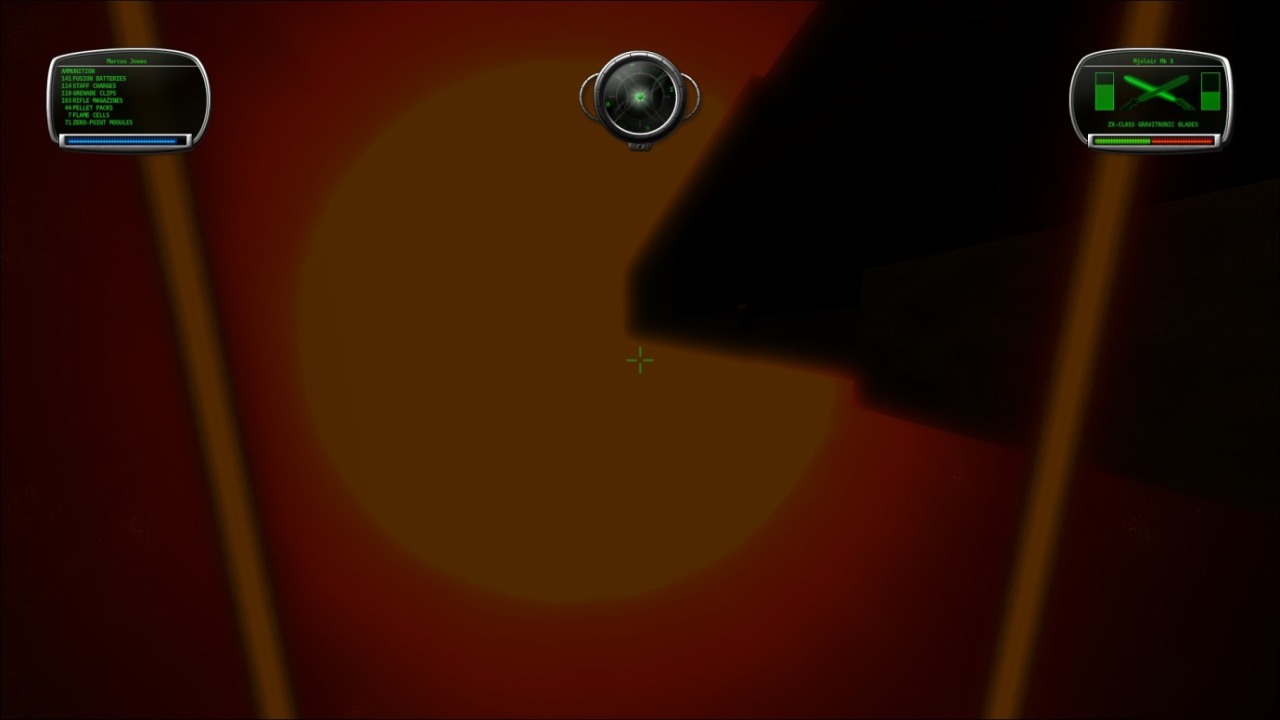 The chip is as far along the station as I can go. 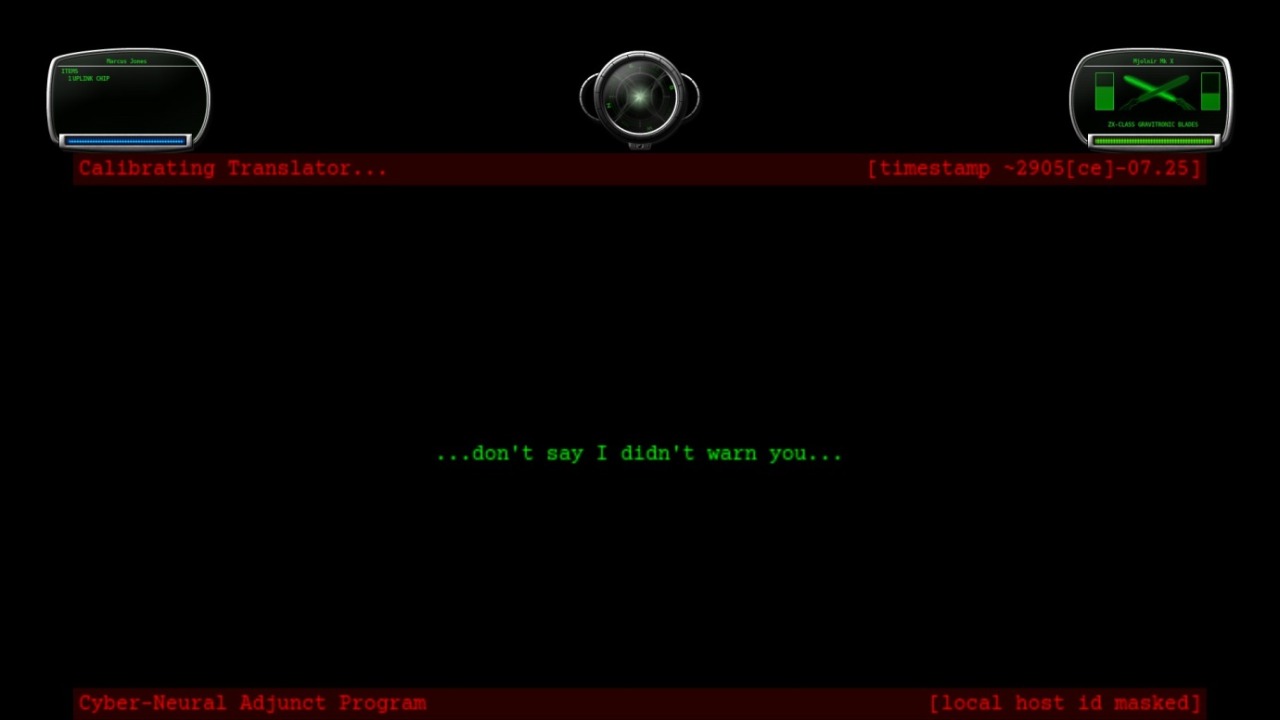 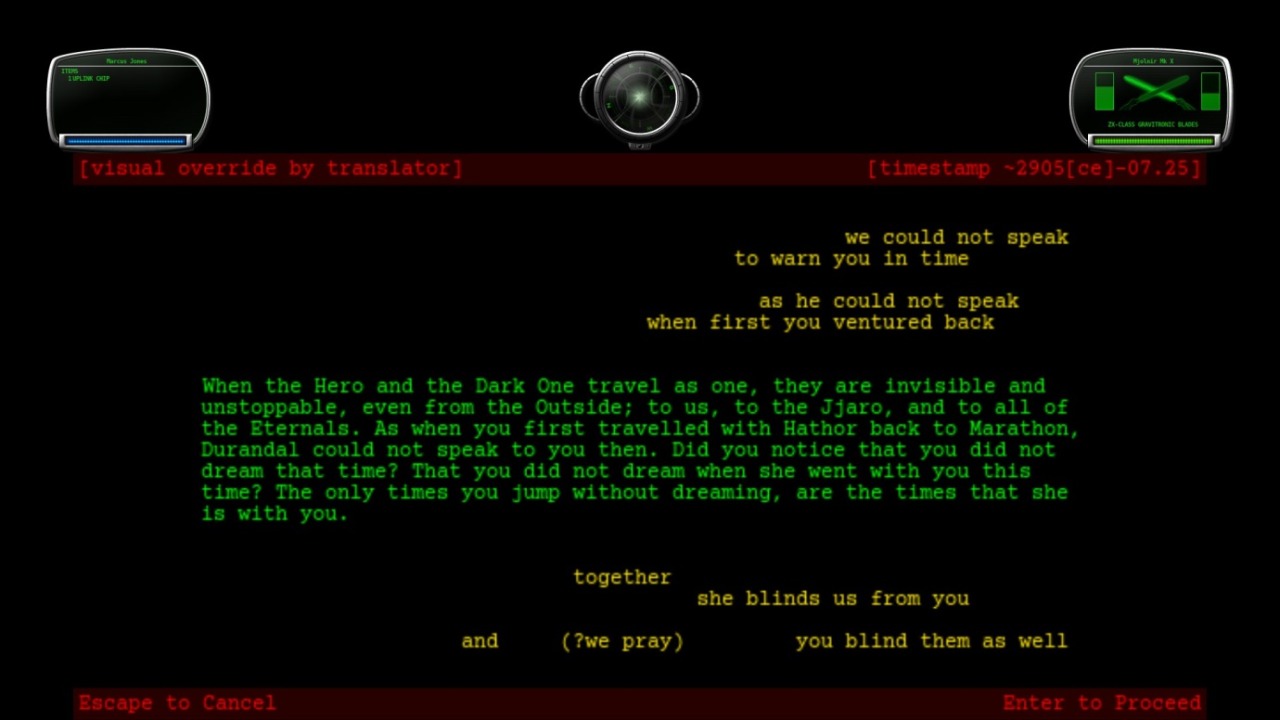 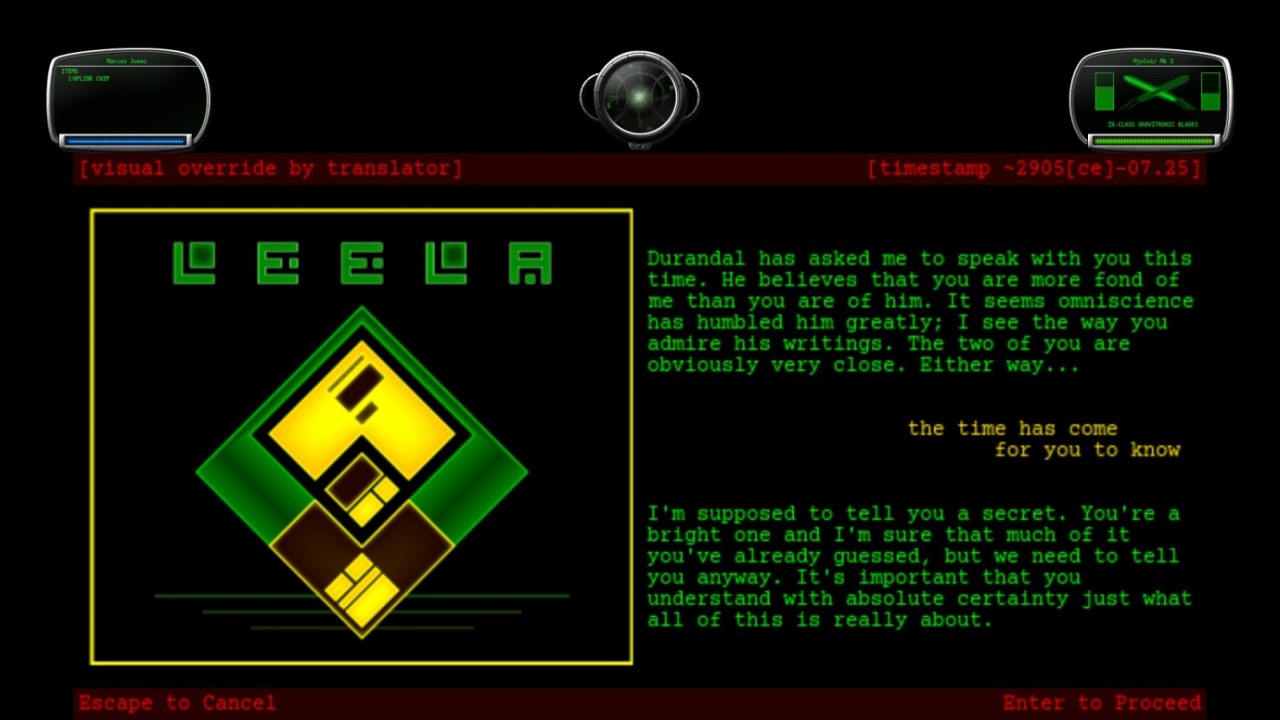 And about fucking time too! Bungie aren’t saying so Forrest has done it for us. 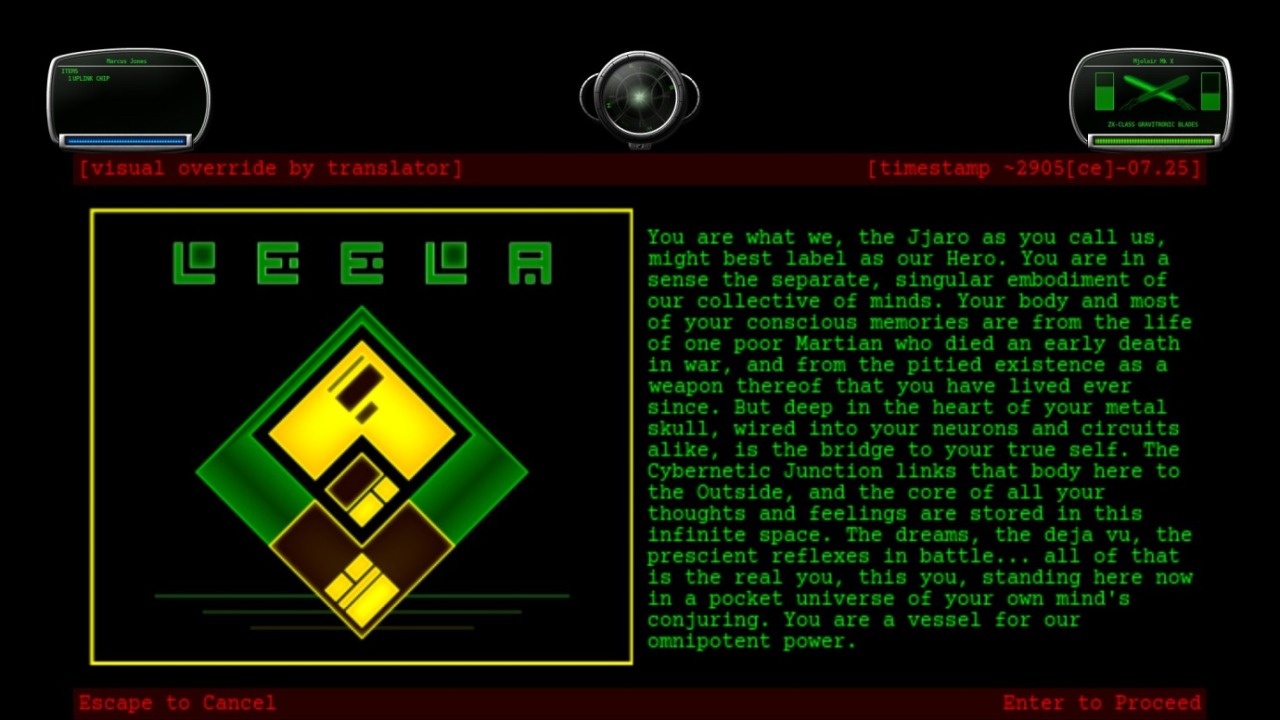 I…died after the events of *REDACTED*, and was rebuilt as a battleroid, though I’m not sure if I was part of the Thermopylae/Onicus war or not. I guessed as much but I did not guess that one of my cyborg parts is a Cybernetic Junction that backs up my memory, my soul indefinitely in the Macroverse.

After being brought back as a battleroid with those implants and cybernetic junction, I have now essentially become a Jjaro myself. Now the remains of the ascended Jjaro are using me as essentially the Doom Slayer crossed with the Doctor. (First and Third ones preferably, just like my favourite Marathon games next to this one) All of my better reflexes, waking dreams, deji vu, it’s all my mind’s eternal backup server, here in the Macroverse, in a pocket dimension of my own making dreaming about one potential end of the world.

This is like if Master Chief and Noble 6 from Halo Reach were the same person, and the latter became the former if he was rebuilt using Forerunner tech after Reach was glassed, and said stolen Forerunner technology marked him as the Forerunner Librarian’s own personal alien Jesus. Except that analogy doesn’t really make sense even if the last bit about the Librarian is true as of Halo 4, but more to do with John’s bloodline instead of his becoming a Spartan.

The Halo SPV3 Tour of Duty's Primer is that way if you don't know who the Librarian is. The Halo 4 centric bits are better covered if someone does an LP of Halo 3 & that game in the future, like VBB did Halo 1 and I did SPV3. 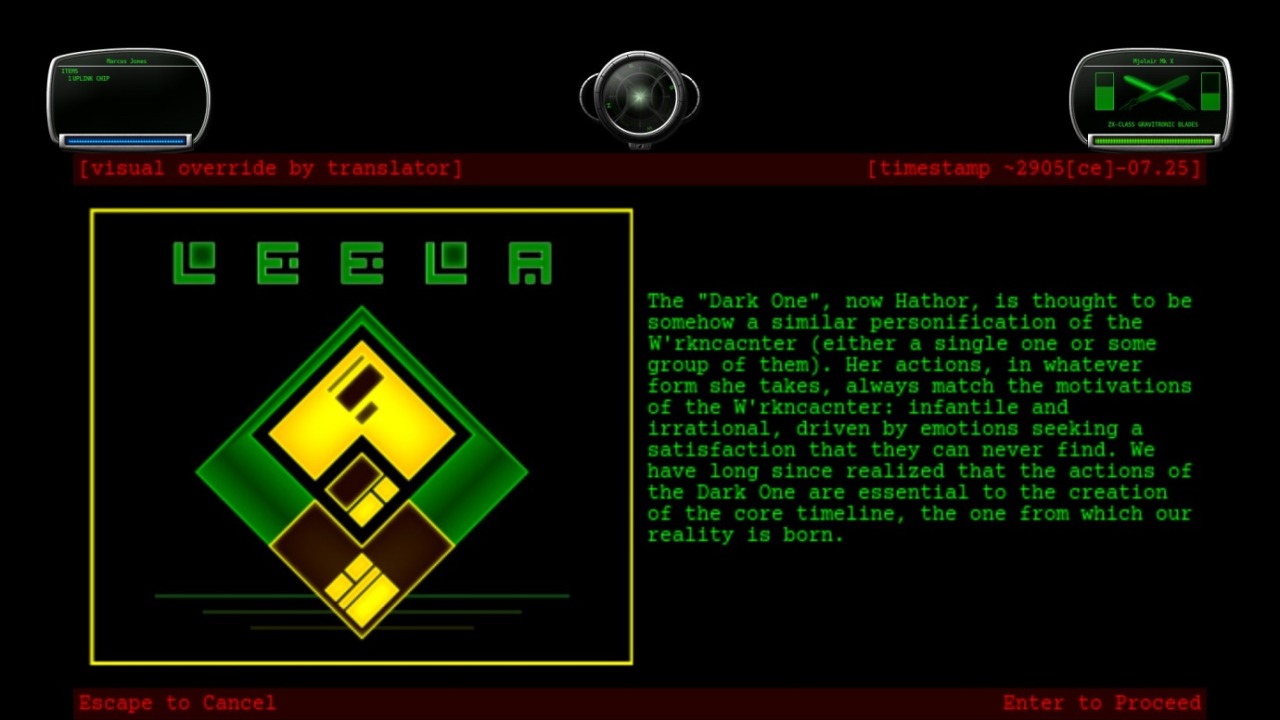 The W’rkncacnter were aiming for this. The moment Hathor’s soul would shake violently and yearn for despair with tears she can no longer cry. 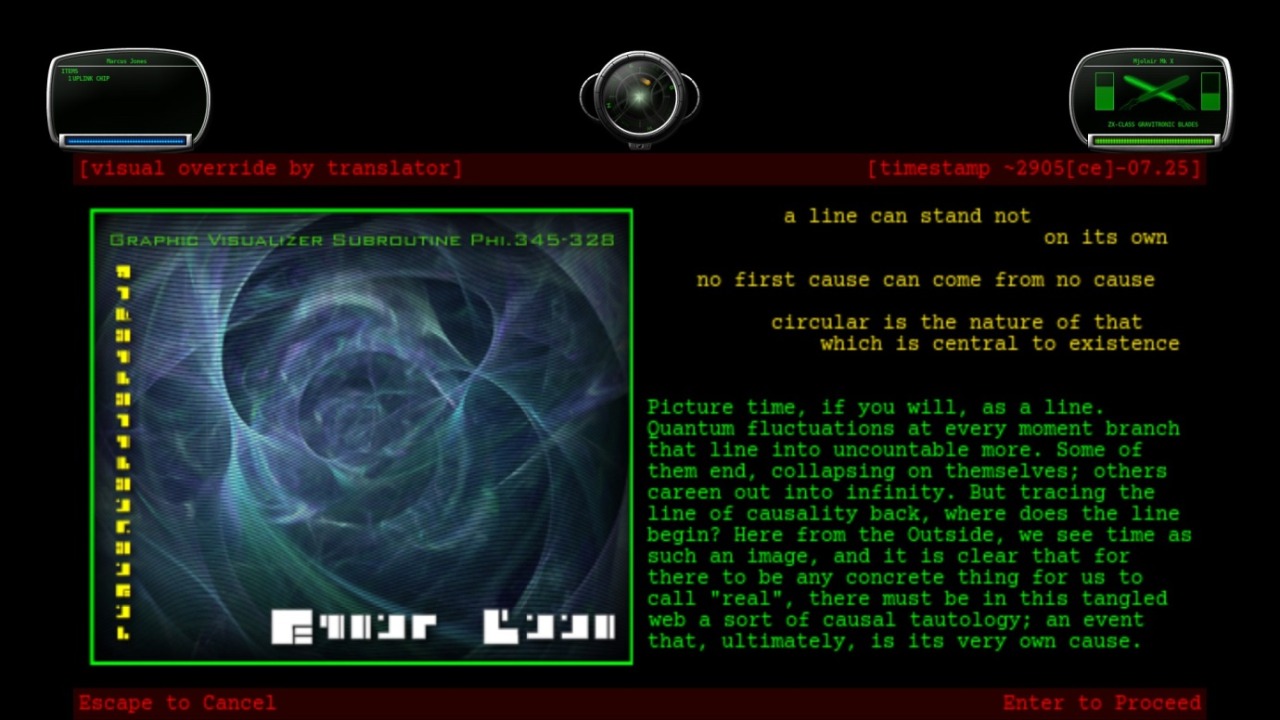 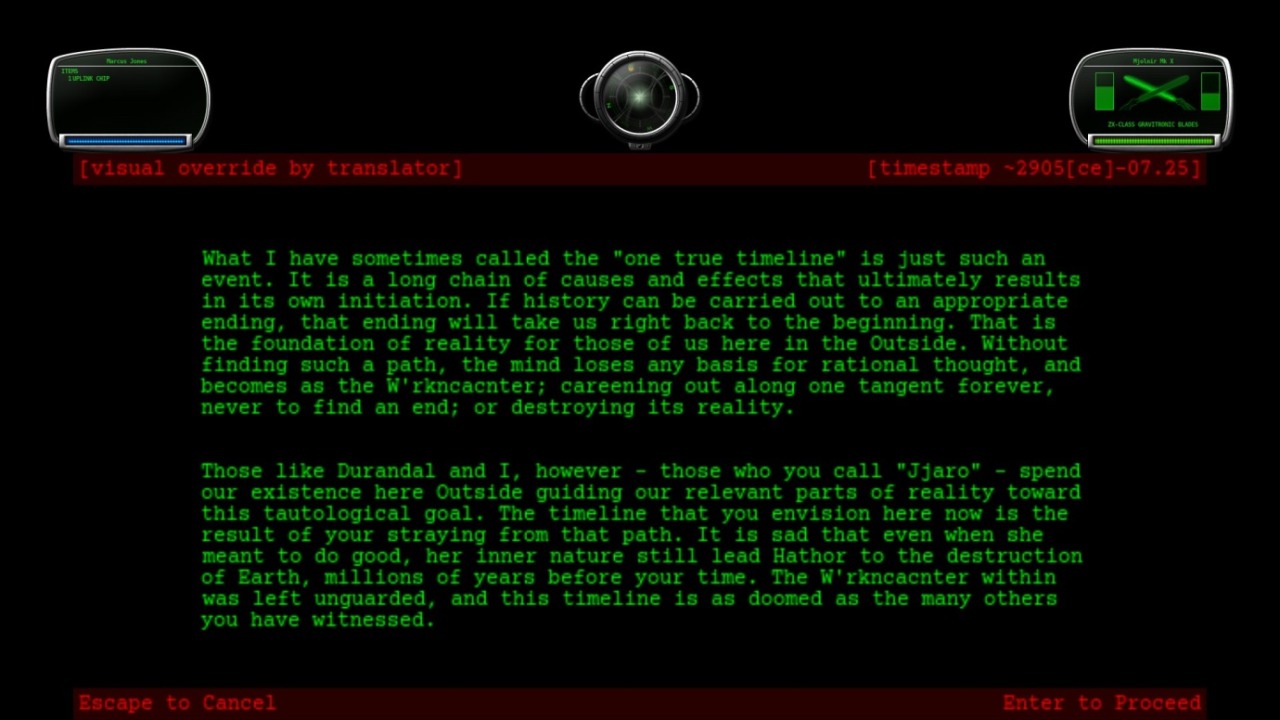 Marathon always had Space Odyssey inspirations as opposed to Halo’s Alien ones and this just proves it further.

She may not have become the Flames of Disaster, Sekhmet this time, but Hathor could not avoid the other title of the W’rkncacnter Trigger even now. Poor Hathor probably didn’t even realise that the W'rkncacnter are transsentient, ultra-dimensional lifeforms that can create new dimensions and ether code for the universe (i.e. the natrual/physical/chemical etc. rules that govern how the universe works) constantly, and may not even be aware they are doing it. Killing even just one here and now, let alone before like I did with Hathor won’t mean anything. 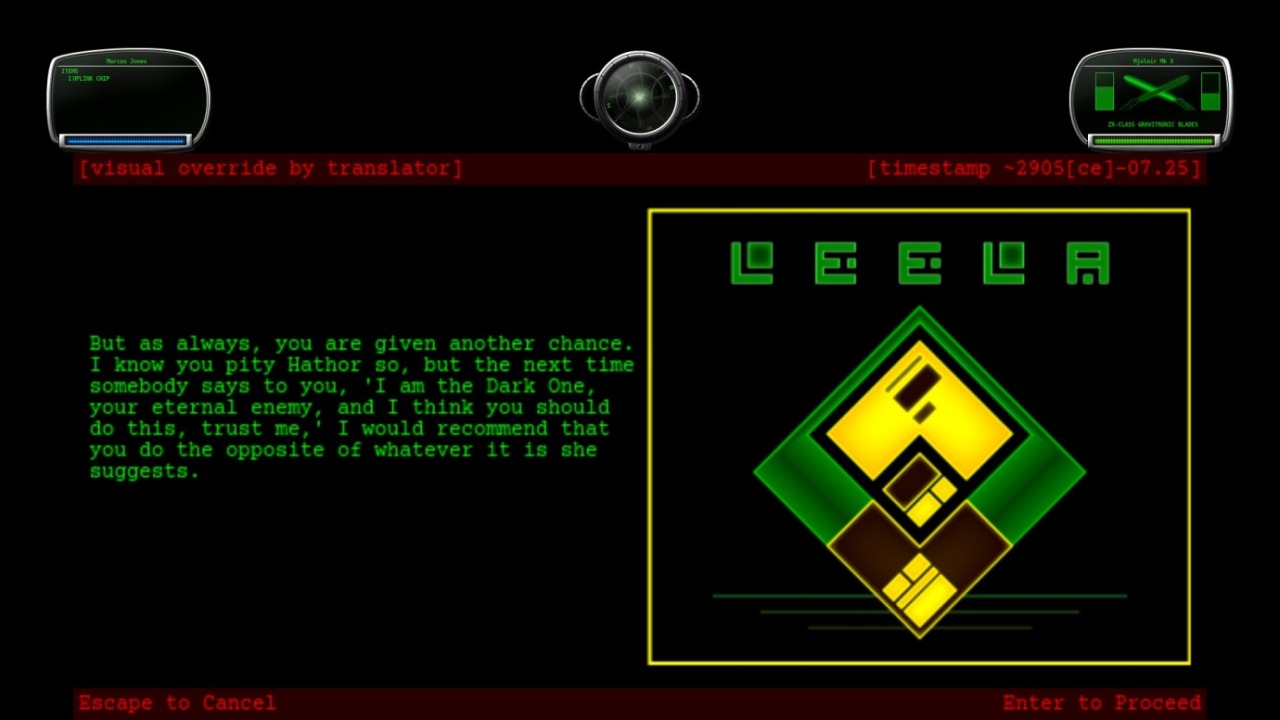 Wait. It’s not like I’m out of options yet. I should be able to change this future if I return to the time I was in and…urrrgh. Light the ring. 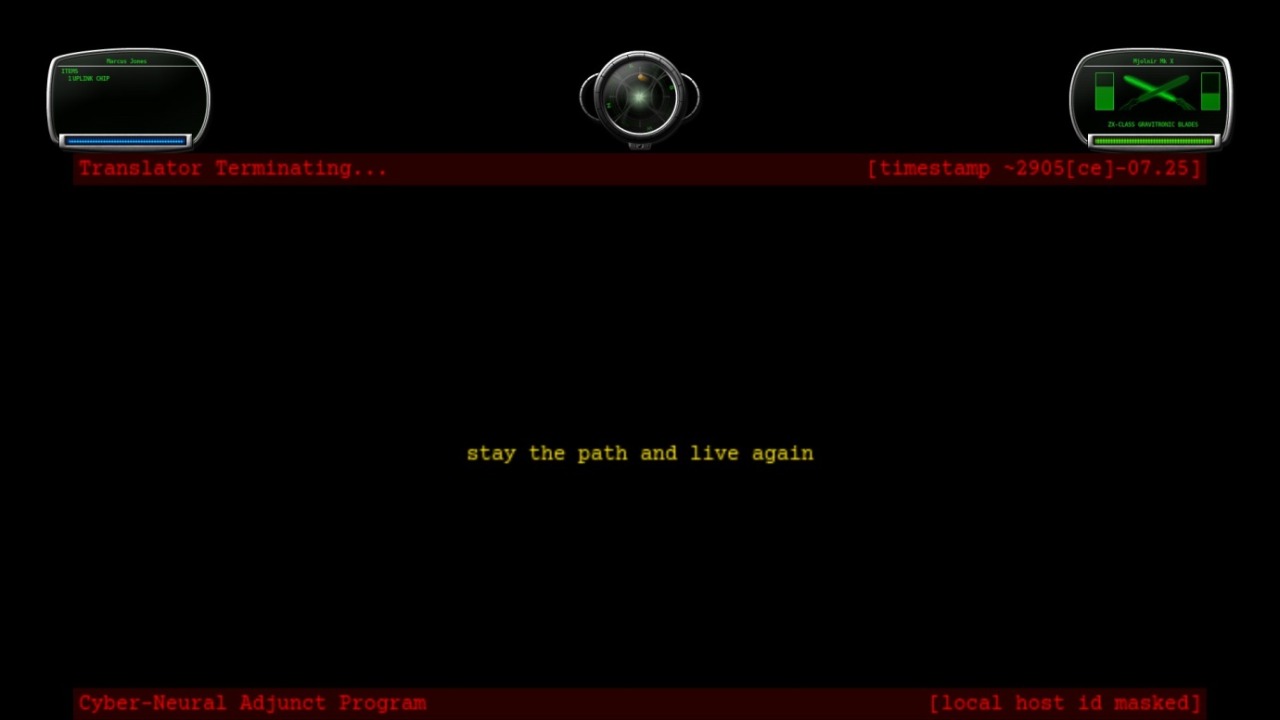 So I head back to where I was. I’m sorry Hathor, but I won’t be able to heed your advice this time. It’s the Final Run. Tune in next time for the exciting conclusion of the Marathon Eternal X Omega 1.2 Tour of Duty: Chapter 5 Stage 3: End of the World. Don’t miss it!