Toward the end of the SPV3 Tour of Duty, I've been doing a lot more work with Pixlr Editor and recently Pixlr Editor X. Wren has suggested better free software I can actually download but I forgot its name so I haven't got it just yet.

I thought I'd share Marathon and Halo related art -some rather tangentially- I made using this software, especially more recently. And by "art I made" I mean "cheap photoshops I stitched together with as much care as I was able with the tools I had at the time, like a mad doctor with a vision".

This first one isn't technically Marathon related unless you count the bleeding this anime has into the Trilogy for me (which I reflect in a few things such as my profile name & pic), but I'd wanted to make a Tomb Raider Legend joke since I first saw that episode. I'd rather have added Tomb Raider 5 Zip's actual FMV model and not a crappy snip of a scene he's in, but the only FMV model for Zip I could find was a boring T-pose one. 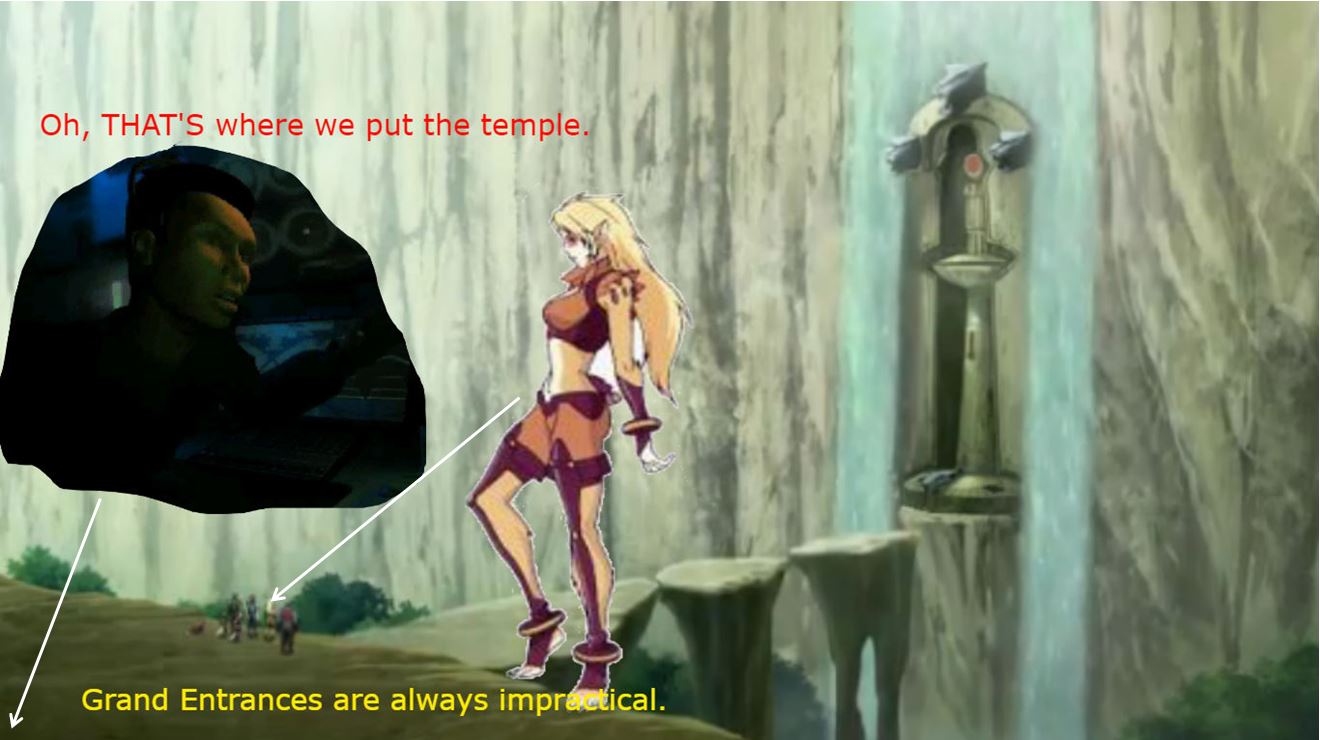 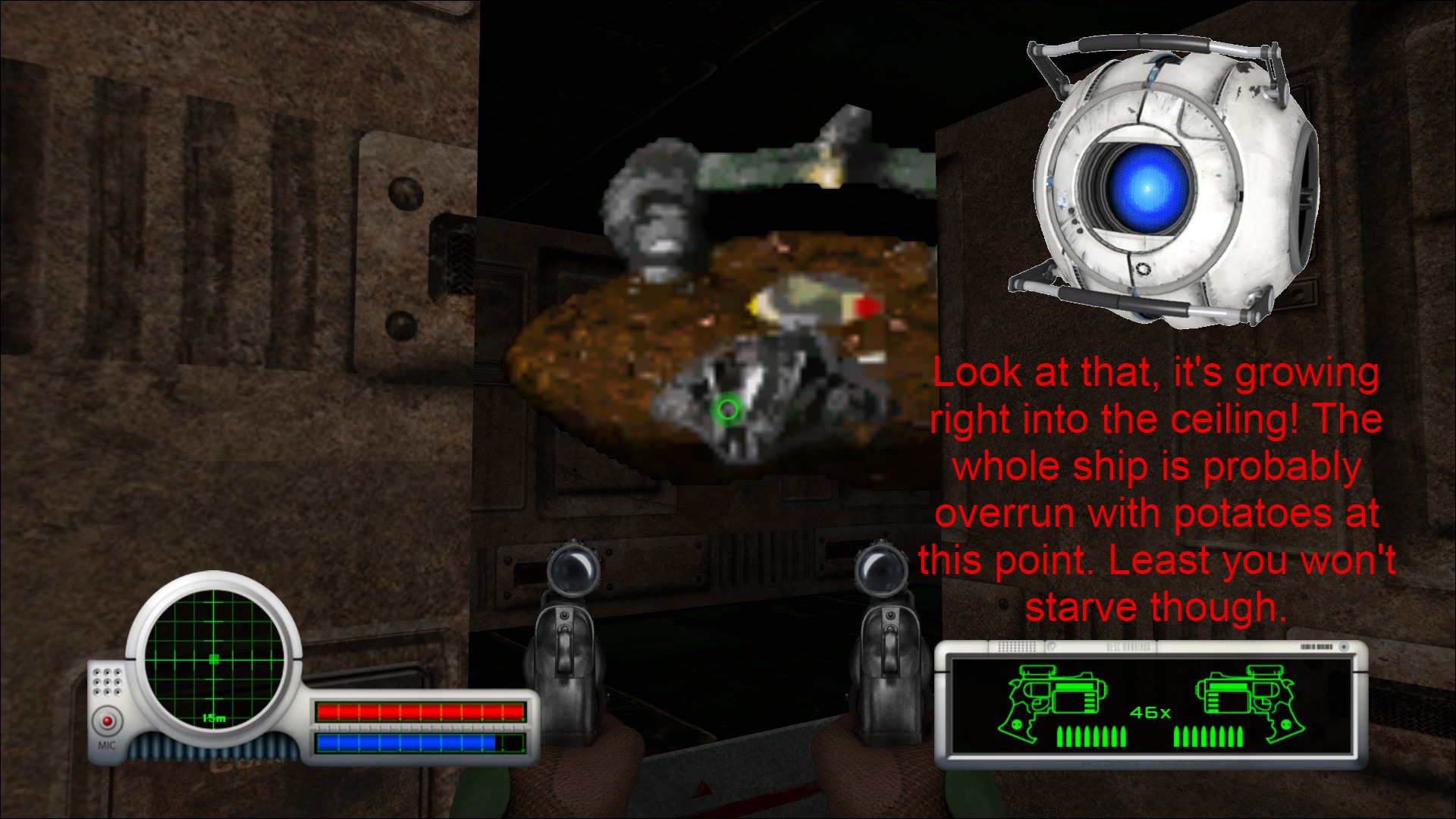 When I played the older alpha of Marathon Redux (just recently beat the latest one), I found that someone had put a Pfhor shuttle sprite inside the maintenance tunnels on Smells like Napalm. I didn't recognise it at first and thought it was a giant potato partially wedged and growing into some pipes, despite the metal bit at the front.

Of course, Marathon does have a Portal 1 style sense of humour, shown mostly by Durandal so this works out alright. 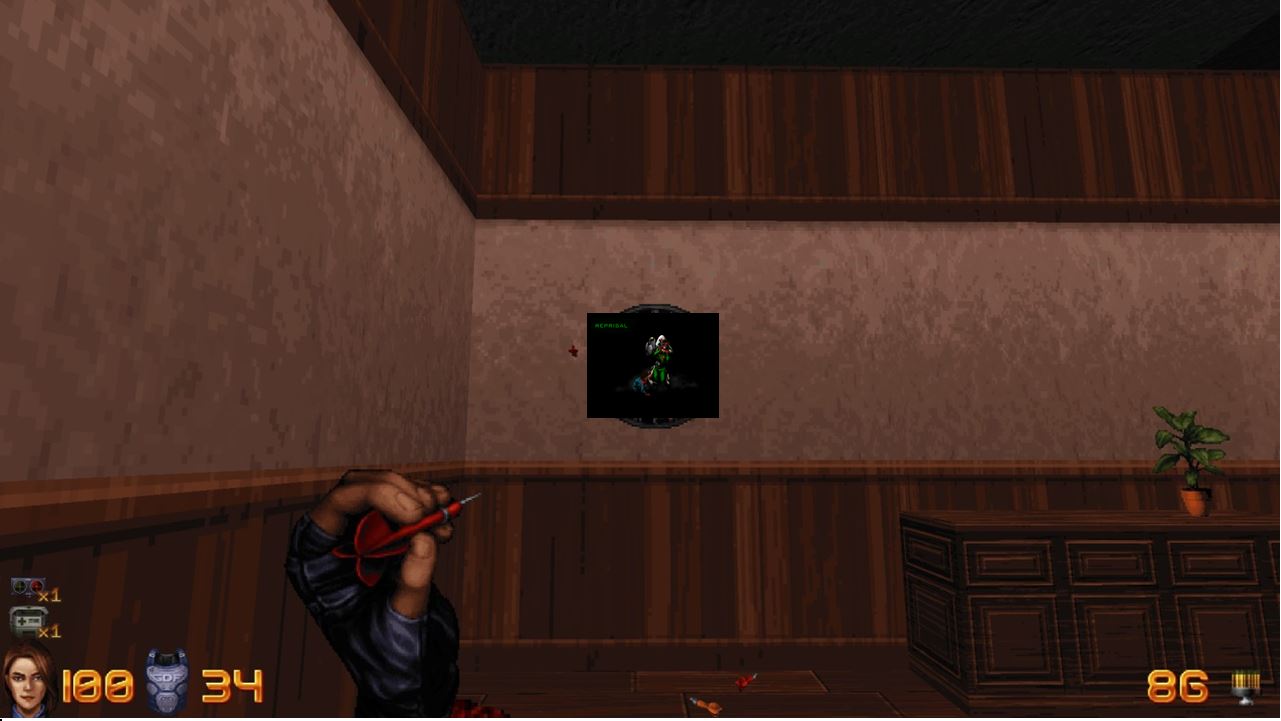 Everyone hates the escort quests in Marathon 1 Classic and M1A1, especially Bob-BQ. At least on the Rose in M1 Classic you can save at least half of the Bobs on Total Carnage even though it won't count as a win. I should know: I counted them last time I played M1.

So here's where we can vent our frustrations on those levels, when we aren't playing the Redux versions which I do like as they're fixed. The game is simple: I just need to hit that green, gangly, malicious little snake attacking the human between its eyes to get a bullseye.

Good thing that Pfhor trooper has it in a headlock!

Space Colony ARK of the Covenant 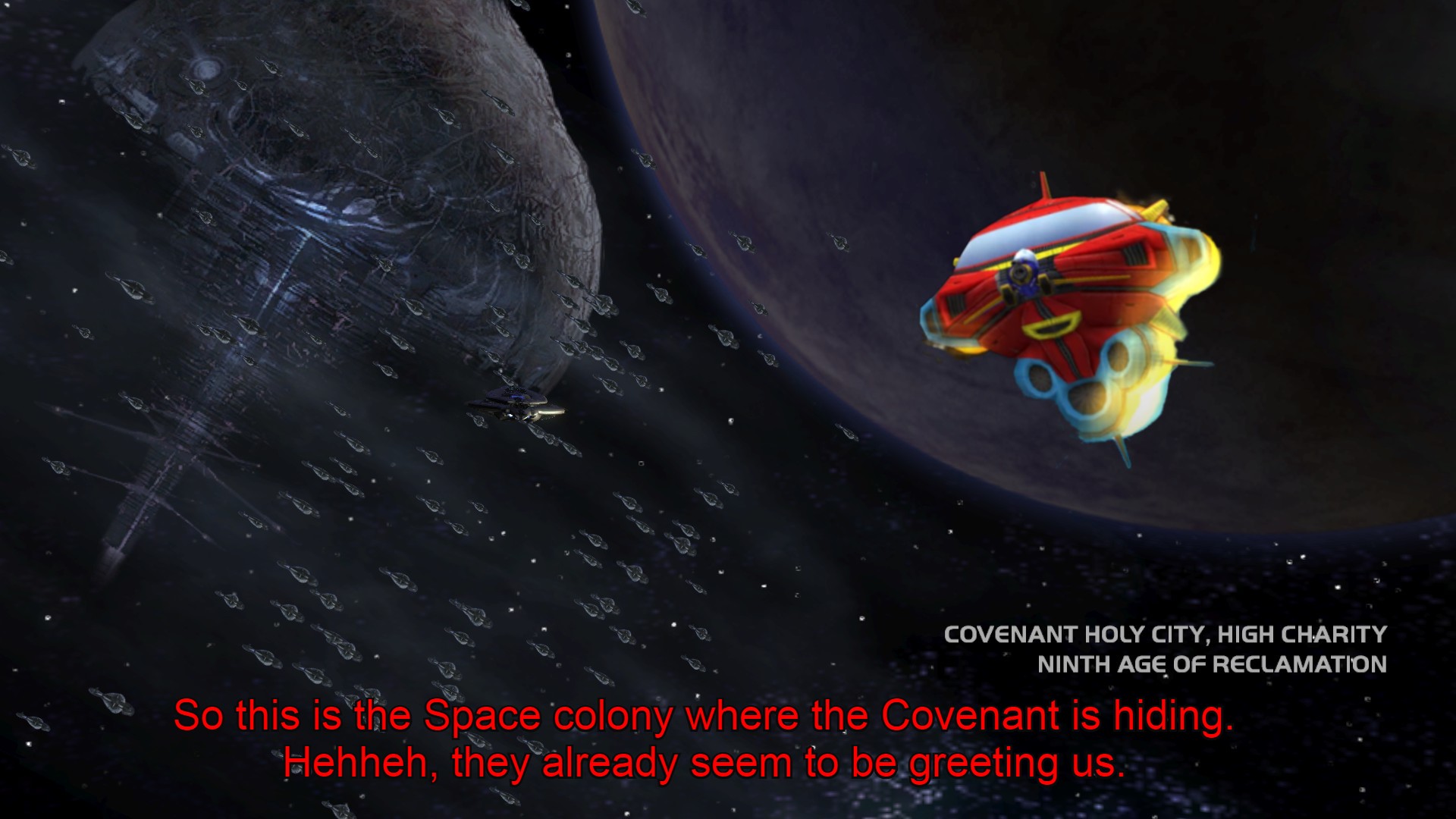 What a kind welcome! Let’s give them a flashy response! Some say it passes through every 50 years and carries a fearful weapon of mass destruction in its core. I tried to photoshop in the shuttle from the SA2 FMV where they arrive at the ARK (Dreamcast version) that I'd display flying towards High Charity, but I couldn't get any satisfying snips of it. So I used the ship with the Tornado 3 wedged in the front from Shadow the Hedgehog AKA Sonic Adventure 3 and added a reference to the Space Gadget cutscene.

Eye of the Storm 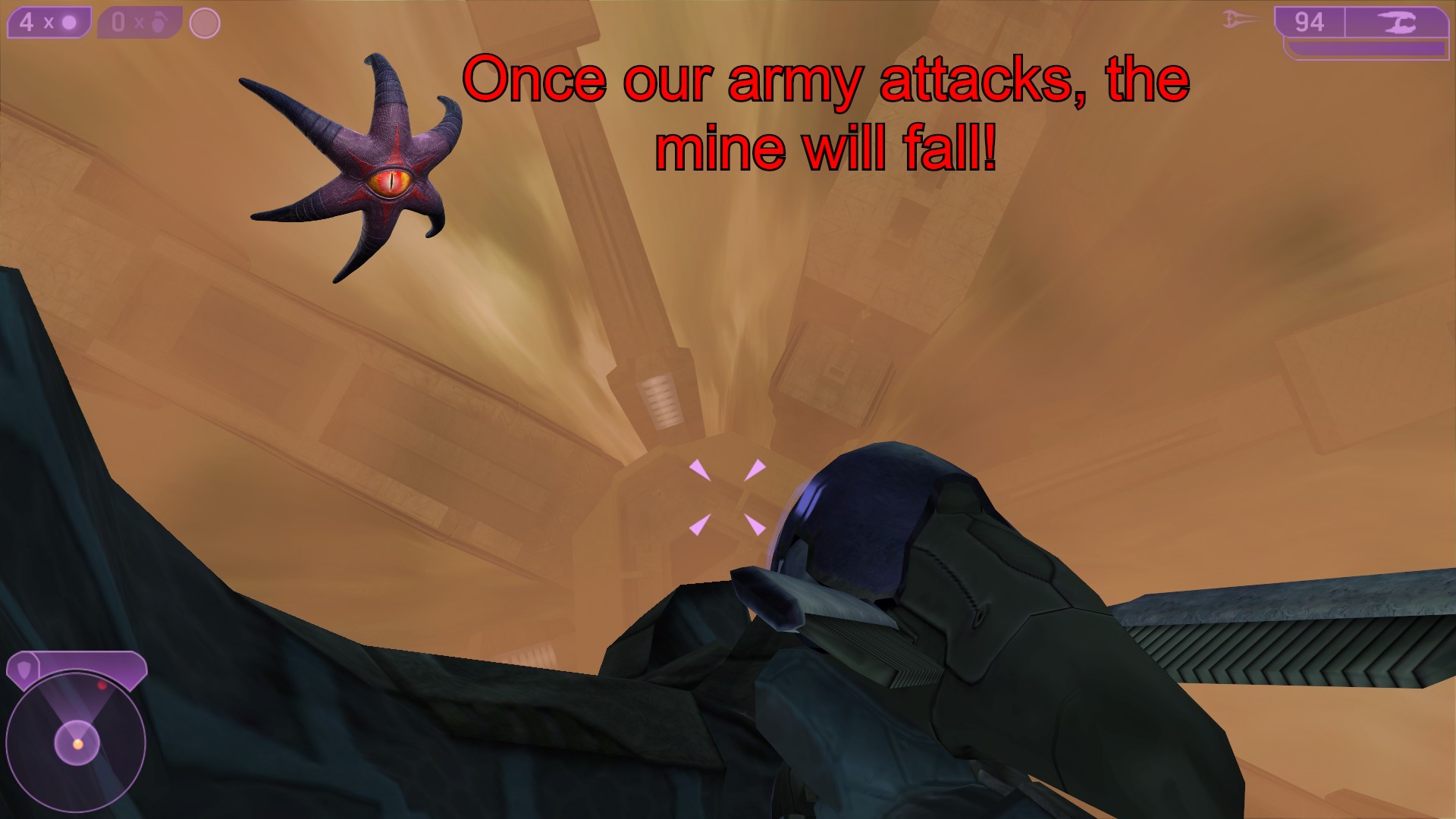 "Arbiter, go! You must hurry on ahead and find that craft, then kill their leader!" I probably should have used the banshee sequence after this, but that only occurred to me after.

The Raccoons and the Lost Index: Arrival at Halo 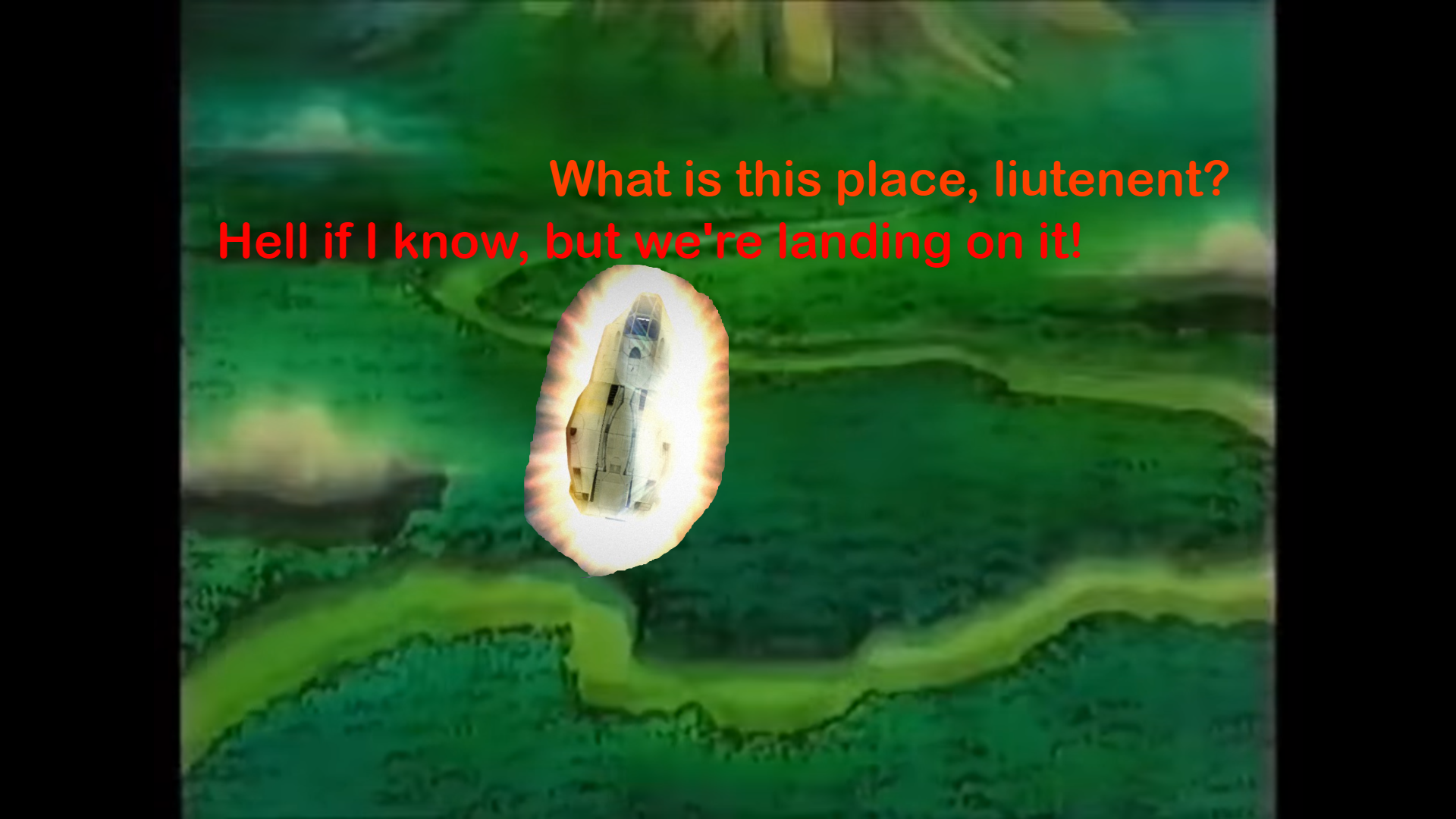 Here's a followup to the Johnson Ending one that I had made first (back then a poorly made attempt at one I will not be posting). The mountain just out of shot is the Control Room that gets blown up in the Johnson image. Needless to say the Control Room fortress is Cyril Sneer's base. As for Flood facilities? Not sure about where you can find those here, nor the Cartographer.

Granted, the movie itself is set on either Requiem or Na Pali as opposed to a Halo but still...

This was made by photoshopping the lifepod in SPV3 during the end of the Pillar of Autumn onto a screenshot I took of The Lost Star using Print Screen. I originally posted this on the Halo Master Chief Collection artwork page where it would be more relevant like other Halo photoshops I made, but some killjoy prick at 343 Industries got it censored, so the one embedded here is from my log.

The original scene is here: https://youtu.be/mwQAHYyPmvI?t=312 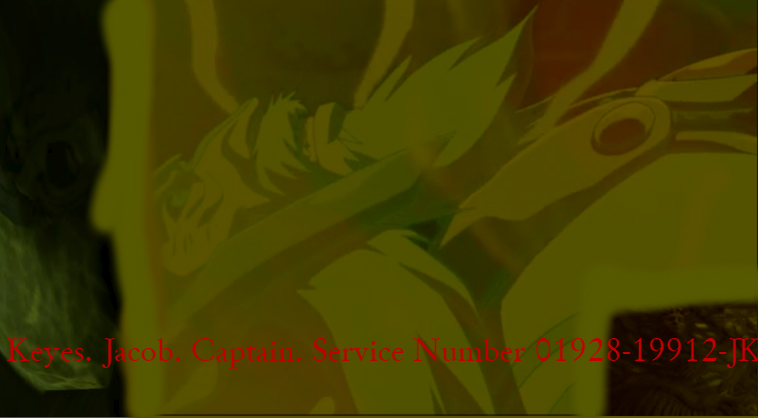 If you've been reading my Halo SPV3 Tour of Duty I've been doing while waiting for Eternal Chapter 2 part 2, I made this image specifically for the Keyes entry, using a shot of a similar scene in Thundercats (the only good one) where Jaga gets fed to a Proto Gravemind at the end of Episode 2, before being forcibly composed and downloaded into an AI capture unit like in Red vs Blue.

The Raccoons and the Lost Index: The Maw 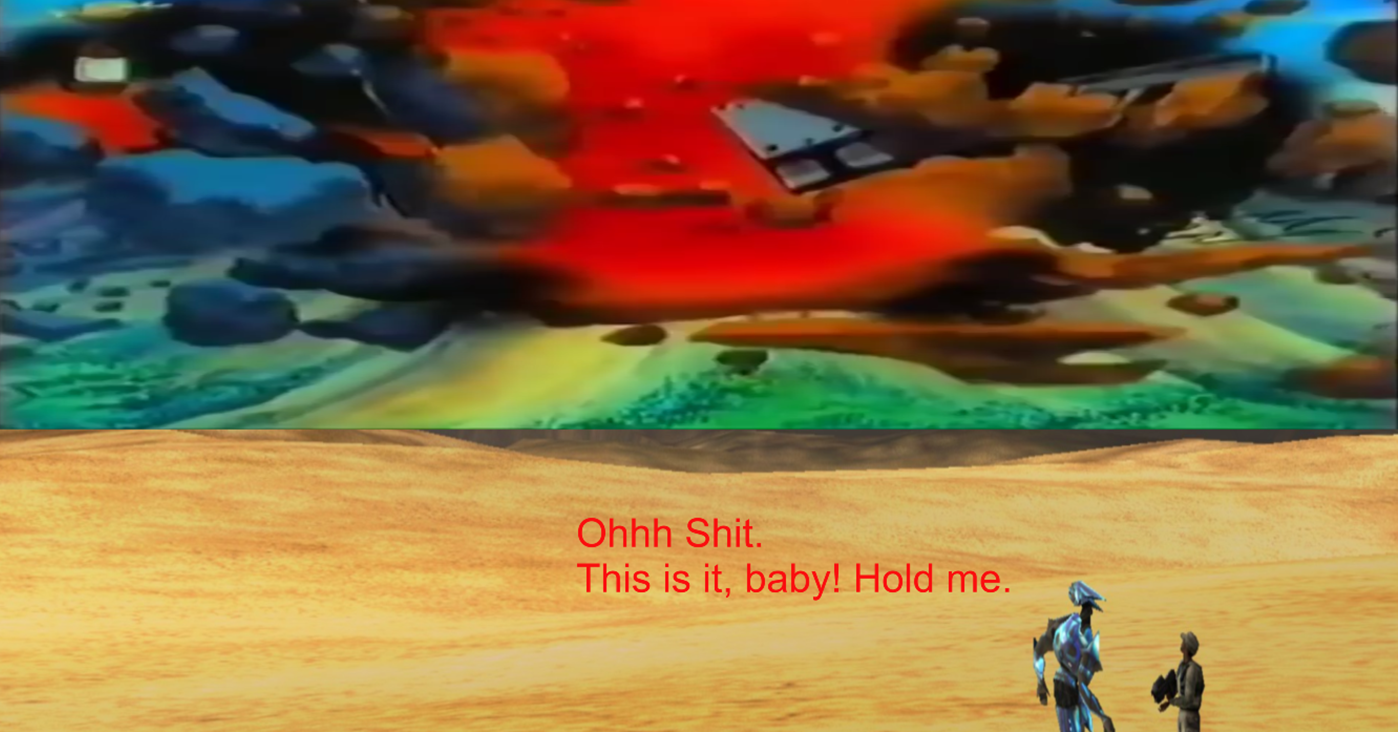 Technically a remastered version of the same idea: I initially tried to include the smoke cloud in the shape of Cyril's head above the fireball as well, but the result looked like garbage. I'd been saving this especially for the Legendary ending I included screenshots of in the Halo SPV3 ToD. (Stage 10B)

It's based on this scene in question: https://www.youtube.com/watch?v=mwQAHYyPmvI&feature=youtu.be&t=2511

I hope the guys who do The Raccoons Abridged use both my photoshops as a basis for including the actual video and music photoshopped into the movie itself (respective scenes) when they cover The Lost Star. 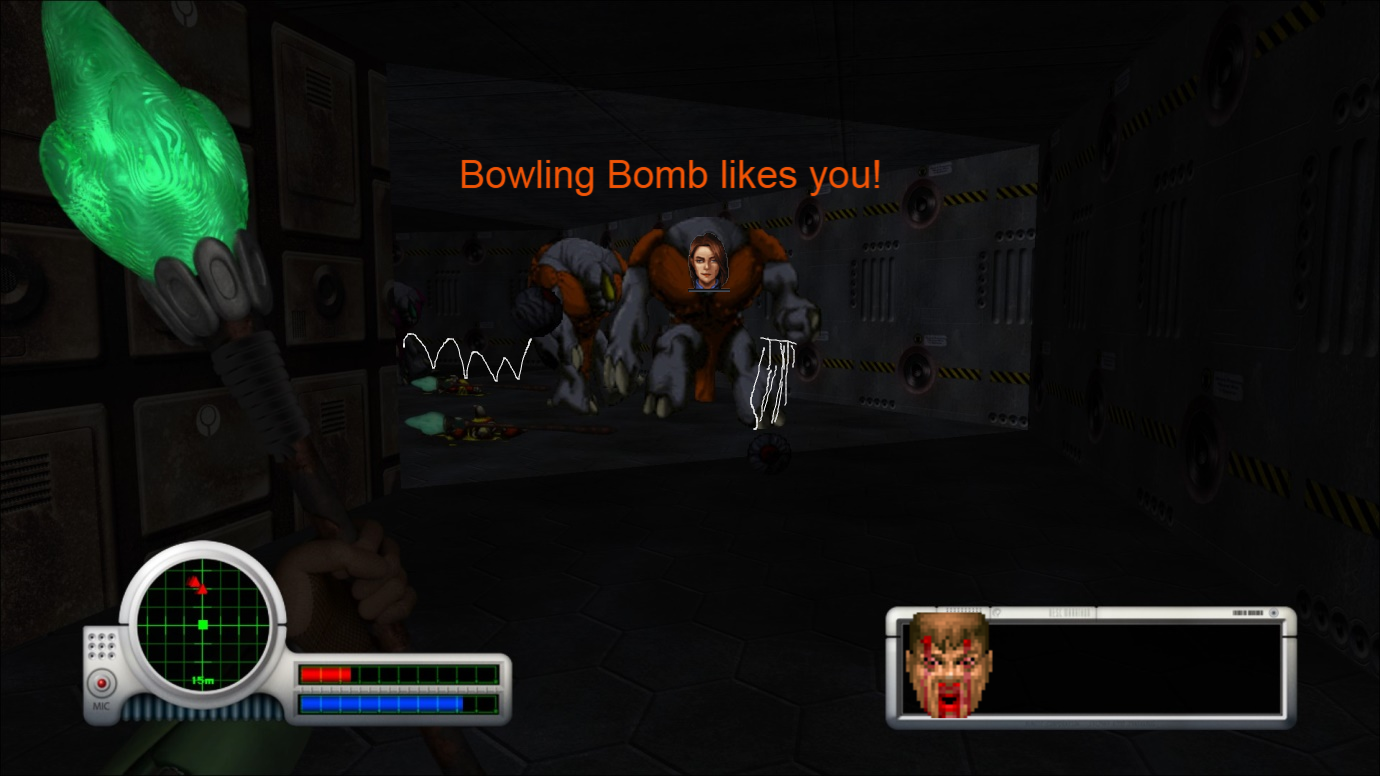 I came up with this idea on the spot when I was playing the latest build of Redux. It's a reference to the game Ion Maiden on the Build engine, though honestly I should have used one of the Stalker tanks in Marathon 2 instead of the hulks, especially considering the M2 Stalkers got a shout-out cameo in Ion Maiden/Fury itself. I guess VoidPoint are fans too: 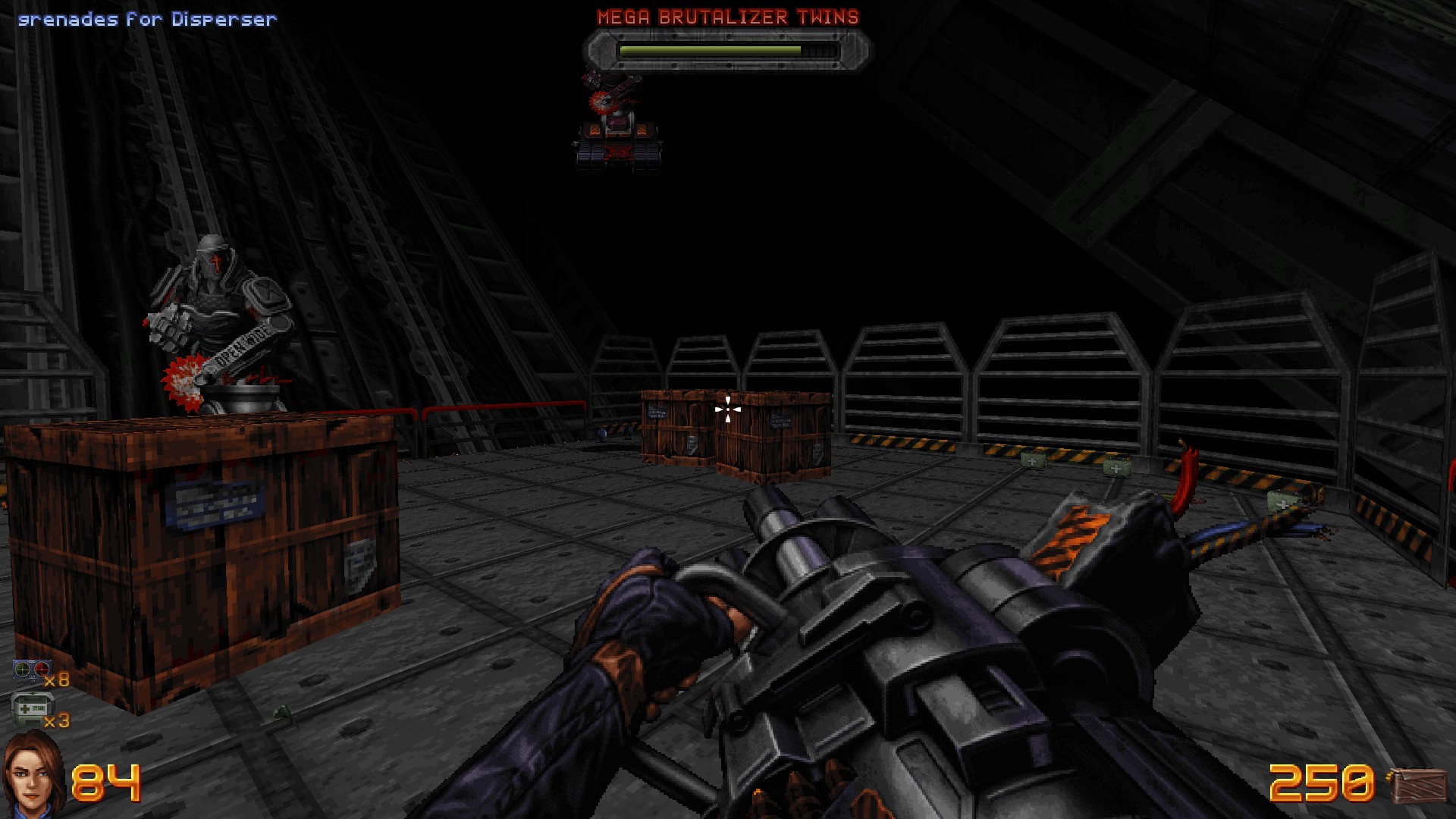 They appear elsewhere throughout the game, those are just the boss versions. The inclinator you fight them on is a Sonic Adventure 2 Dreamcast reference. 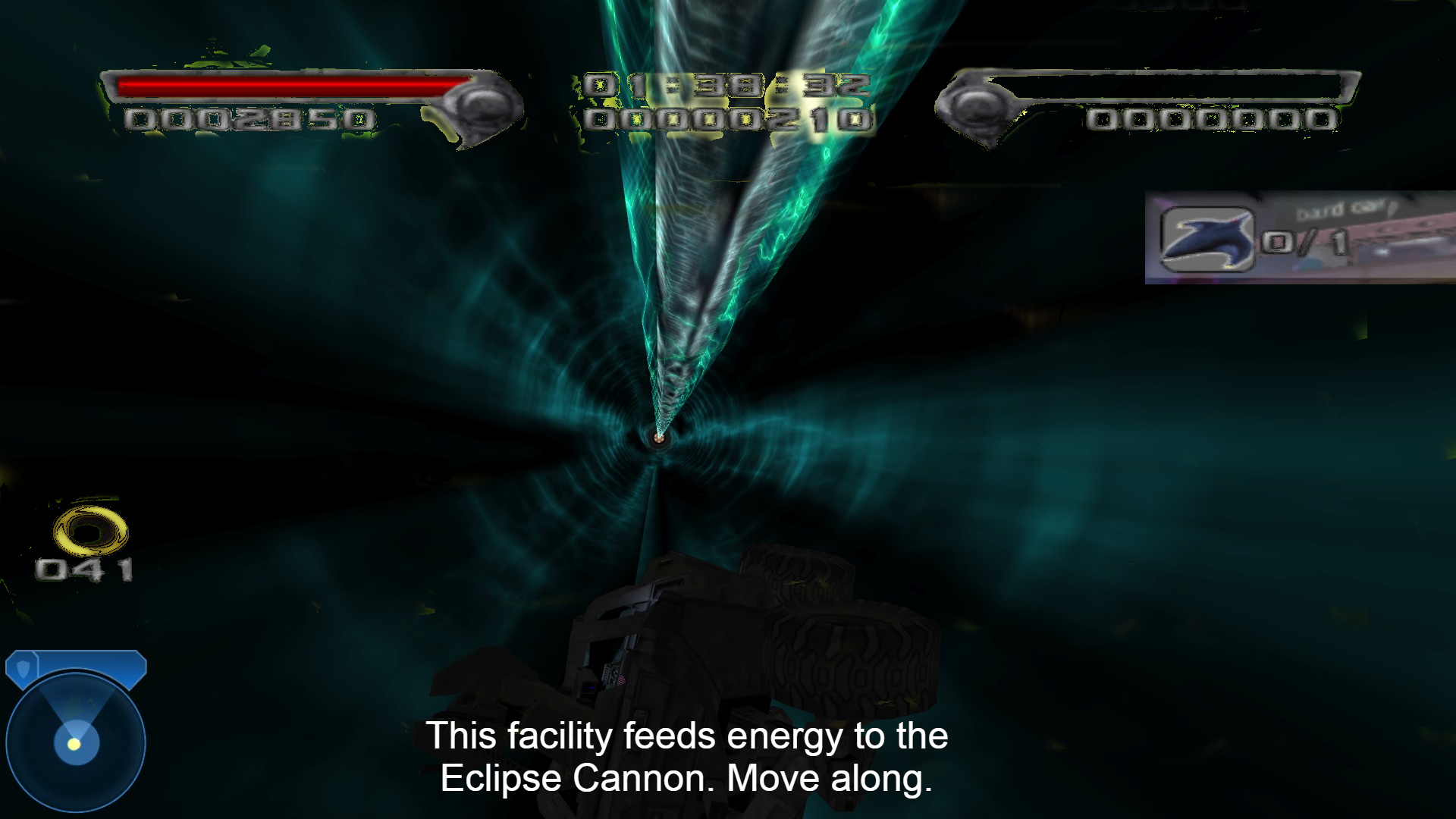 The Final Rush to the Forerunner keyship on High Charity. The comparison to The ARK was just too good to pass up when I saw the restored Halo 2 Warthog Run in action. There's some minor artifacts from my original Shadow screenshot I couldn't get rid of without damaging the bits that were meant to stay. 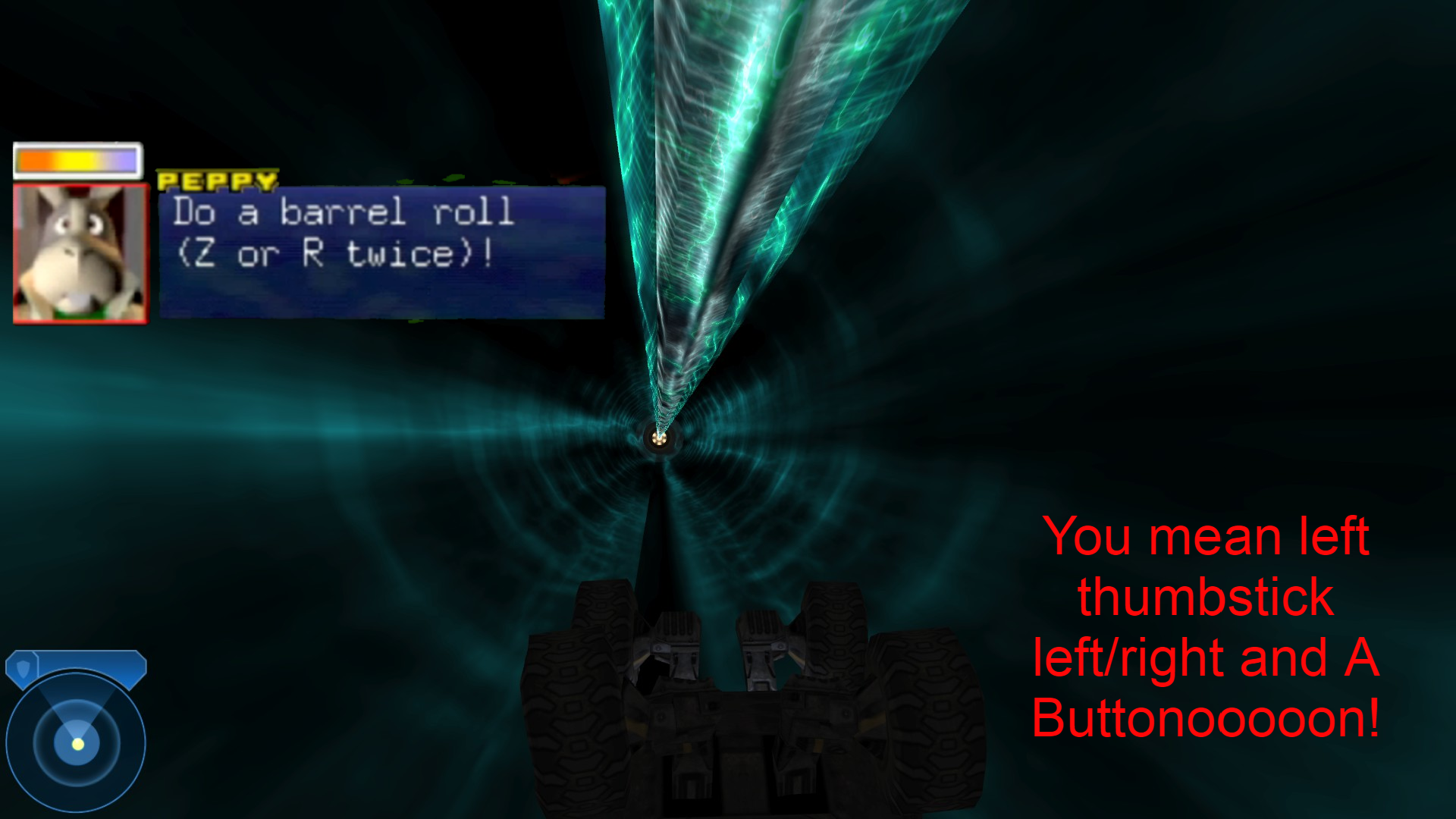 This happened immediately after the screenshot I used for the Shadow reference. I figured this one was either Star Fox or the tank scene in The A Team movie. 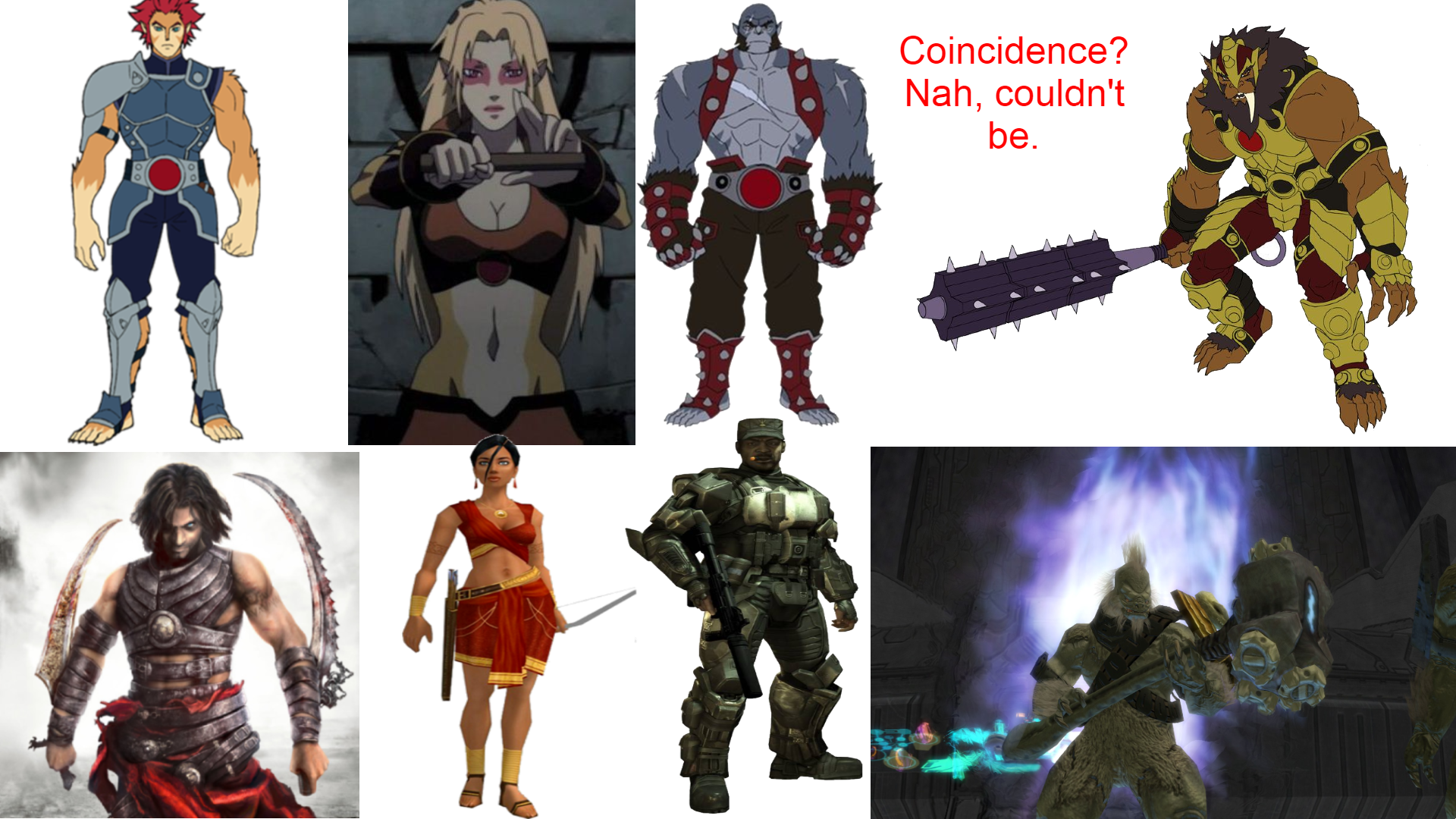 OK, maybe Johnson is a bit of stretch, but you got to admit those two at least sound almost alike. Don’t think you can slip those subtle similarities past me, 4C. I approve. 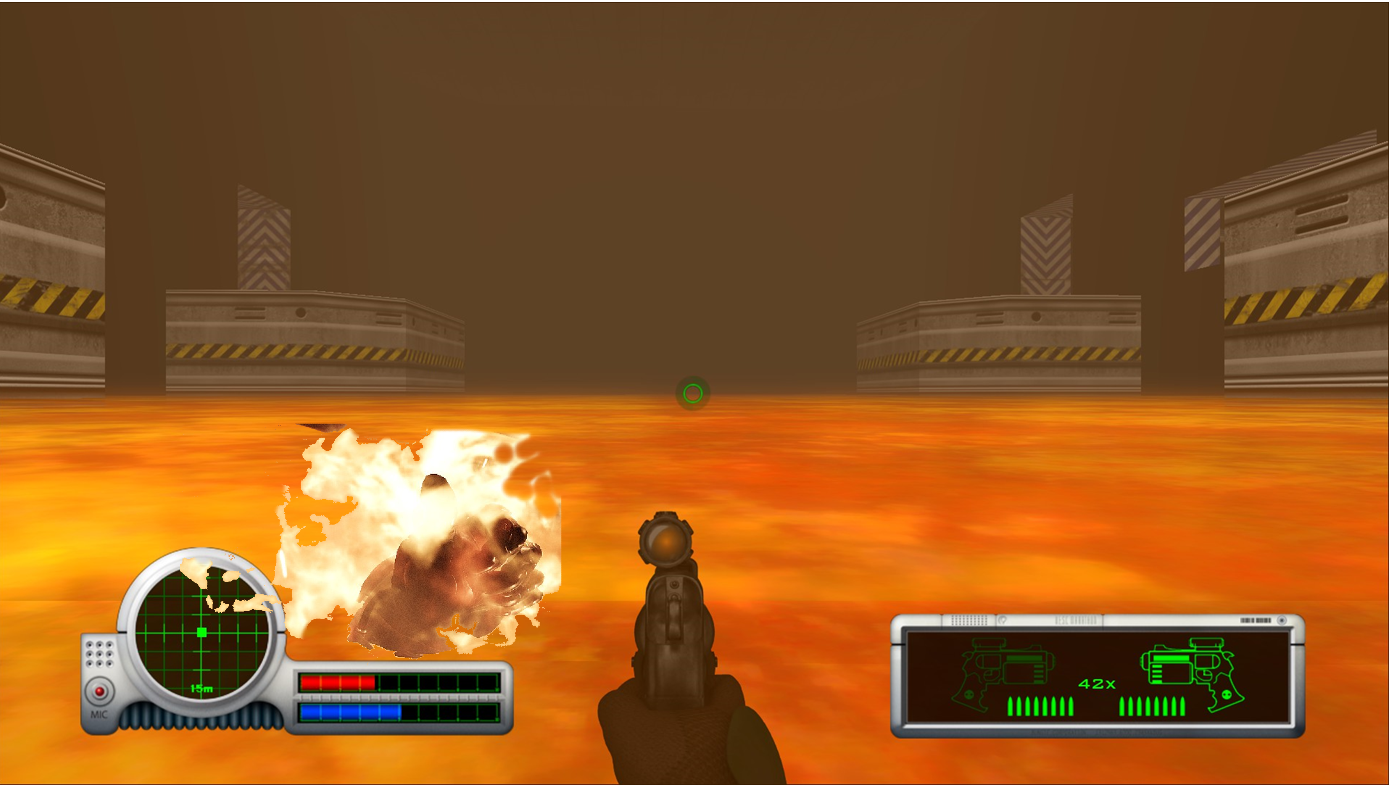 This one I made during my playthrough of the latest Redux build both to show my appreciation for the map in question (FIREX5) as well as my appreciation of the mod as a whole. It's based on a similar one I did when I tried Resurrection on the Unreal engine years ago, only I did a better job with this one, especially the flames on Marcus's hand. 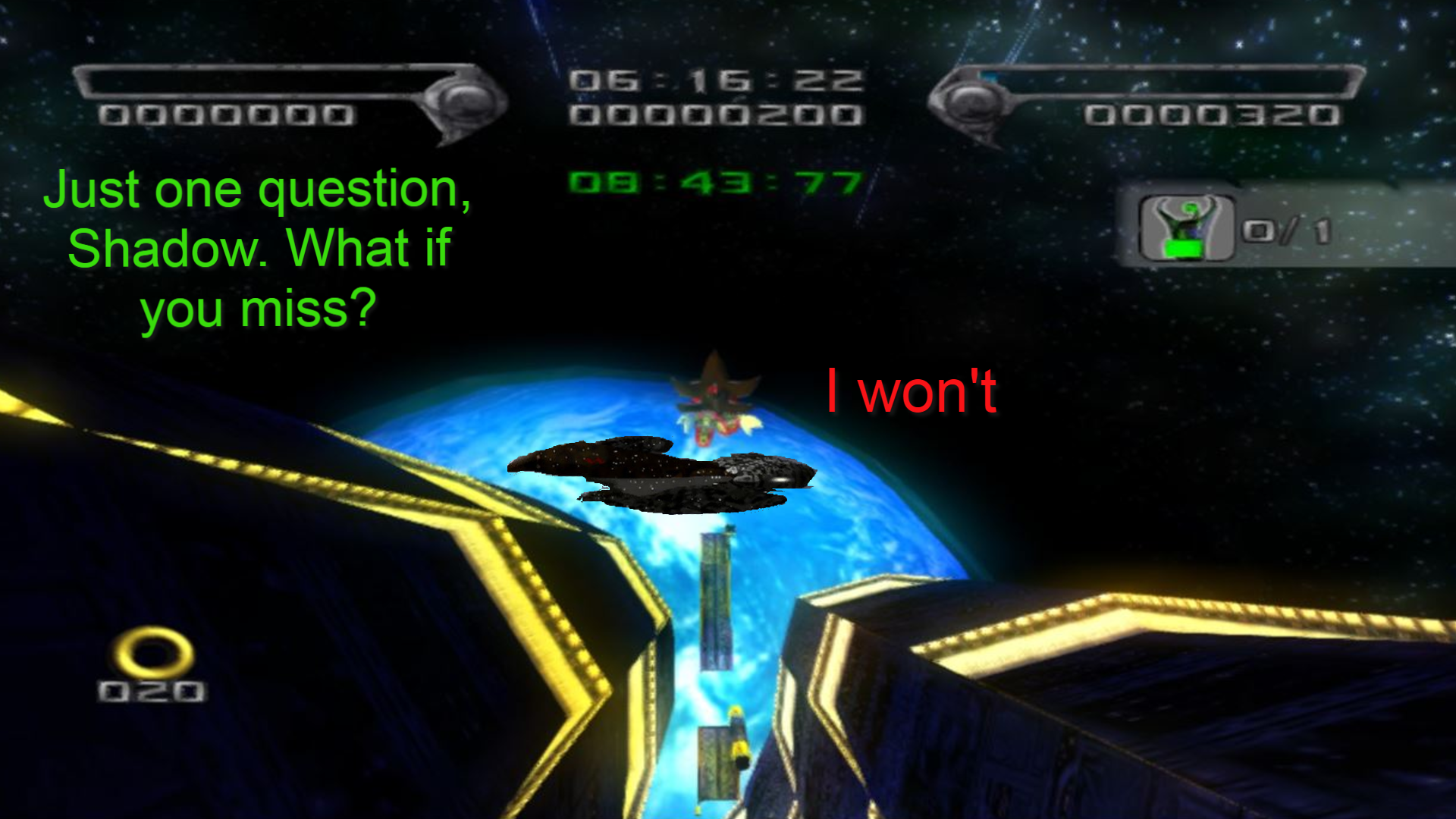 One of the best parts of Cosmic Fall, by far: Giving the Black Arms back their bomb. I even did a version of this with the games swapped around and with more appropriate text to match. 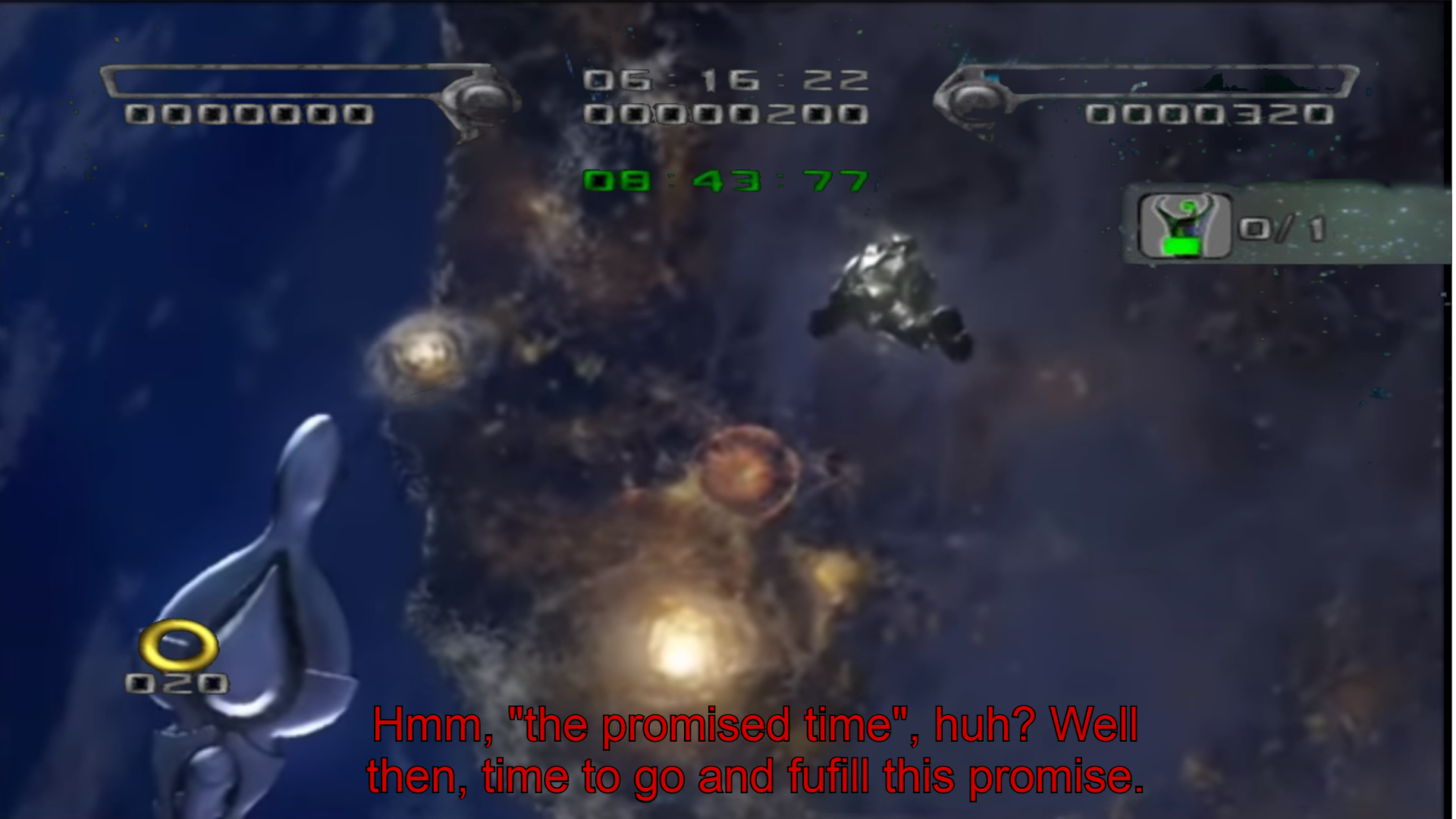 Looks like the Covenant really mean business. Let's show them a thing or two! 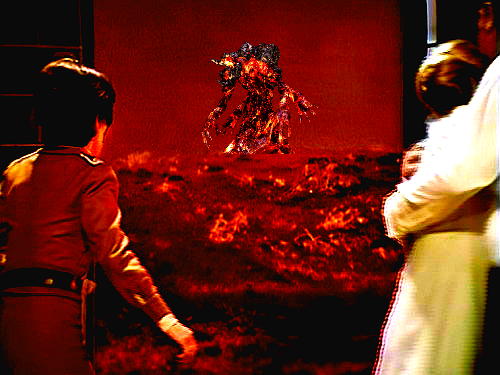 The courage of our God, given form as an alternate personality tears heretics a new one for the (indirect?) manslaughter of his vessel and good friend. The Marathon link comes as this is the image I wanted to add to the Hathor terminal in The Ensurance Trap (the broken one I fixed in the 1.2 rain map), but despite my best efforts, I could not get the map, scenario file and edited terminal script to make friends. (I posted a photoshop of what I wanted it to look like a while ago) It's made from the climax of Doctor Who: Inferno, which is one of my favourite episodes starring one of my two favourite Doctors (the other is William Hartnell). 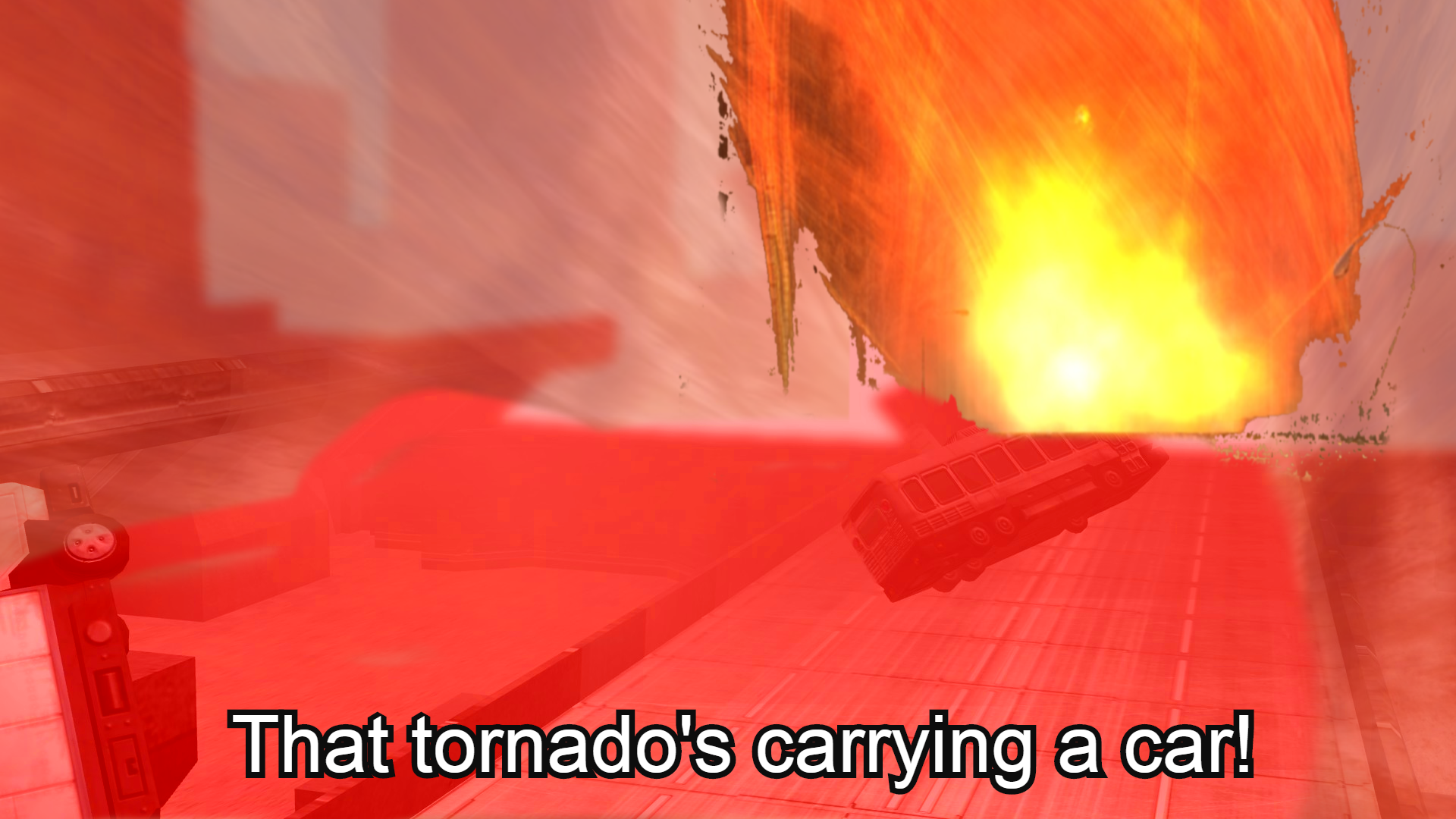 And Lord Iblis Sayeth: "Your world shall burn until it's surface is but glass!"
Hope you stockpiled asbestos speedos.

And last but not least, the one I'm MOST proud of:

The Coming of God 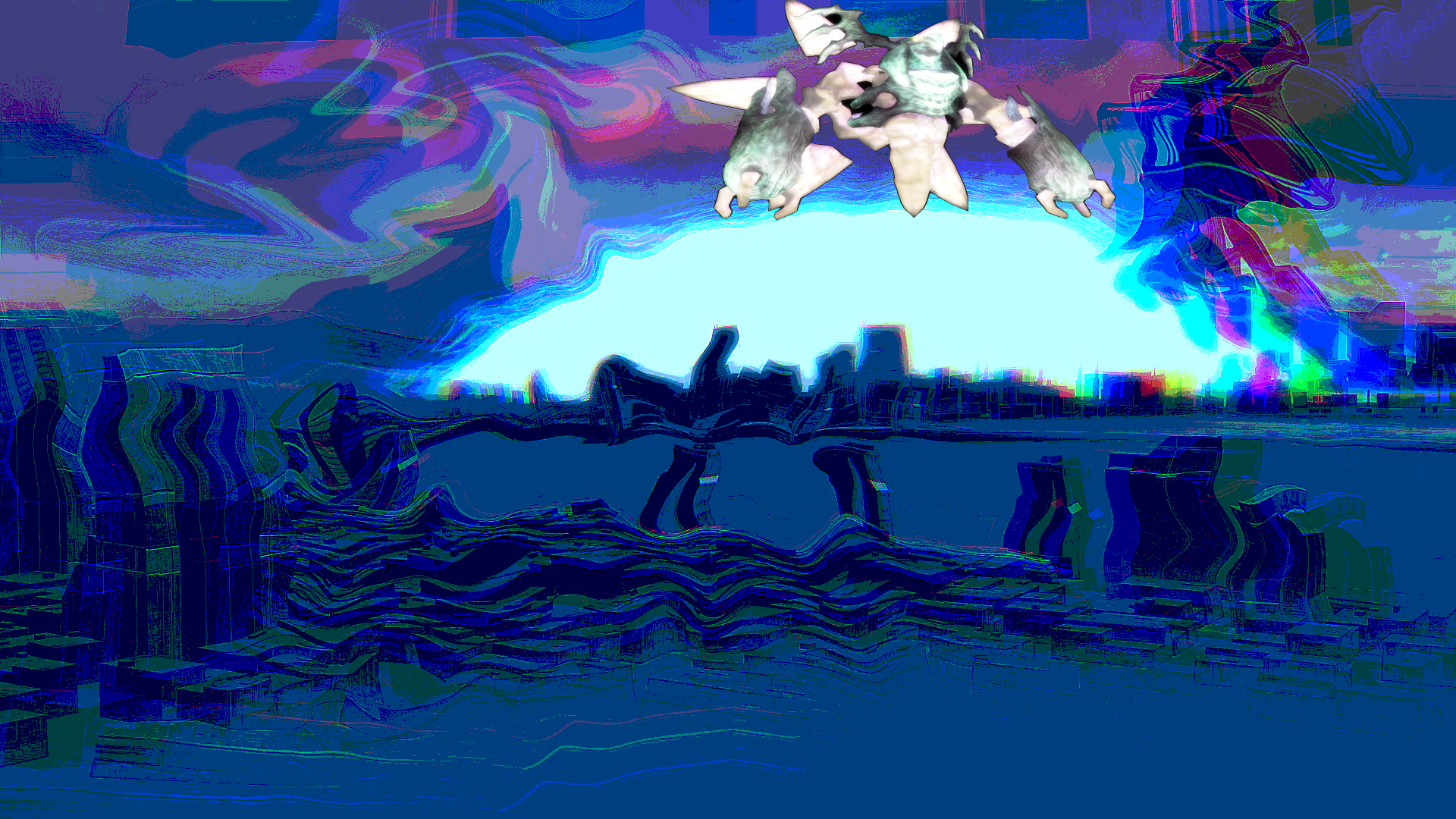 And the One True God Sayeth: I LIVE, AGAIN! I AM THE FLAME OF HOPE THAT LIGHTS THE WAY. I AM THE BRINGER OF JOYOUS IMMORTALITY AND SALVATION TO THE ENLIGHTENED AND ENTROPIC DAMNATION TO THE INFIDELS. MY BEING SHALL CONSUME ALL DOOMED UNIVERSES & TIMELINES WHILE THE REST ASCEND TO PARADISE, AND SHALL BE CEASELESS. NOW, HALO ARRAY! RAISE THE CURTAIN FOR OUR FINAL SHOW!