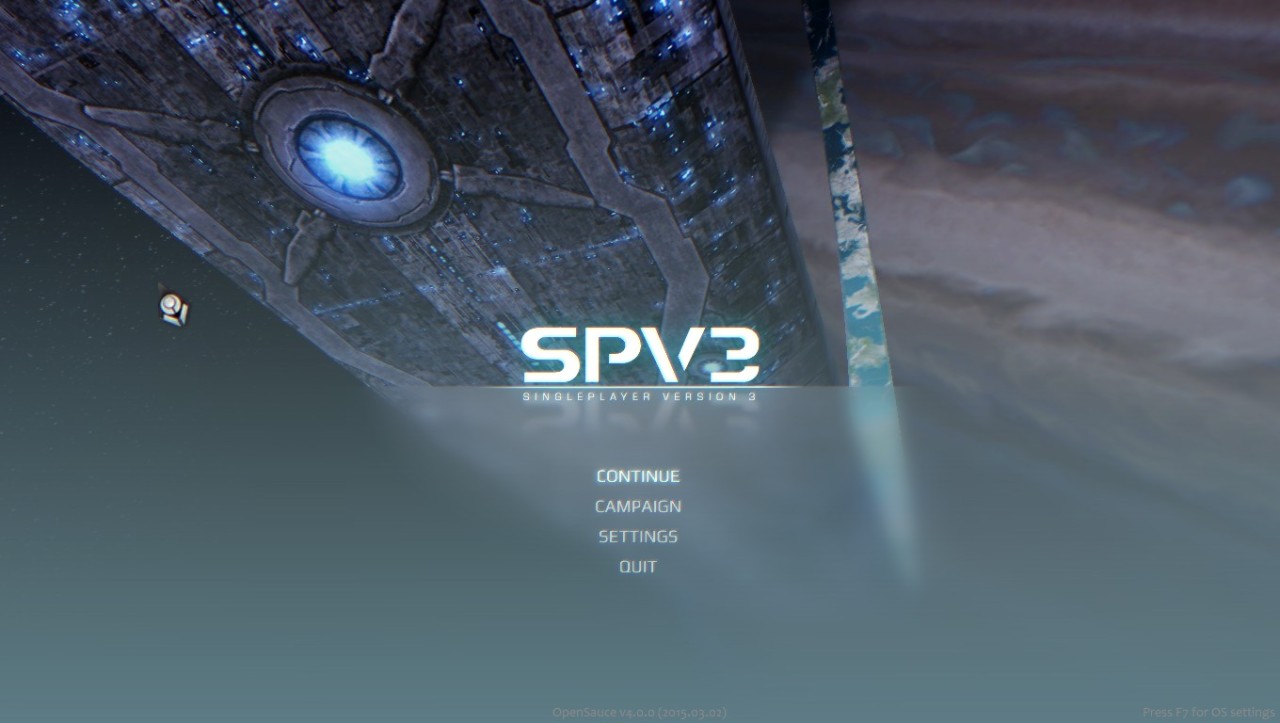 Special Stage 1: None Left Behind

Help with the evacuation of Alpha Base, and lead the marines to the Pillar of Autumn

Last time on Halo SPV3 Tour of Duty, we tried to save Captain Keyes and failed: he’d become part of a Flood Proto Gravemind. We did however, get the self-destruct codes for the Pillar of Autumn that we need to put the fusion reactors into nova. Well, I say “nova” but it’s more an explosive release of the pent-up plasma, done in such a way as to destroy the ship and the ring. My knowledge of nuclear science is as limited as Bungie’s is. However, unlike the vanilla game and Anniversary, we now have not one, but 2 new levels before the last stage that weren’t in SPV3.1.

I take a detour from returning to the Autumn, instead returning to the large butte that the forerunner beacon structures and Alpha Base are on. If we are going to destroy this ring, we need to evacuate the lair. 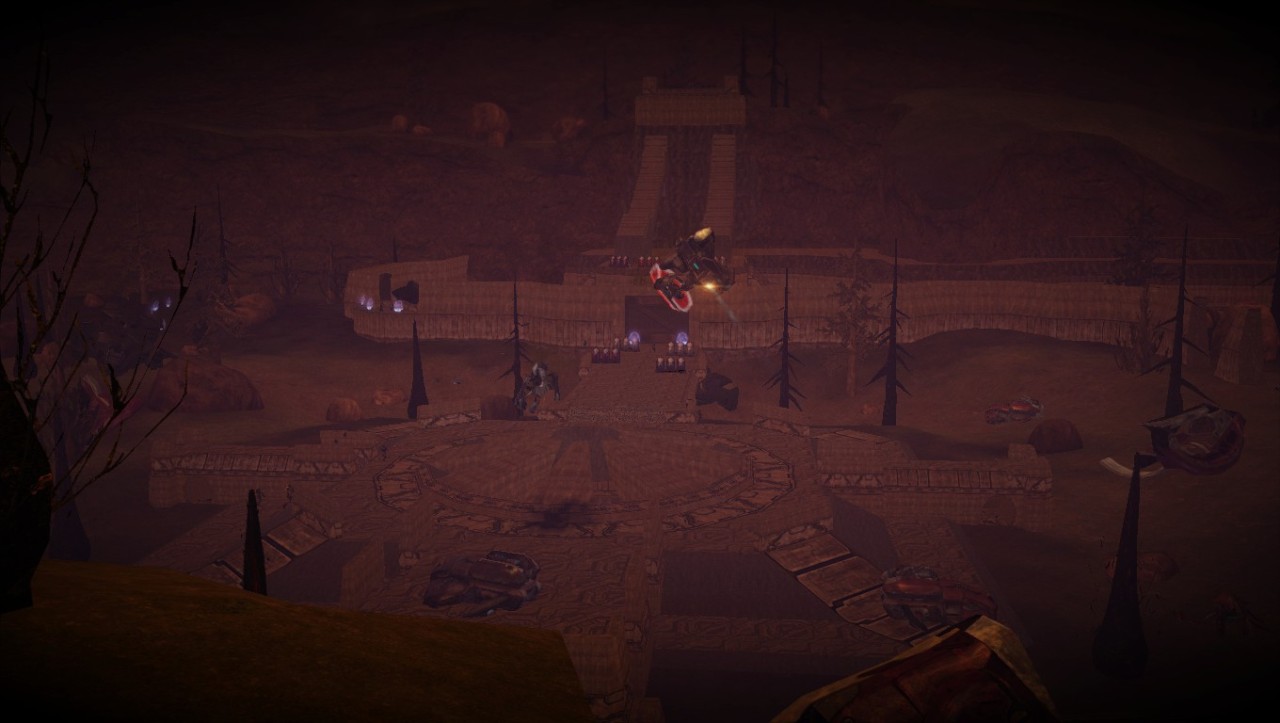 This isn’t good. Alpha Base is already under attack by sentinels and I can only guess that the Flood have broken through the barricade under the grating inside the base which was set during the last level by the ODSTs here. “Everyone fall back!” Sgt Johnson barks through the comm, interlaced with static. “…Negative! Fire’s too heavy…Chief, can you hear m…half a klick, upriver from your position.”

“The signal’s bouncing in and out, I can’t clean it up.“Cortana says, using a Halo 4 line, complete with her Rampancy static from that game (a given since it’s directly ripped audio) 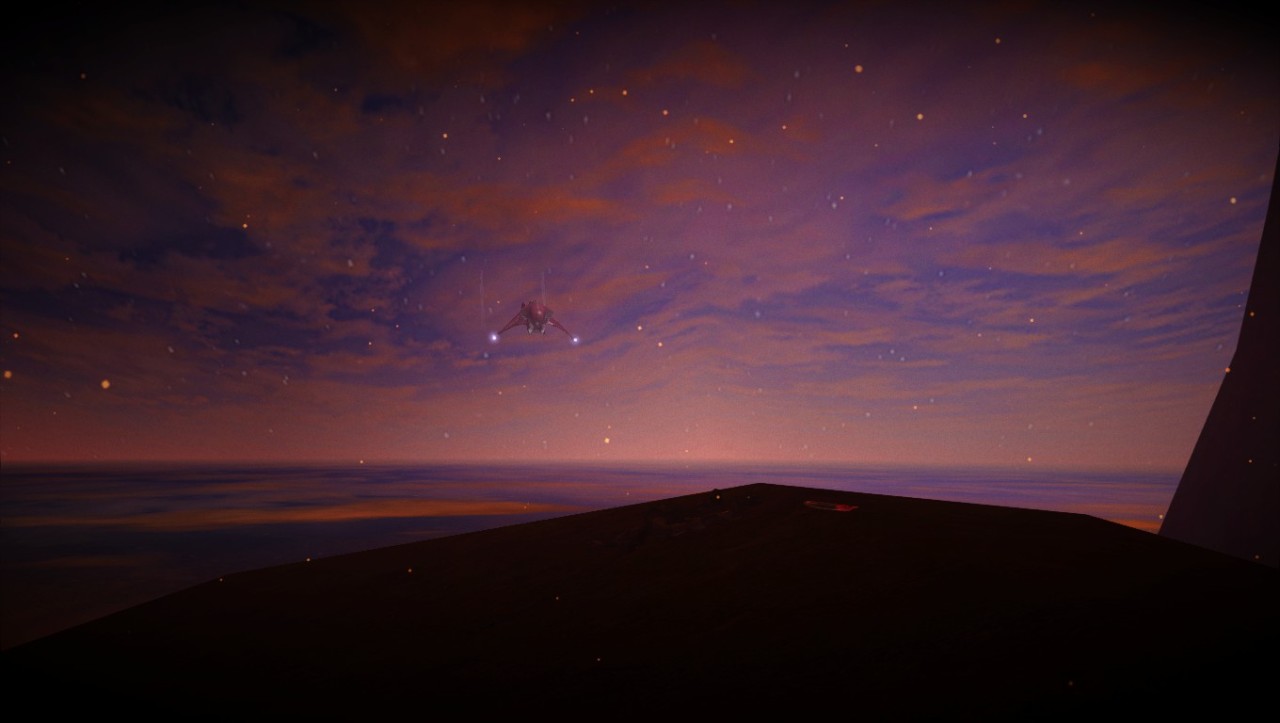 What’s with all those sparks? Or are they Flood spores? 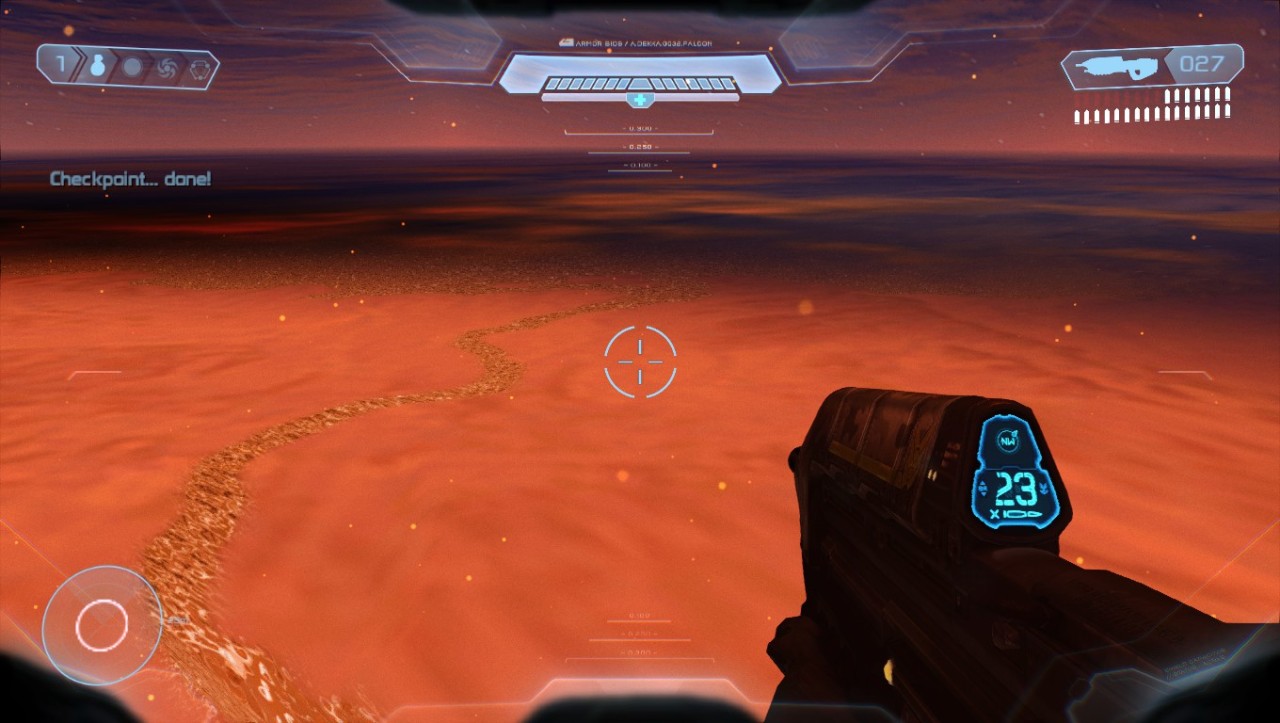 I don’t think that’s fire: the Flood have spread throughout the ring, turning whole continents into giant hives with anthill like “spore mountains”. Spore mountains act like volcanoes or geysers, spraying those spores in the air as far as they can, like the Seeds of Death from Doctor Who. “We need to move!” Cortana urges, and so I do. I find myself at the waterfall to the “north” of the cliff edge beacon complex. The burn seems to run red with blood, though it could just be Flood biomass. Grunts, skirmishers and jackals with assault rifles attack as I navigate the dark mountain pass around wrecked wraiths. I come to the clearing near the lifepod, where a large shield and one of those radio tower things are set up. The first terminal is by the lifepod. Sheila Polaski from the books and Stage 2 radios us for help. I’m afraid I’m flying blind here for the Special Stages, guys. I’m just as in the dark as you. 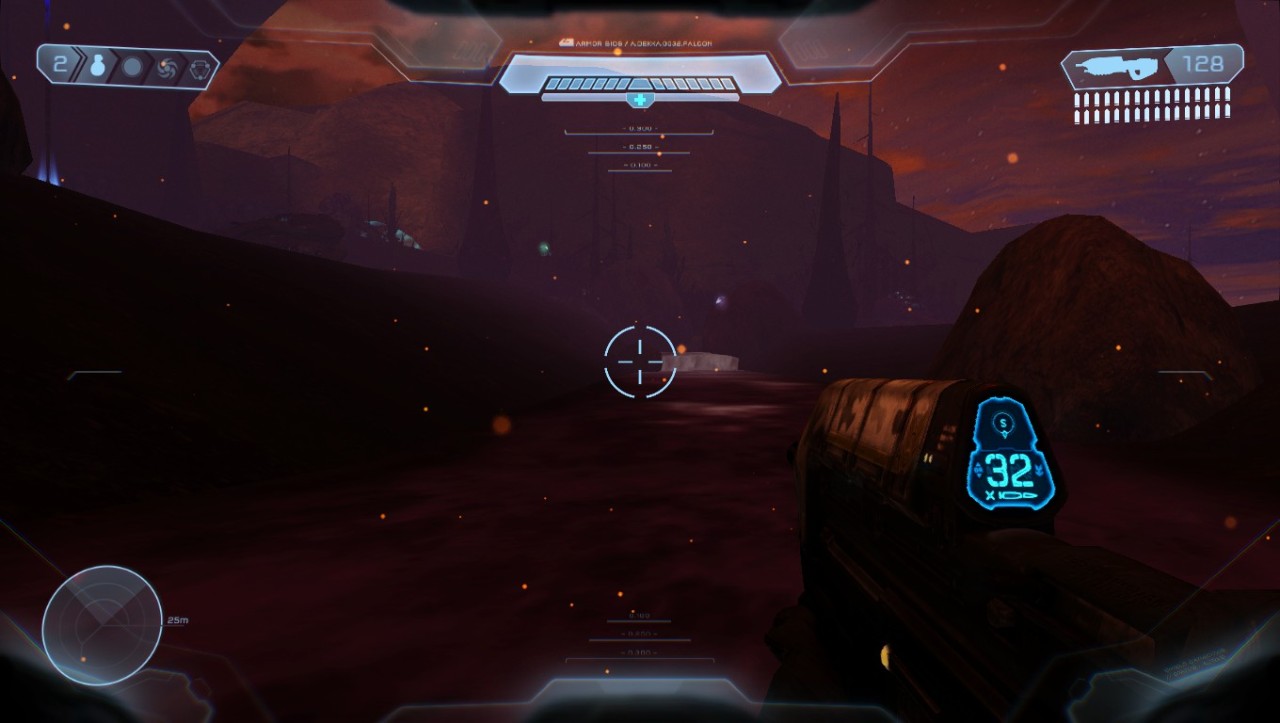 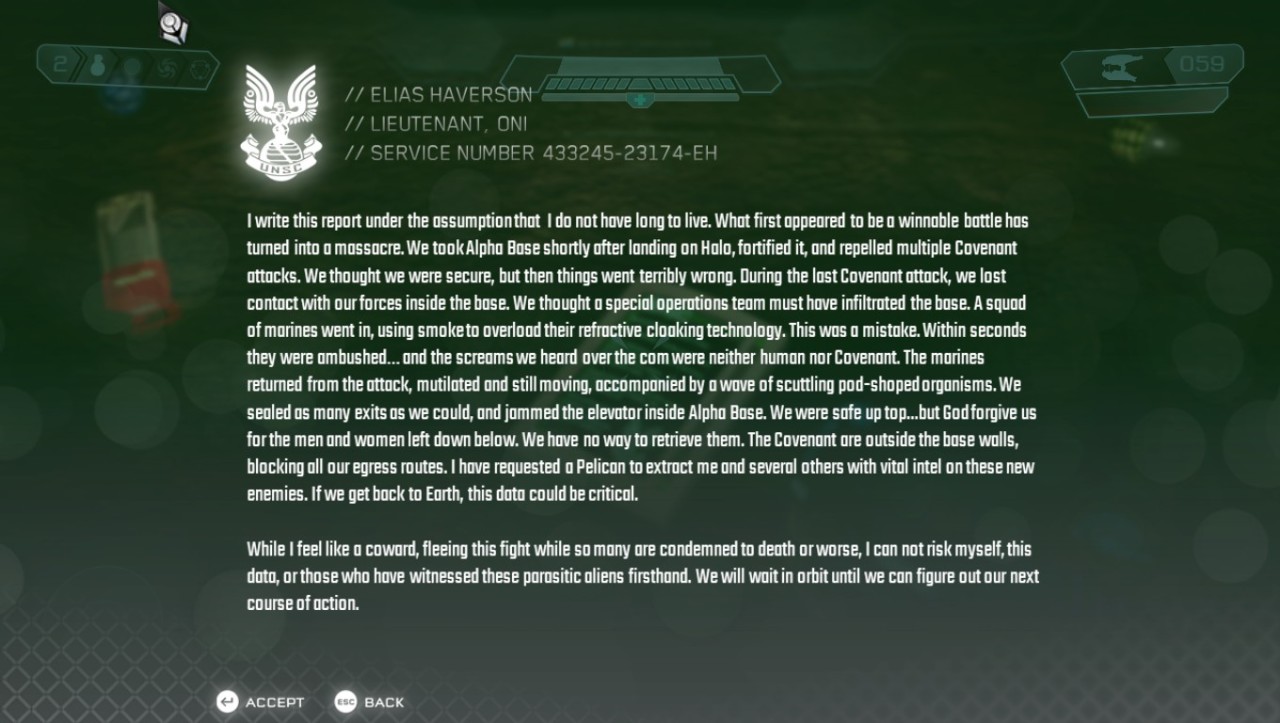 The Flood ambush me as I arrive at the lifepod before I read this terminal and they keep on coming. I wonder if the Flood spores in the air are reviving them like infection forms do in later games. At least I know Spark was right about me helmet filters, especially as the spore fog first appeared in Halo 2. A charging column is on the hill next to a shade, by the large shield and bend in the burn. Unlike Two Betrayals in this version of the mod, this one does work. 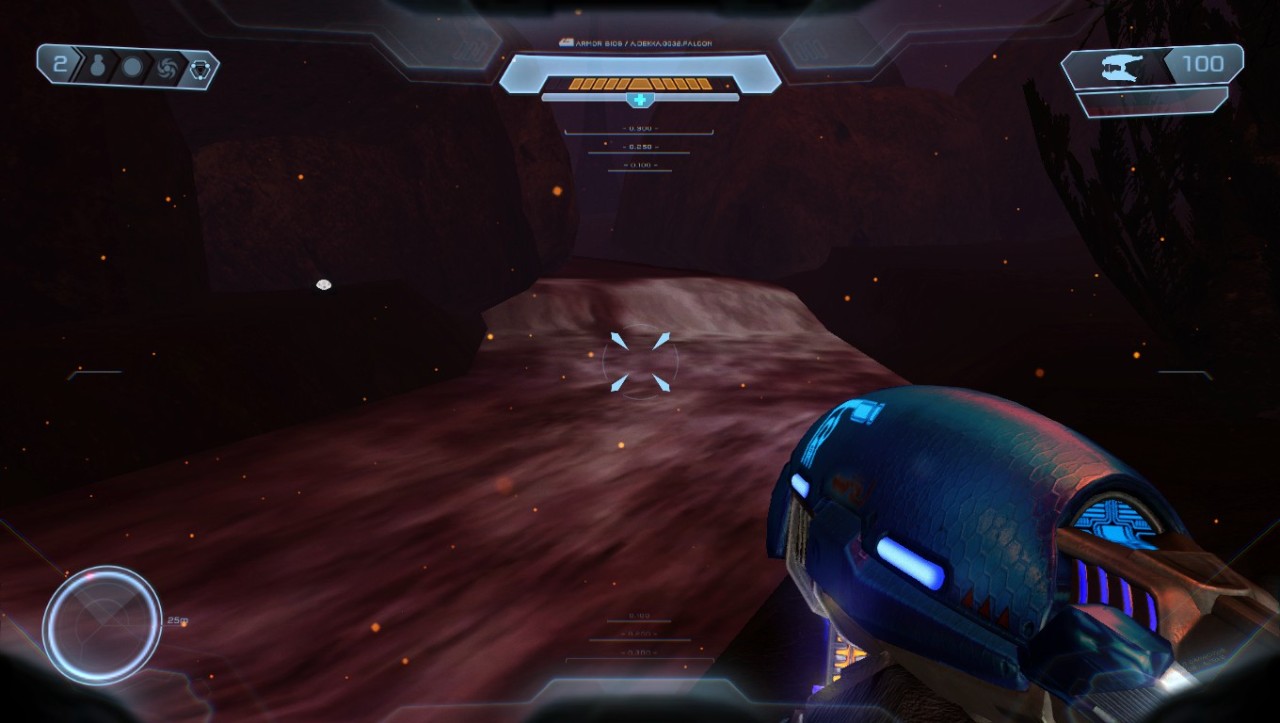 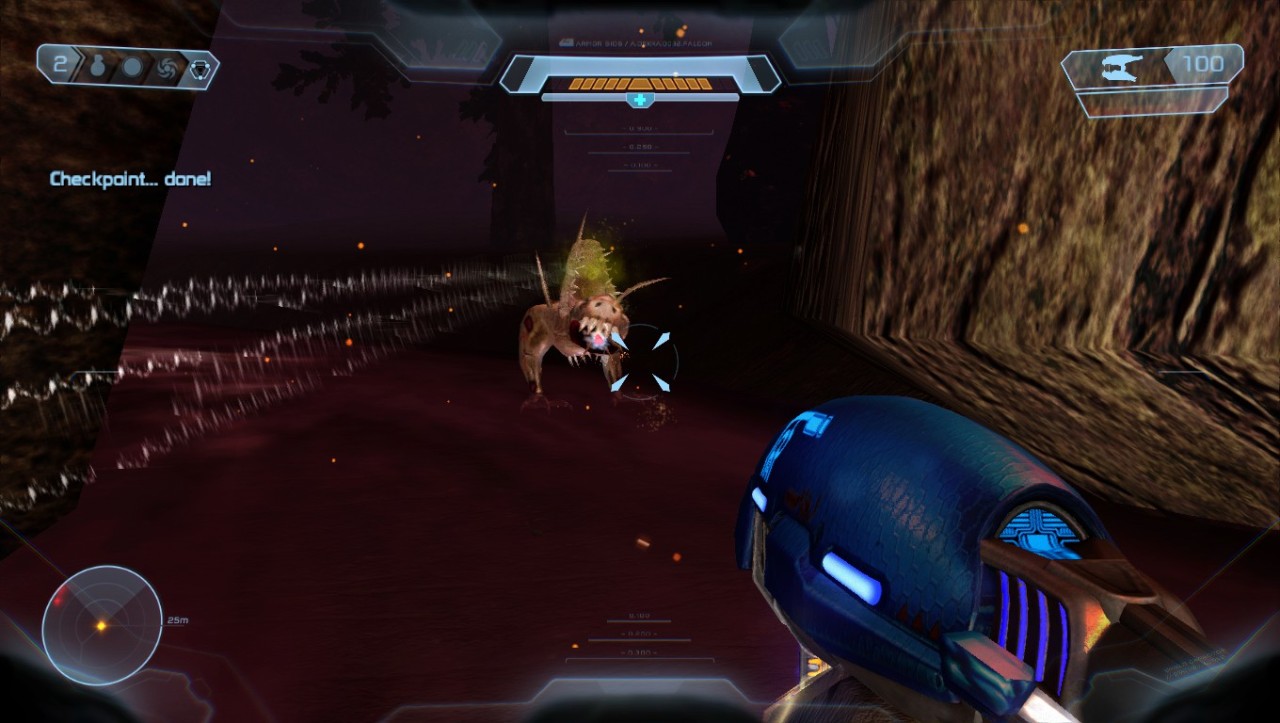 RANGED PURE FORMS FROM HALO 3?! I thought Pure Forms could only exist when there’s a full Gravemind! Reggie Fils-Aime from that one meme everybody knows but can’t place where it’s from puts it best:

I freaking hate those guys, especially on Legendary. They shoot green brute spiker like nematocysts from that penis shaped part on their upper bodies, they can cling to any surface especially ceilings and they roll up like a pillbug when shot, acting as armour. Polaski warns that the covenant have put those shields in the tunnels to Alpha base, but Cortana says she thinks she can forge an override, telling me to head through the cliffs.

More Ranged forms and a brute combat form with an RPG wait further up the burn and there’s an Anti-Air Wraith, savage jackals with sniper rifles, some shades, skirmishers and shielded brutes by the waterfall at the head of the river, by the beacon complex. The rocket launcher I took deals with the tank plus I use a carbine for the snipers.

The cliff edge beacon is blocked by a rockslide but this one is still open. “Look on the bright side,” Cortana says about the covies and Flood using a Halo 2 line. “For now, they seem more interested in killing each other.” Sure enough, they are duking it out on the beacon complex. 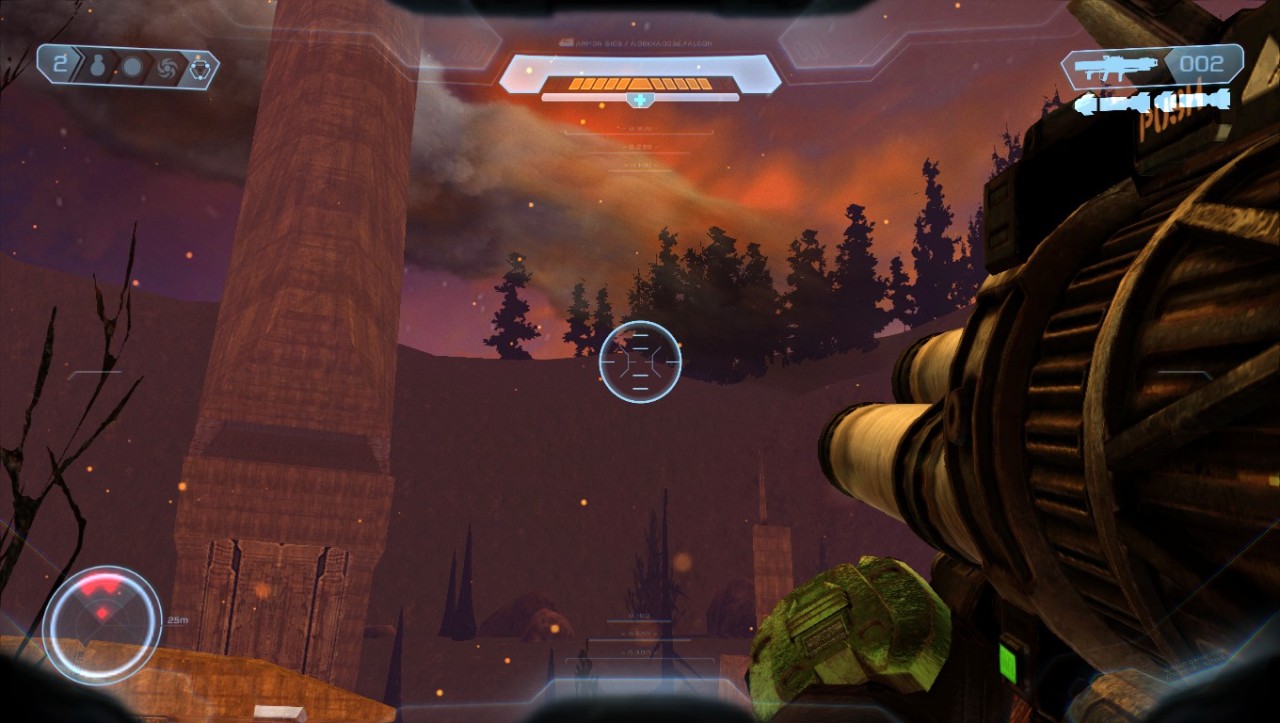 I don’t think that’s a fire. The spore cloud sure looks like smoke though. It takes all the rest of my rockets and a lot of wasteful fast-firing the carbine to make it onto the complex roof where the first forerunner terminal is. 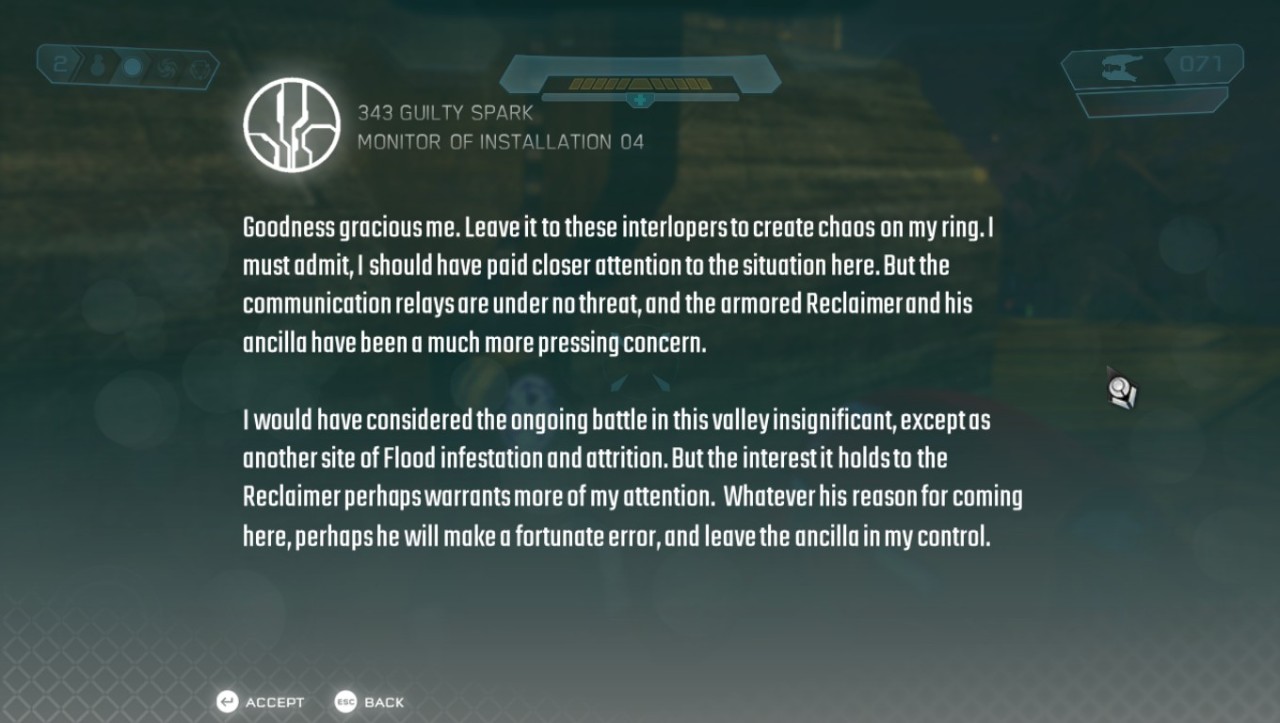 Don’t count on it. I bet the marines are indeed attacking the sentinels right back. Hopefully Cortana warned them not to trust the Monitor and shoot him on sight, maybe even tell him they know what he intends and is foolish for doing so. Inside the tunnel bunker, I find an assault rifle with a grenade launcher and I take it. Most of the Alice Pines and more traditional fir trees are burned bare thanks to sentinel attacks as they battle the Flood.

Back at the creek, an unmanned normal wraith allows me to deal with the Covenant in the rockslide area where the shield controls are. This takes several attempts. The next terminal is on top of the second of the 2 flat topped boulders. Also, it turns out it wasn’t dawn I saw at the exit of the last stage, but reflections of the fires and spores here. 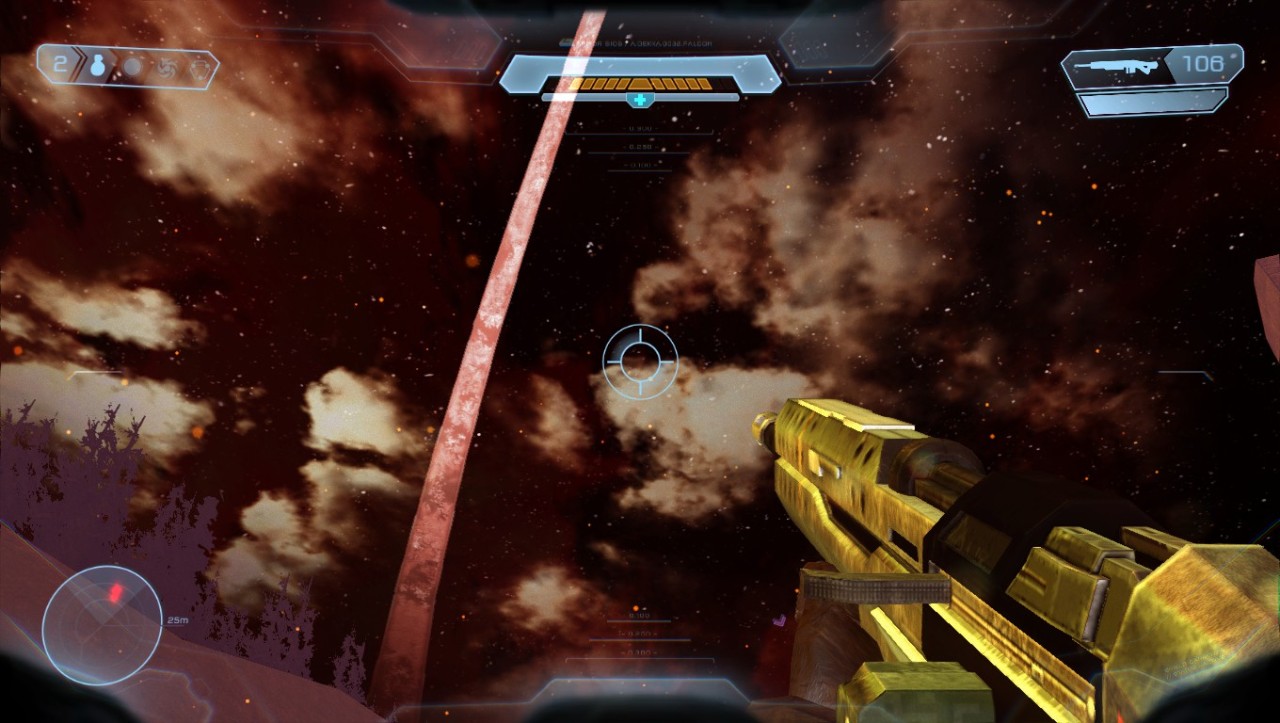 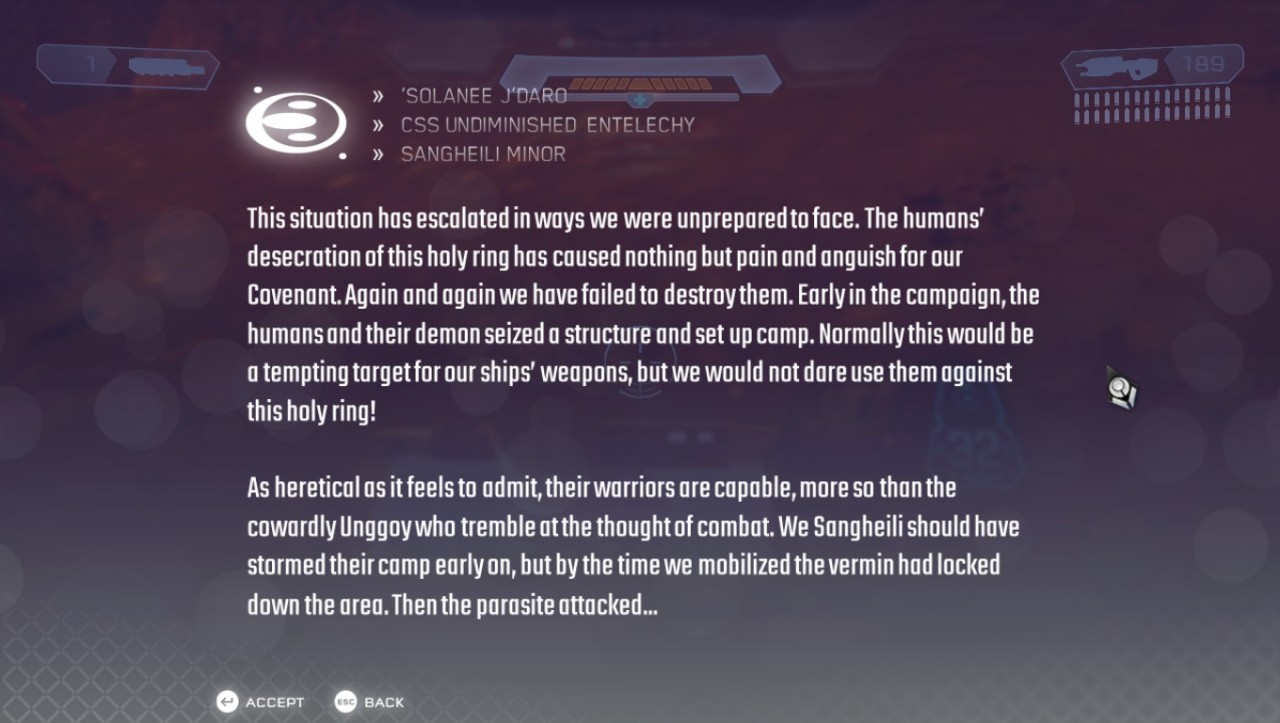 The first boulder has a radio tower that acts as the controls for the shields. I take my wraith through the shielded passage and it comes out by the charging column. Rocket Flood and an enforcer attack here. I kill them and then charge up my brute plasma rifle. I then hijack 2 wraiths including an AA wraith before returning through the tunnel to Alpha Base. Polaski says I need to save the marines after finding some way to scale the motte, where they’re trapped, or so I thought as they appear to actually be in the bailey, having gotten stuck trying to open the main gate.

Johnson is among the marines and the door into the bailey is jammed. After destroying the enforcers we saw earlier, I climb onto a big rock over the wall. There’s waves of Flood in here and I need to protect the marines. Kill every infection form you find so they don’t infect the marines. Eventually, Cortana will open the gate over the dry moat bridge. The next two terminals are in the bailey, one in the bailey house lobby and one under the bridge. 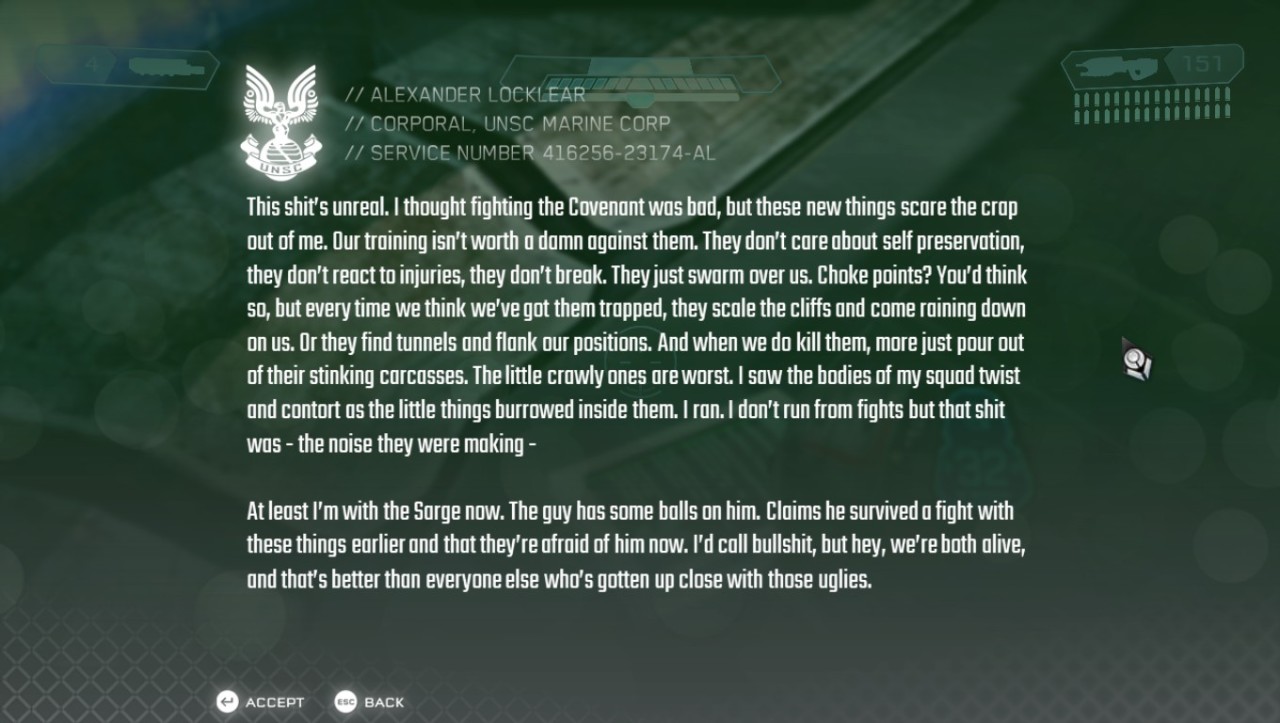 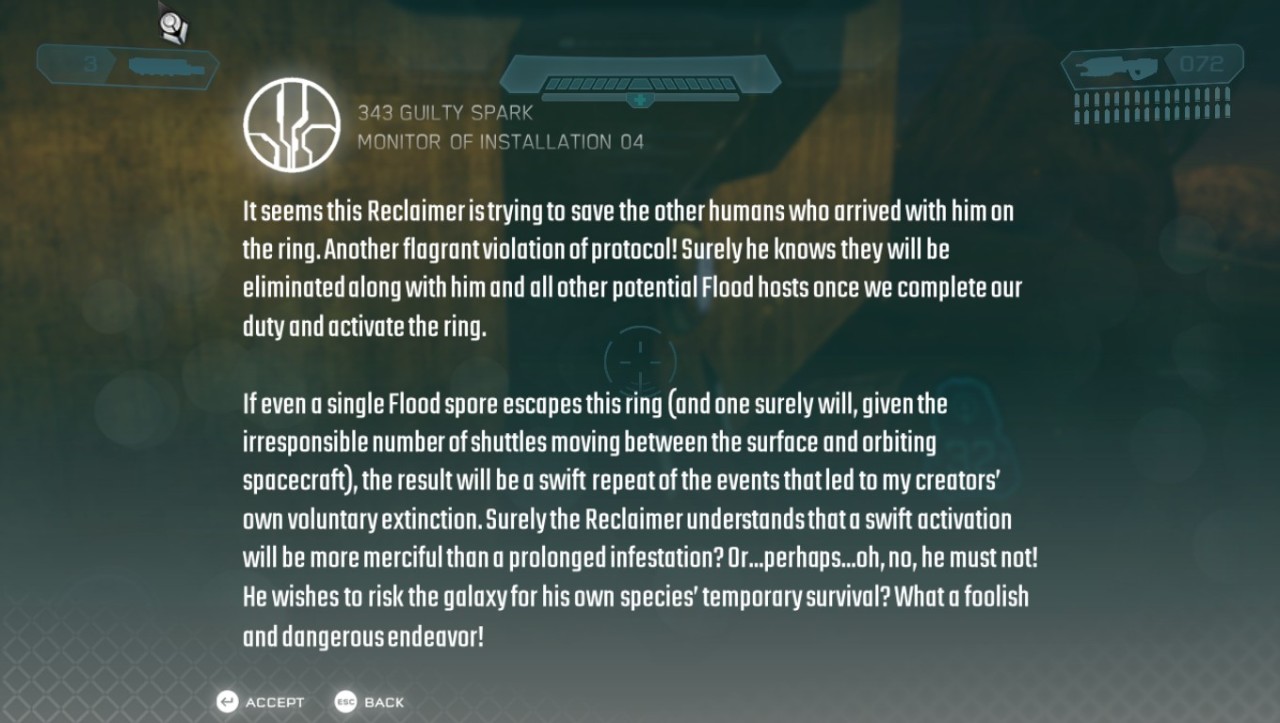 I ain’t risking the galaxy when I escape. He doesn’t have a clue yet, does he? Polaski tells us to flee back through the tunnels to where I landed in order to avoid aerial attacks. There’s a pelican waiting there to take me away from here and hopefully take me to the autumn. The rest will capture the Truth and Reconciliation, clean it of the Flood, use engineers to make repairs and use that to escape.

The marines all get slaughtered (except Johnson and a few others of course which I find out post-game) as I make it past the beacon pit, forcing me to charge up the rim of the butte’s plateau to the tunnel alone, past tons of pelican spirit and phantom wreckage. More enforcers and Flood ranged forms show up to complicate matters. A grizzly waits behind the jammed door. As I drive slowly down the tunnel to the marsh grotto, Cortana mournfully says “Chief, I’m so sorry.”

Act 2: Don’t Make a Promise if You Know you can’t Keep it – Death Ruins 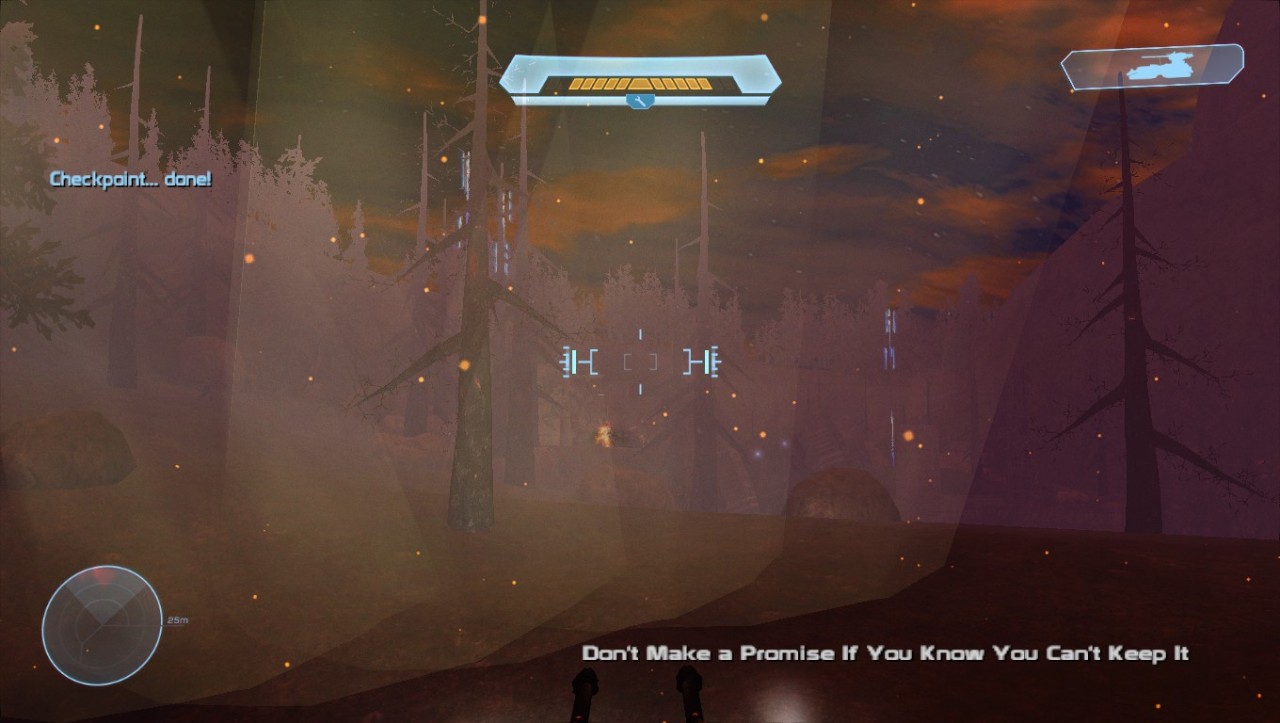 The Flood are fighting both Covenant and enforcers in the marsh but the tank’s cannons make easy pickings of them all. The next terminal is on top of the second of the bunkers that the marines were held in. 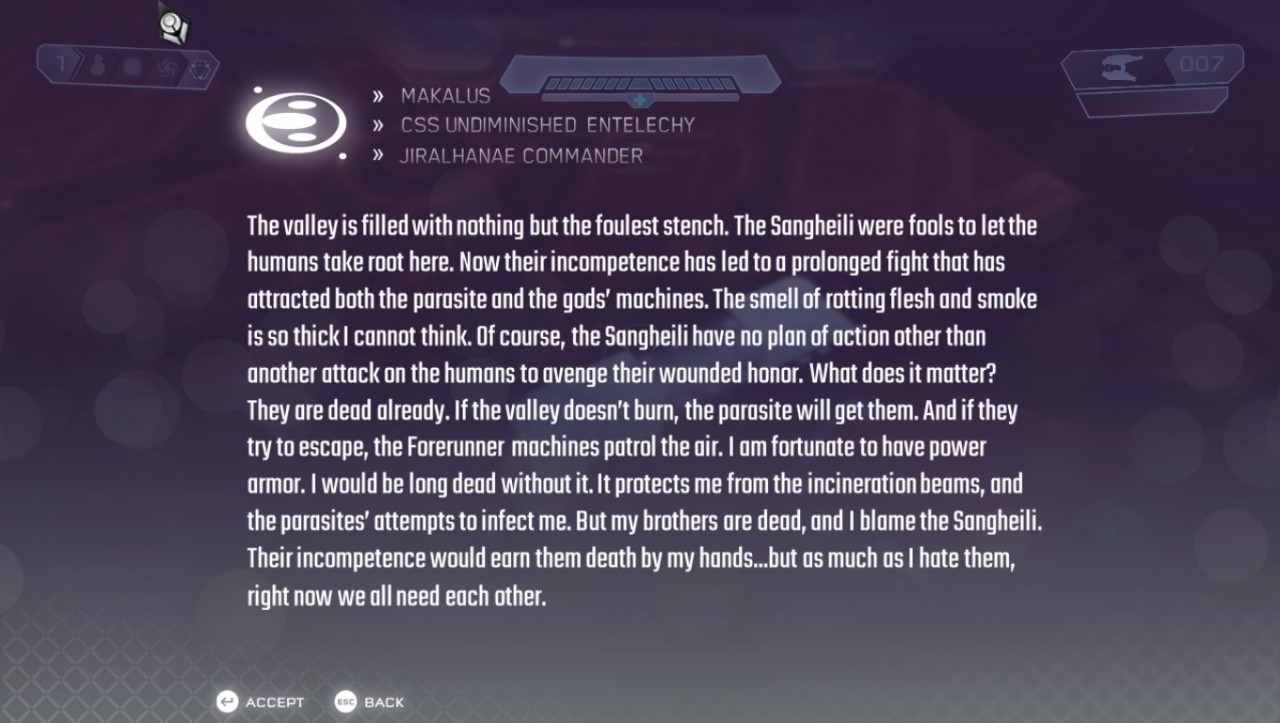 Elite carrier forms with live plasma grenades await in the next tunnel. It’s worth hanging back in the Evil Bunny Rabbit of Doom light bridge room as the combat forms can overwhelm the tank and a few have rocket launchers. Approaching the edge, Cortana says to destroy the holopanel to extend the bridge. It makes as much sense as it does in Star Wars or Marathon.

After a bunch of hunters past the light bridge, there’s a second light bridge made of a force field door where the jump ramp is. The terminal below is still there, but the message is different. 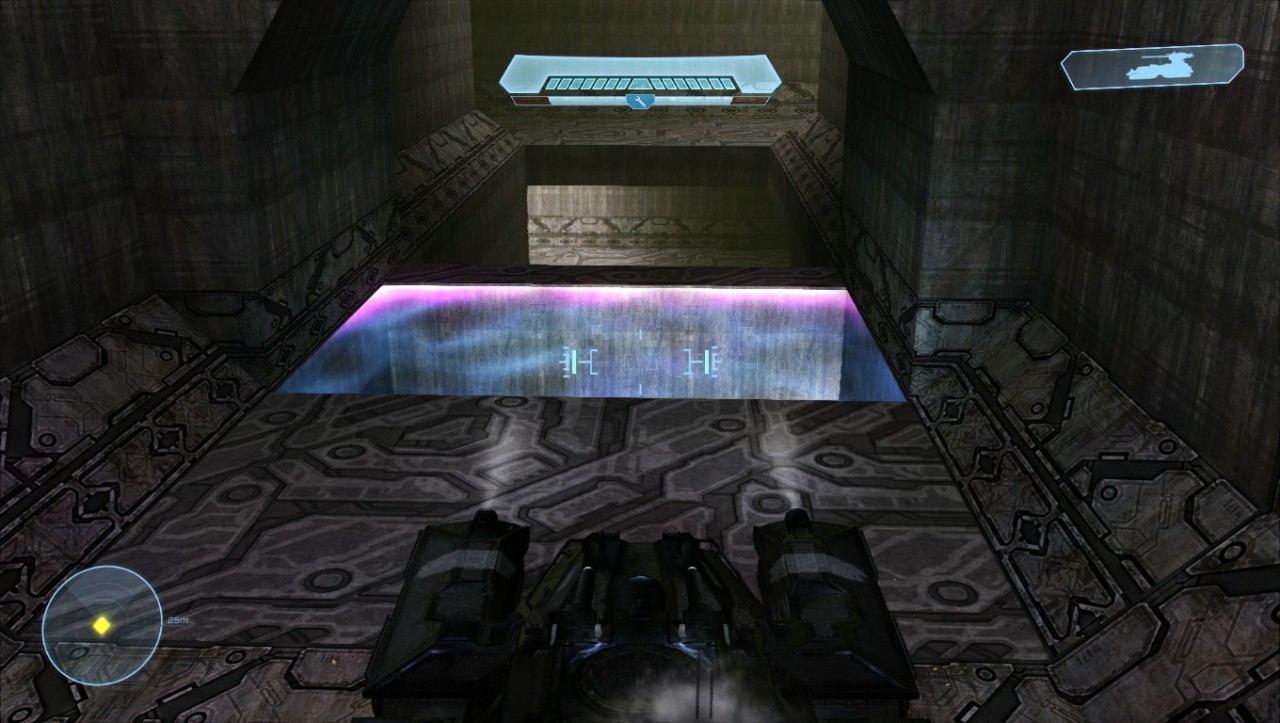 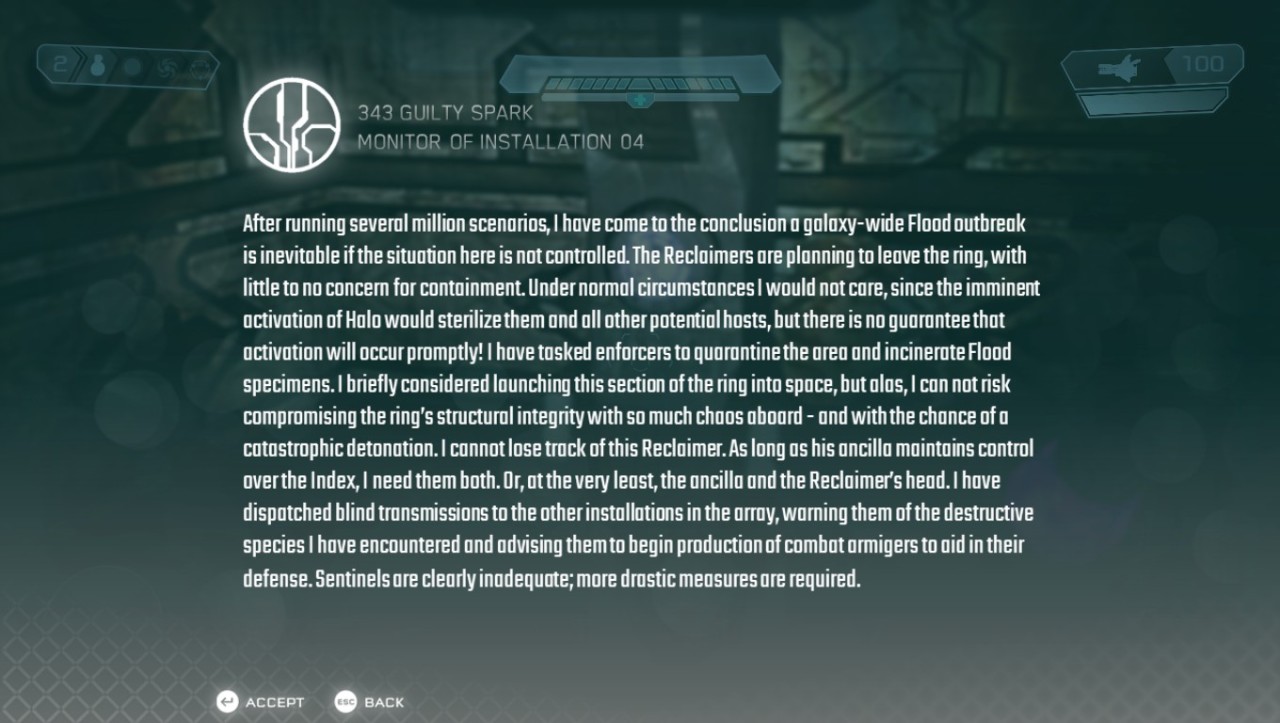 I guess he does know about the Autumn’s engines after all. I exit the tunnel into the dry wash I entered what feels like years now and find the last valley a warzone. Turns out the smoke I saw earlier wasn’t spores and it was indeed smoke from a very big forest fire. 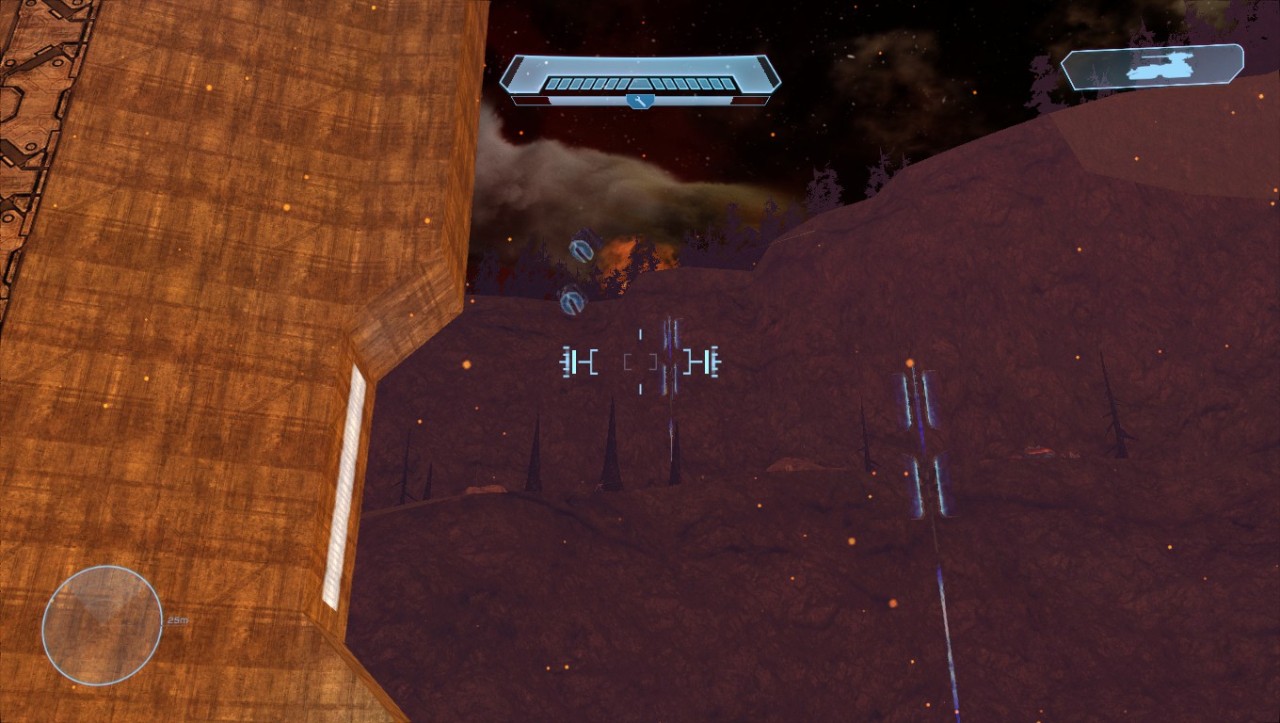 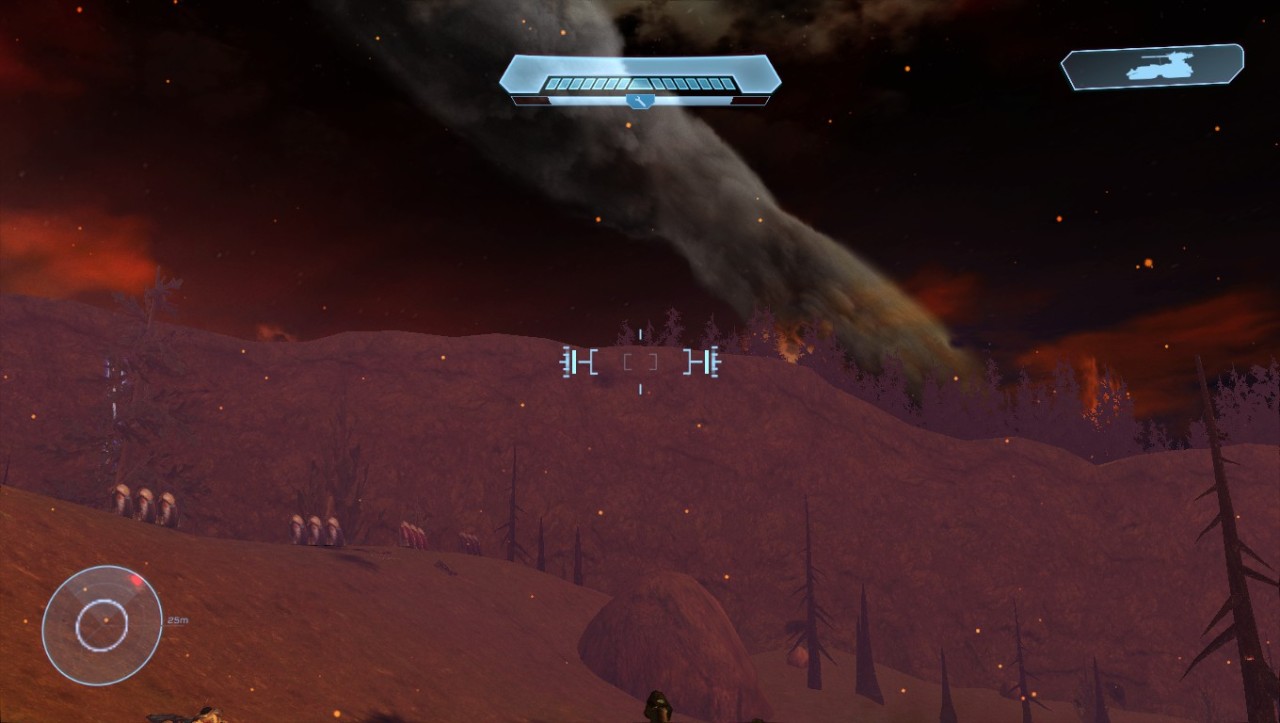 The broken nosed pink guy stalking us still unseen seems gleeful at the destruction and seems to want to fire the ring at Earth via a beam instead of a pulse as a tool of conquest, even going so far as to destroy it himself using the ship if all else fails and keep us on it. The butte and forest up top are his first targets.

Among the pretty much all the Covenant are out to play and among the banshees, enforcers, hunters and wraiths, jackal snipers have handy little platforms on a couple of the beacon complex’s towers made of energy shields. A stolen wraith takes care of them. 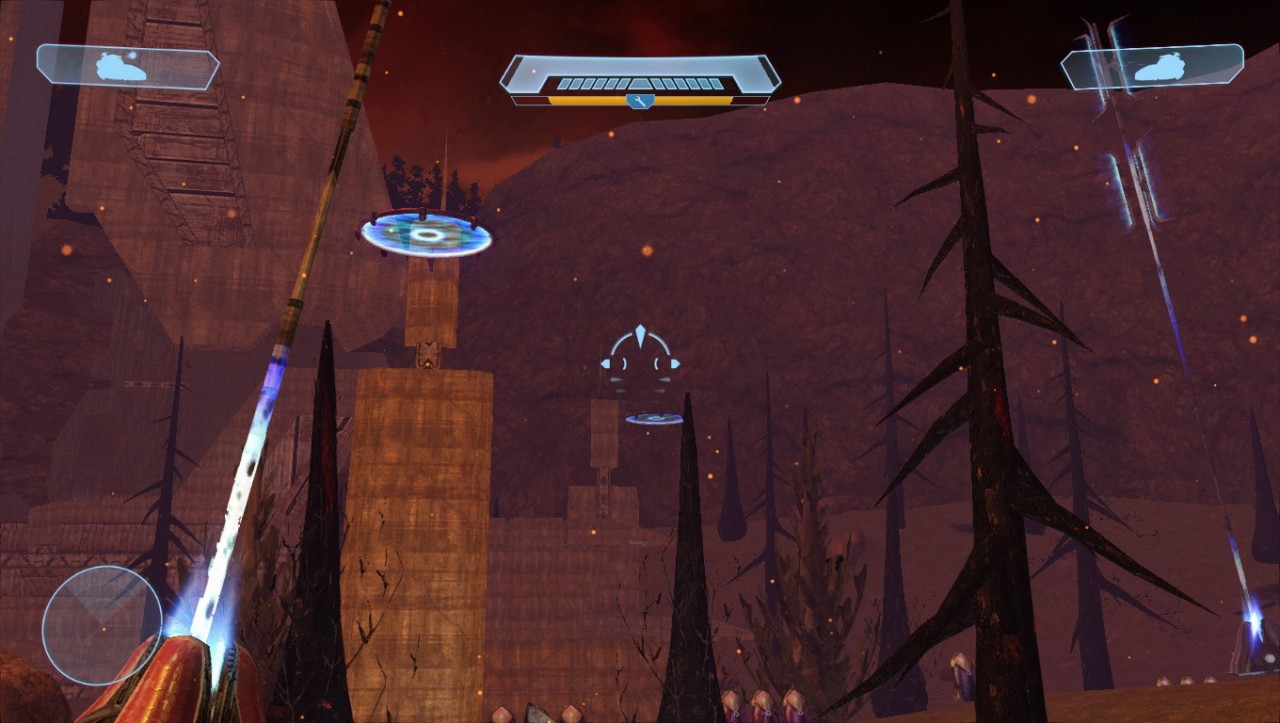 The last Covenant terminal is on top of the beacon complex. Watch out for snipers on the ridge. 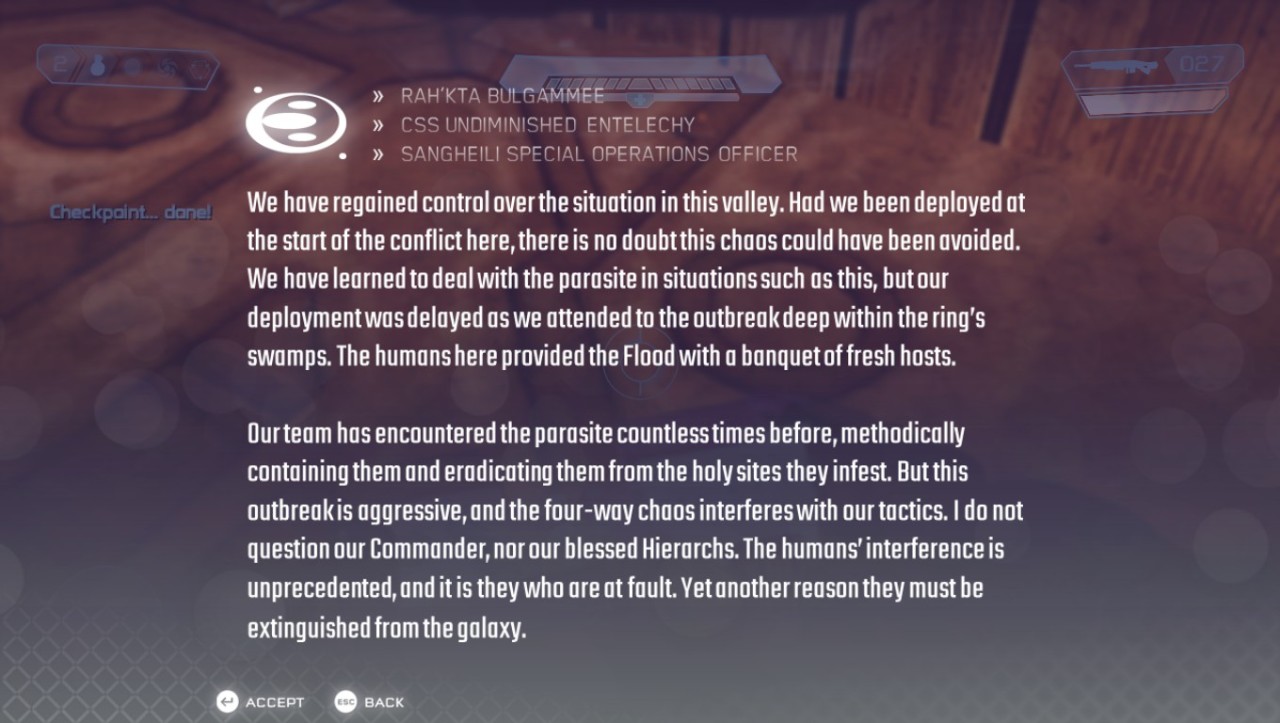 A blockade of jackals aided by 2 elites and a swarm of Flood wait for me in the pass back to the cliff my lifepod crashed on. Dealing with brutes, jackals and skirmishers on the hill, I flee boldly down toward the remains of the pod, jumping into the river to reach it. 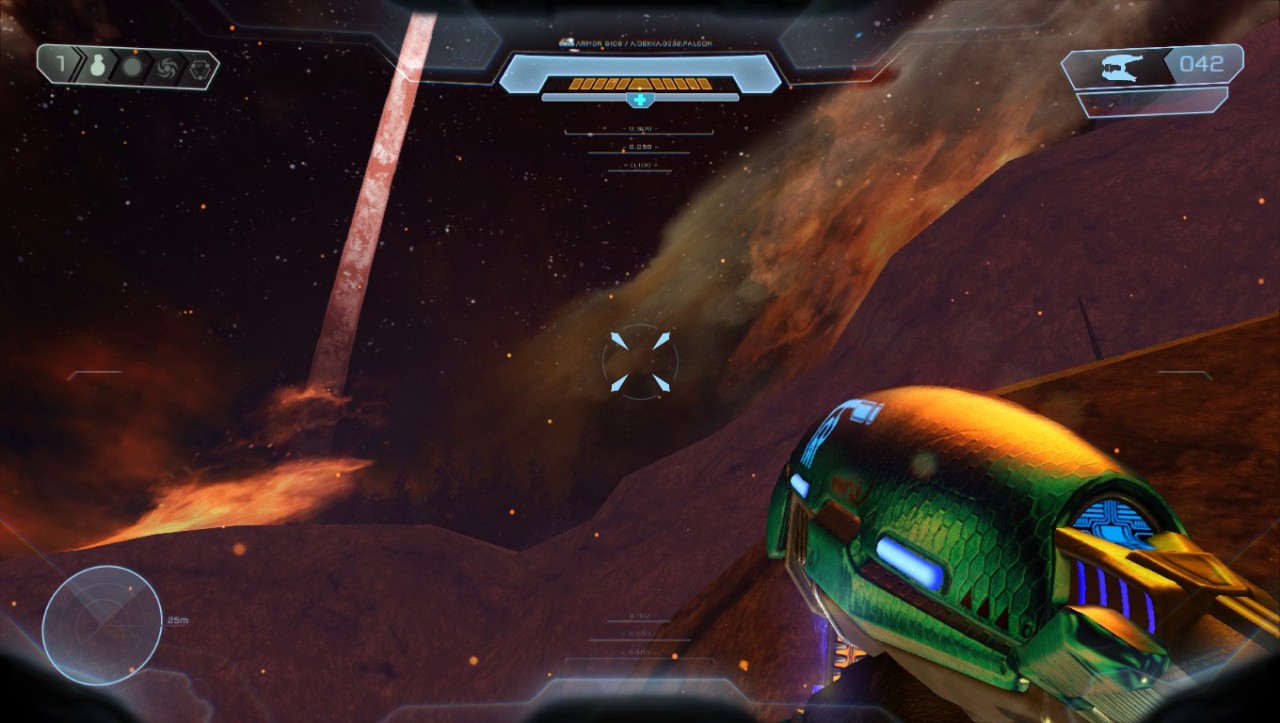 The entire mountain’s on fire!

“That’s the way the cookie…ha, mountain crumbles!” the unseen sneak sneers before laughing evilly. He forgets I still have the star…urm, Index so his gloating is premature. 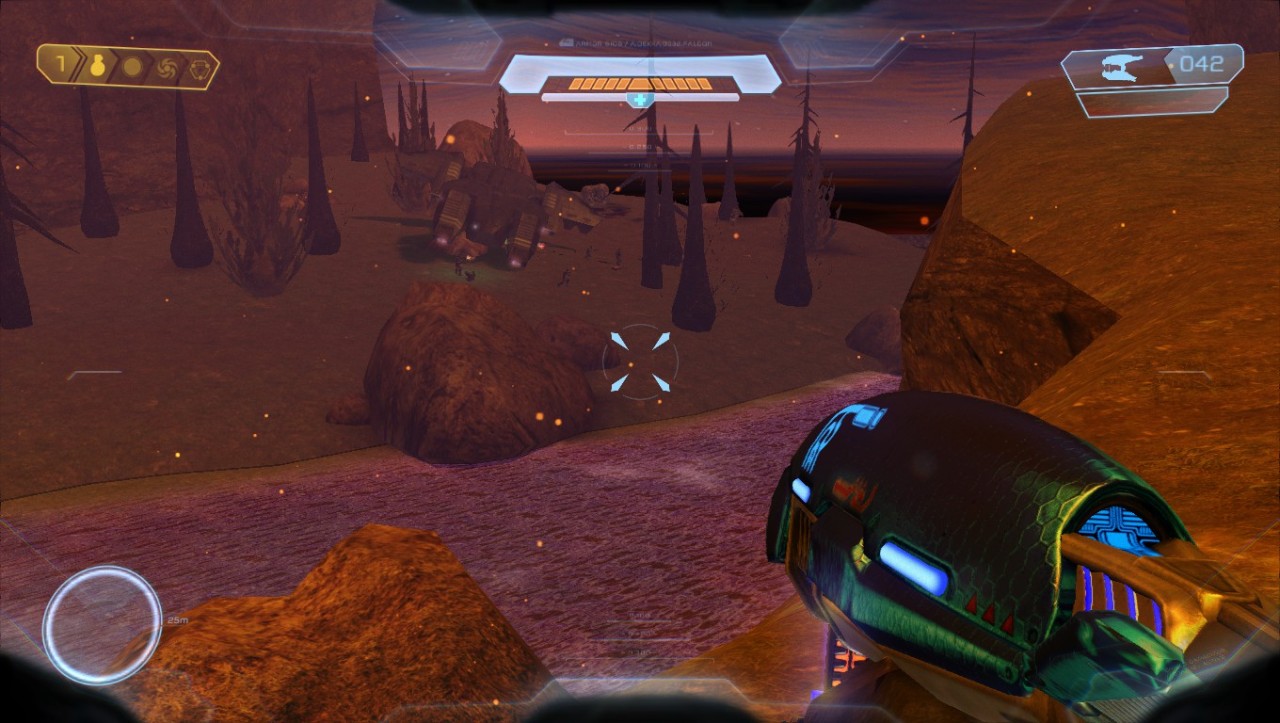 Surviving marines! The console to the pelican is active and Cortana says to let her at it. But first I read the final terminal of this level on the left of the dropship. 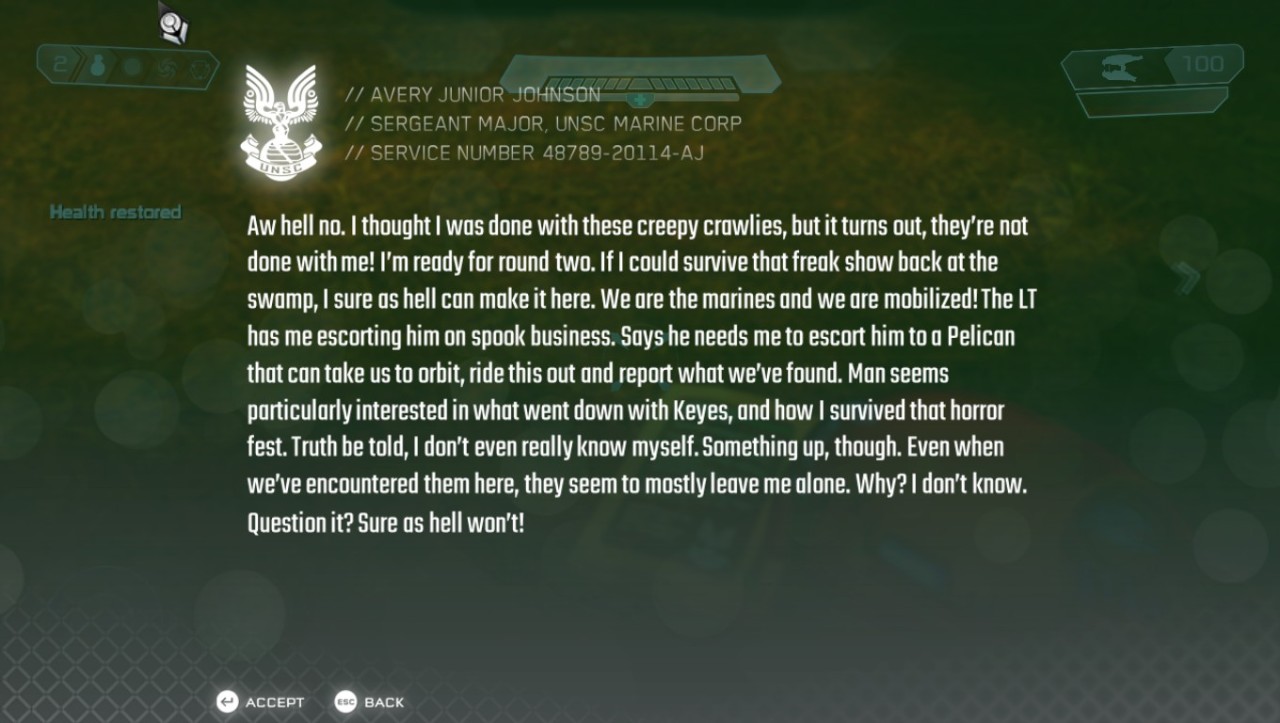 I guess this spoils the surprise John gets in First Strike when he finds Johnson alive. Or maybe it doesn’t given the ending cutscene.

No sooner have I started up the ship, the Flood attack and Leondias starts up again for a thrilling last stand. I have a shotgun and a brute plasma rifle at the ready. No flugs, combat forms or ranged forms survive to infect the marines and just as things get hairy, Cortana tells us to board the dropship. We make it out and those marines do survive. 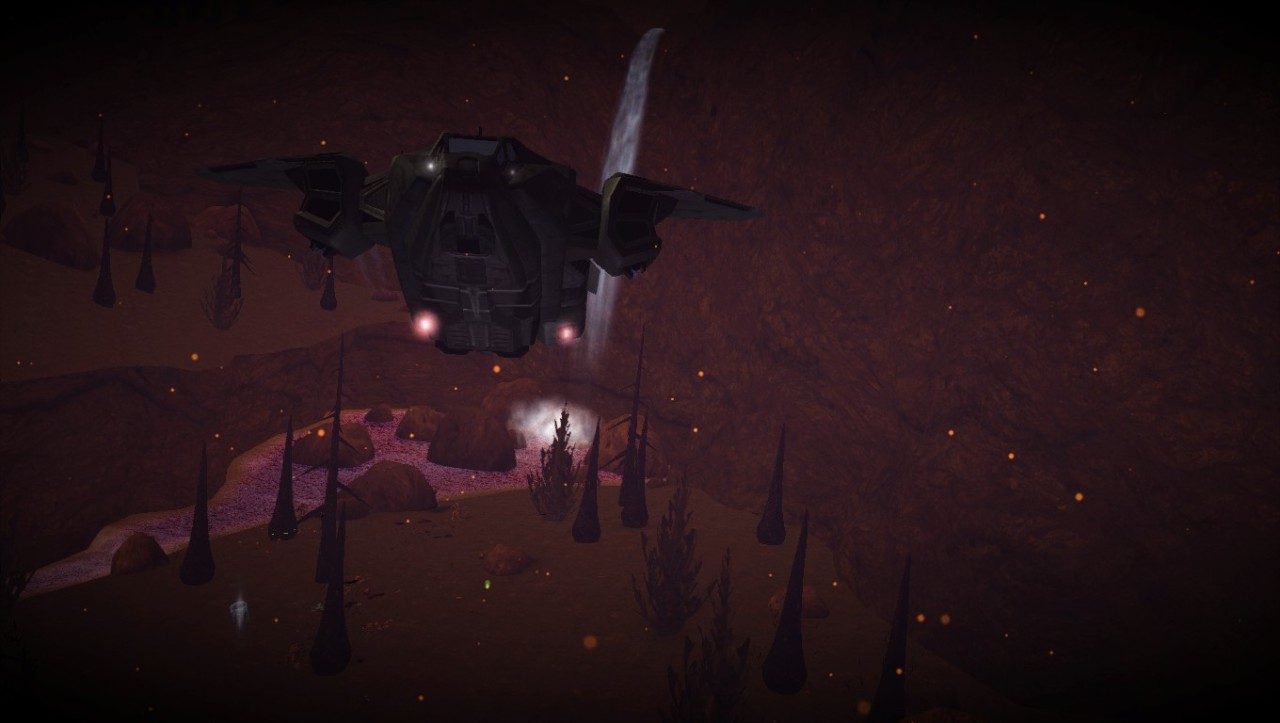 In a new call forward to Halo 2, Supreme Commander of the Fleet of Particular Justice Thel Vadumee later known as the Arbiter goes to the Cartographer island and finds out the brutes have betrayed them! In fear of the Flood, they turn on the elites and need to be put down. The parasite has claimed the entire island and is studying the map room. Take control of the Arbiter a game before you are supposed to for some aptly timed disinfection. Next time on Halo SPV3: Special Stage 2: The Commander. Now the Adventure evolves.