Act 3: The Tunnels Below – The Dead Live in The Catacombs

Cortana gets back to me on the Pillar of Autumn: she put down 12000 kilometres up spin and the fusion reactors are not only still working, but still powered up! There’s one small problem: “The systems on the Pillar of Autumn have fail-safes even I can’t override, without authorisation from the Captain.” Cortana tells me. “We’ll need to find him, or his neural implants to start the fusion core detonation.” Last we saw him, he was being infected by the Flood and the passages from the book we’ve seen hint that unlike other Flood forms, he’s been subjected to a fate worse than death. You may be able to guess what that is…

The CNI transponder/neural implants are basically a Halo version of the Pfhor’s control glands, but cybernetic instead of pheromone based and for humans instead. They seem to be a form of HUD outside armour, going by the definition of neural interfaces our two cyborg protagonists in the System Shock games have.

The tunnel has shades lining the bottom and there’s rocket Flood around the corner once you reach the manmade part. I guess the tunnel in Halo (the level) was meant to be like this, but they made it artificial at both ends so the one here wouldn’t come across as repeating tricks. I fly as close to the ceiling as I can and dash quickly around the corners, trying to avoid the rockets. It’s harder than it sounds as the covenant will aim up at you as you fly over them and rockets are faster than you close up so the tunnel feels narrower at the bottom.

This section kills me a lot as I find out that the brute needlers that the infantry are carrying are very effective against sparrowhawks so I hang back and rocket them all to death. Even then, the little fucks with RPGs around the corner at the bottom still get me a few times before I thrash them. If you can make it past without killing them, just keep going: you’ll hit a loading zone and the enemies behind you will despawn.

The door into the underground chasm with the broken bridge explodes and breaks apart when I try to open it, forcing me to continue on foot. 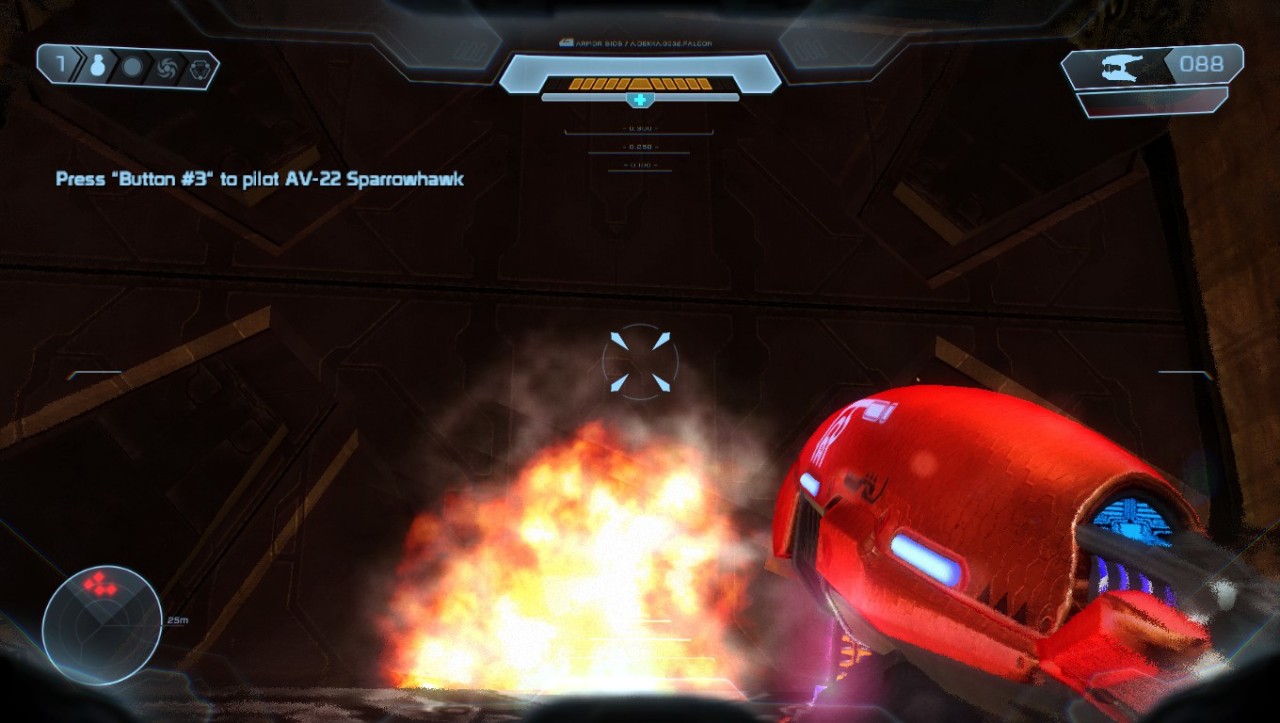 It’s gasbag city in here with a couple of elite carrier forms. There’s just enough space in the gap between the door pieces for one of the vanilla carrier forms to waddle through. 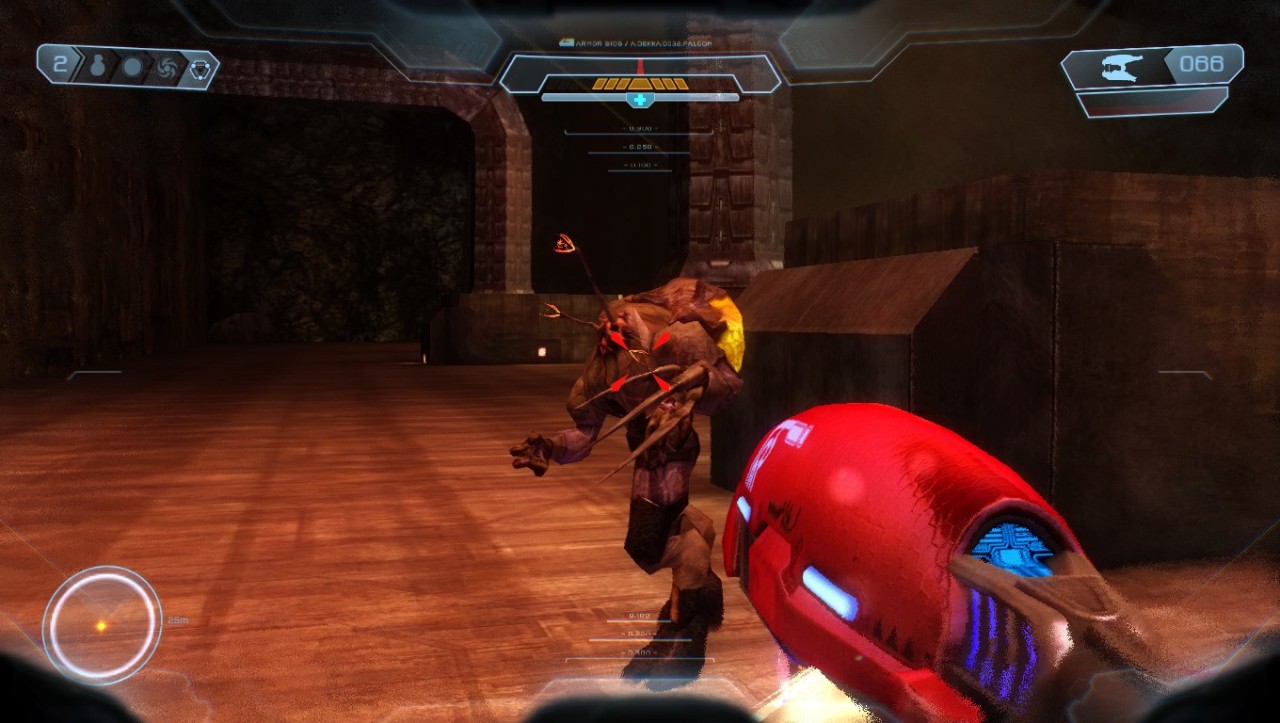 That is what an elite carrier form looks like. You get human versions too. As I cross the bridge, 2 whole swarms of flugs come out of the alcoves when there was no sign of them hiding there just seconds before in vanilla. Now it’s a bunch of jackal carrier forms. At least one rocket launcher combat form waits on the other side of the bridge, by the next forerunner terminal and an ammo cache. The bridge itself now has a lot of space crates and computer things on them whereas it doesn’t in the original game, giving both you and the Flood more cover. 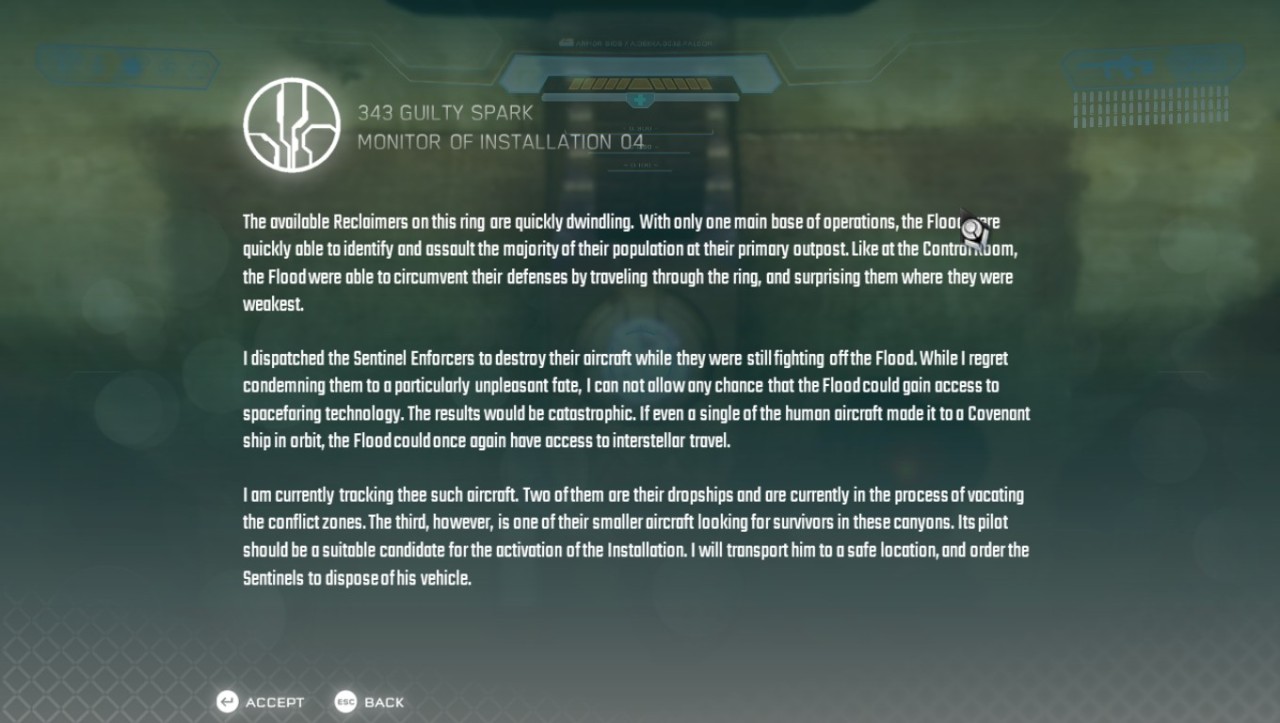 Remember the lower areas we can’t get to in the anti-grav elevator shaft in Alpha Base’s motte? There’s a grated floor down there that connects to maintenance areas and vent shafts under the ring’s surface, connected to Alpha Base by a single staircase that ascends through the grate. The Flood attack from there but the marines and ODSTs were expecting it according to the book: when Jenkins was infected, the flug that got him had been weakened in stasis and wasn’t able to control him properly, leaving him not only alive, but fully aware of what was happening to him. He couldn’t talk, and could only fight to gain control of himself when the Flood was either preoccupied or allowed it.

After being captured by marines after they saw the Flood for the first time during a failed ambush on the Covenant below the buttea fair distance away, Jenkins was able to mime to the ODSTs’ leader and second in command what the Flood was planning. They do make it out and attempt to use the Truth and Reconciliation to escape the ring. More on that later.

Spark however sounds like he’s found his next victim. I hope he has the sense to attack the Monitor and run. 2 more doors and an empty tunnel bring me back outside into the cold, icy, embracing snow. 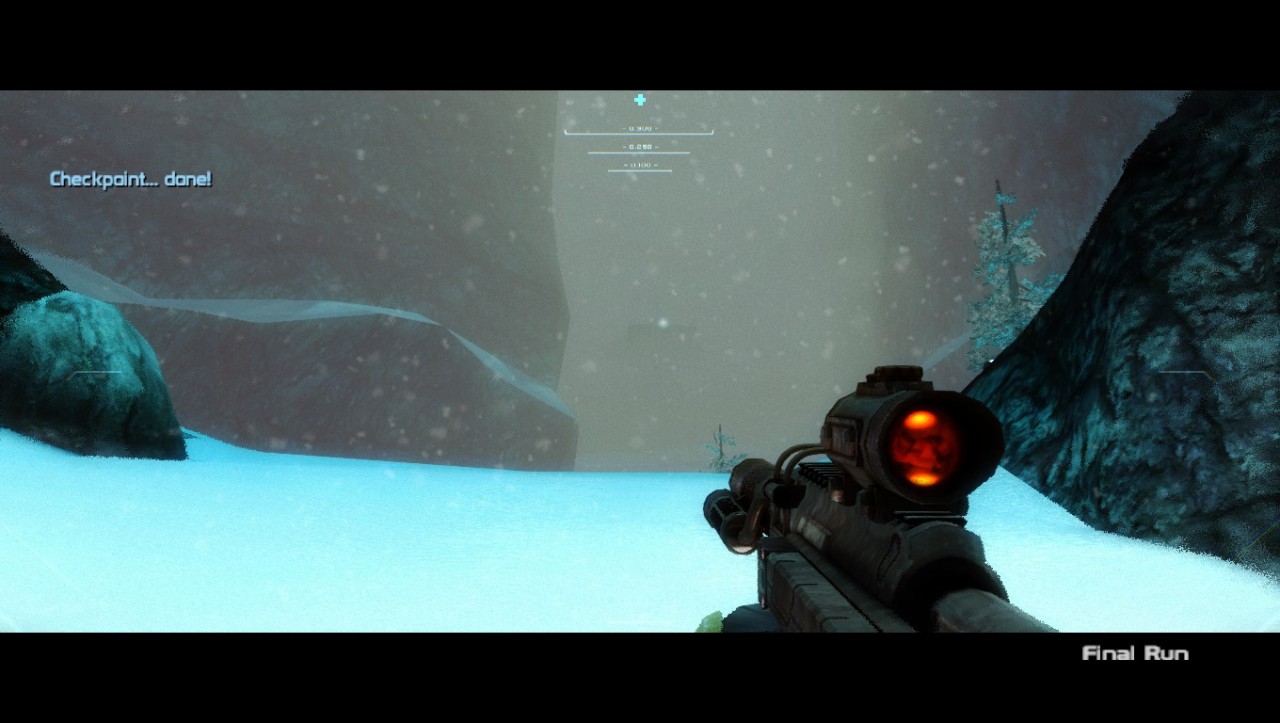 For the second time in the game, Under Cover of Night from the Truth and Reconciliation plays, this time in full. I spend my final rockets on some Flood to the right and a banshee. More of them including rocket combat forms attack the Covenant on the snowy knoll with the ghosts and shades. Let them infect or kill the covies and then come to you. The rocket guys are killed in the fight.

When I drive my recently stolen ghost into the area where the grizzly was, rocket Flood are facing off against more brutes and other covenant. I drive toward the far end and deal with them first before turning my attention to the others. Circle strafing the rocket Flood in a ghost here works very well. The next terminal is by the now caved in tunnel, by a big cache of ammo and weapons and health. 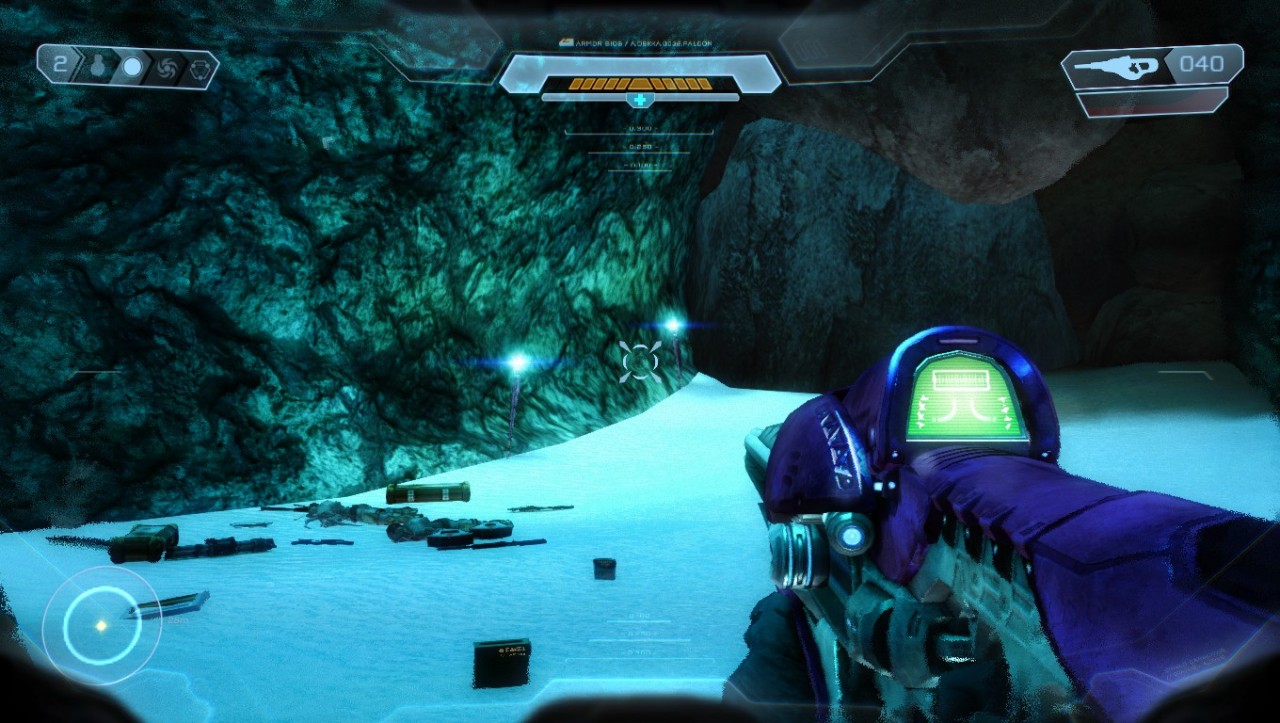 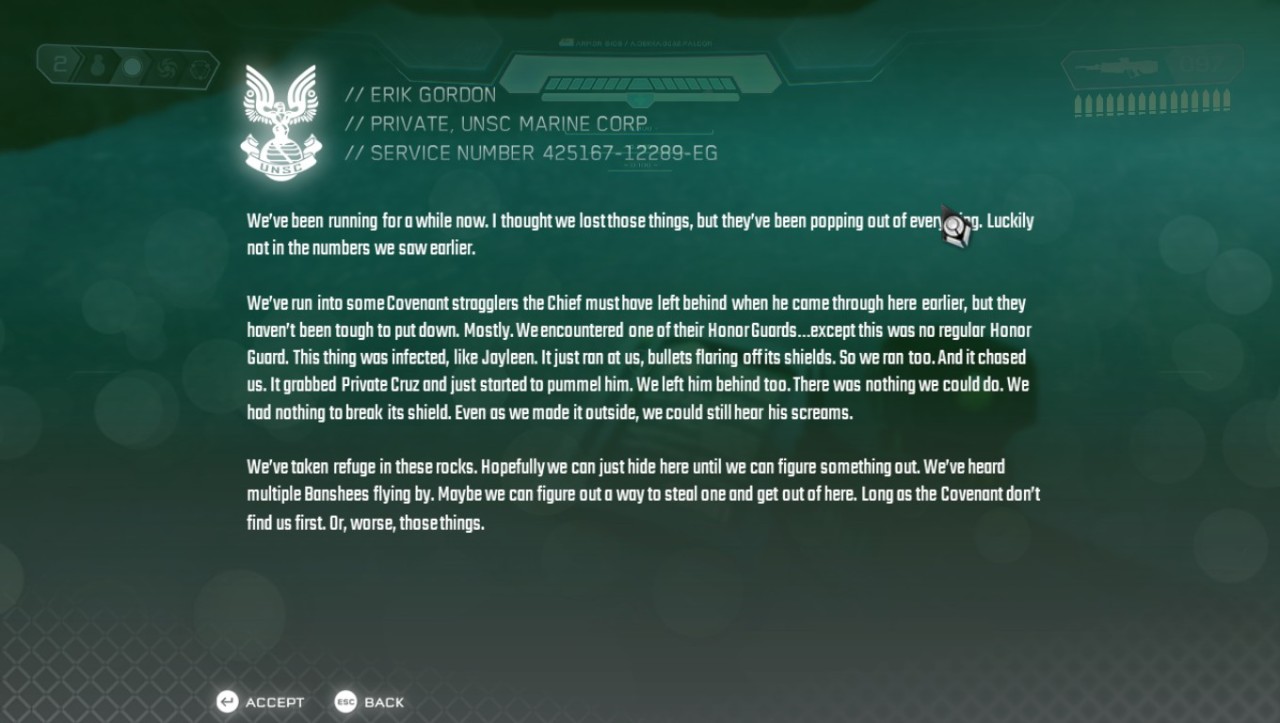 Something tells me this was their last stand, assuming I don’t find another terminal of Erik’s in the 2 new levels after Keyes. I drive past the crashed pelican and carefully nudge the ghost over the ridge using the airbrake. More covenant and Flood are fighting in this final part of the first canyon (or third as it is now) below the original footbridge, with wraiths and hunters at the far end of the Fjord. There’s now 2 large boulders where there was once an ice wall and the banshees I need to get to the top of the fjord in front of them. I blast the Flood hiding in the shadows behind the shade hill where there used to be a spectre. Normally I drive quickly behind the boulders, slip out through the middle and take off in a banshee before they can shoot me down, but not this time: The final terminal is by a covenant deployable shield but I need to clear the area first. Boarding a wraith will do. 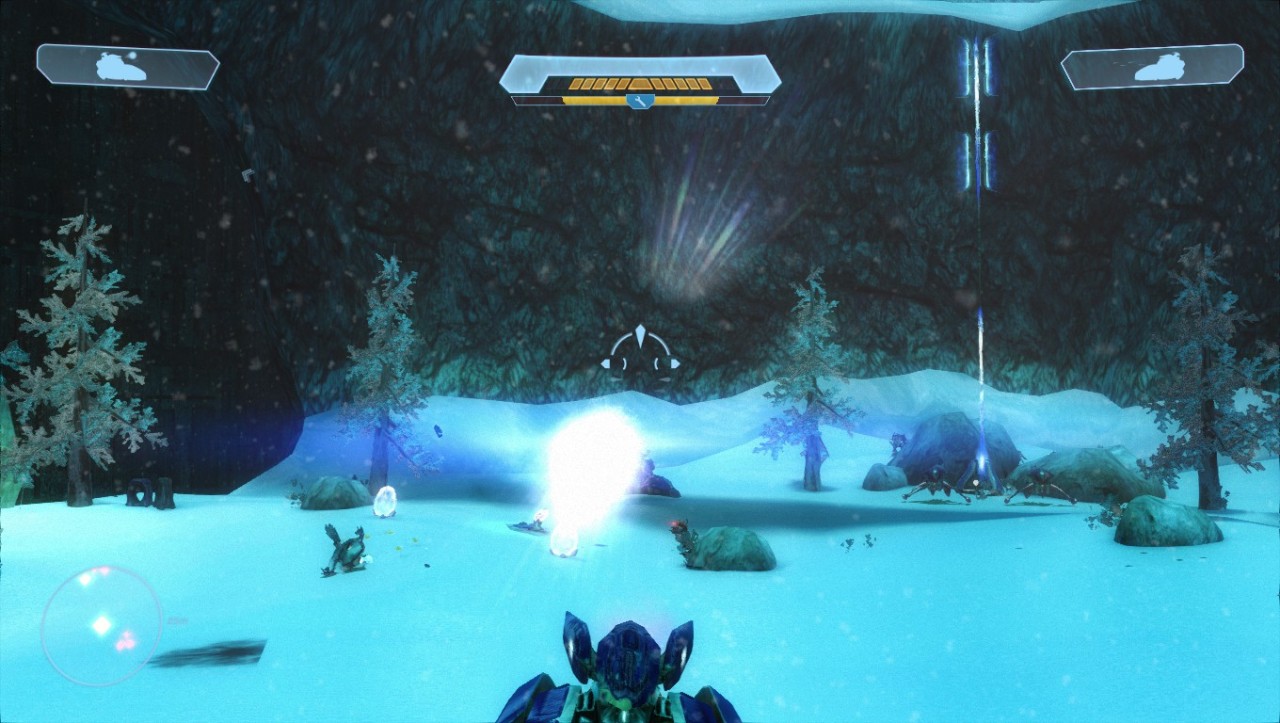 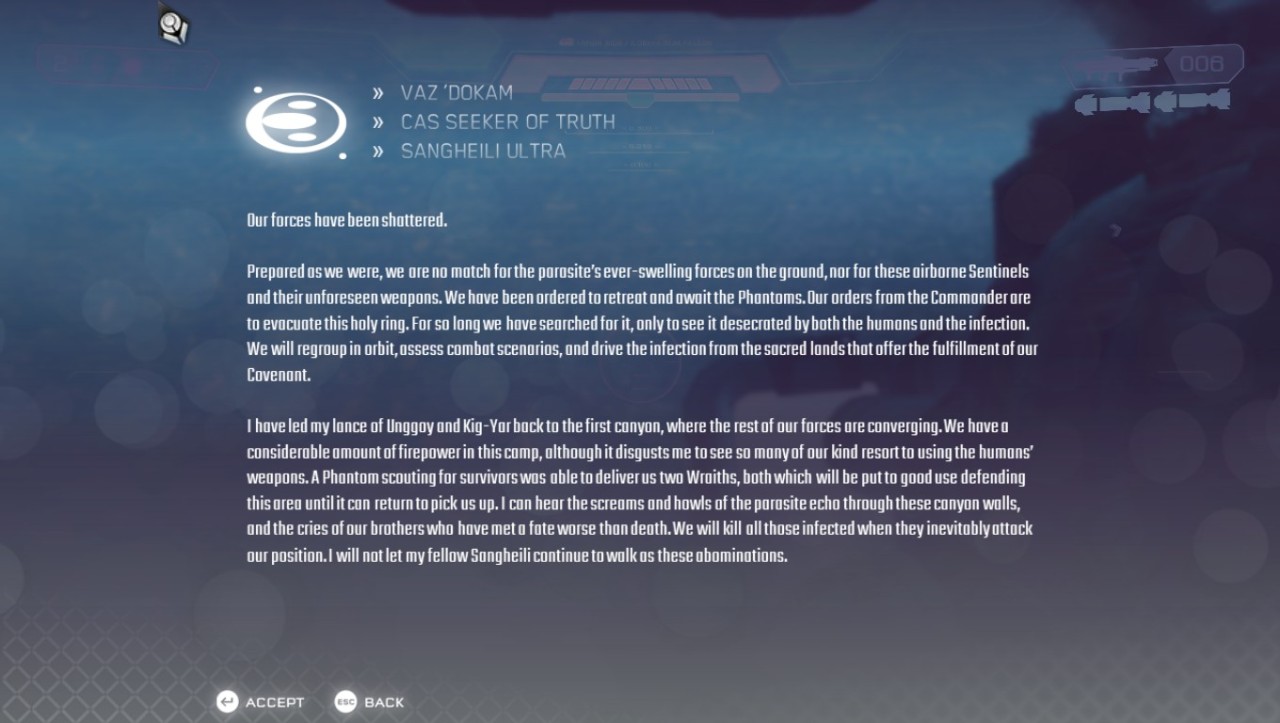 Here’s the problem with evacuating: the Flood have attacked the Truth and Reconciliation and disabled it, bringing it down on another part of the desert plateau it was originally parked on, though I think it will still be on the Mountain as it was before in SPV3, albeit lower down the slopes. It’s not even hovering now, but resting on top of the small maze of canyons there like a fat man lying on a Persian carpet. The Covenant know the Flood are trying to use the ship to leave the ring and they will not let that happen. It just so happens that this ship is where we will be heading next. I grab the left banshee for luck and fly over the top of the footbridge.

Both doors including the one back to the vent shaft are now forever sealed so I keep ascending towards the very top of the first canyon. 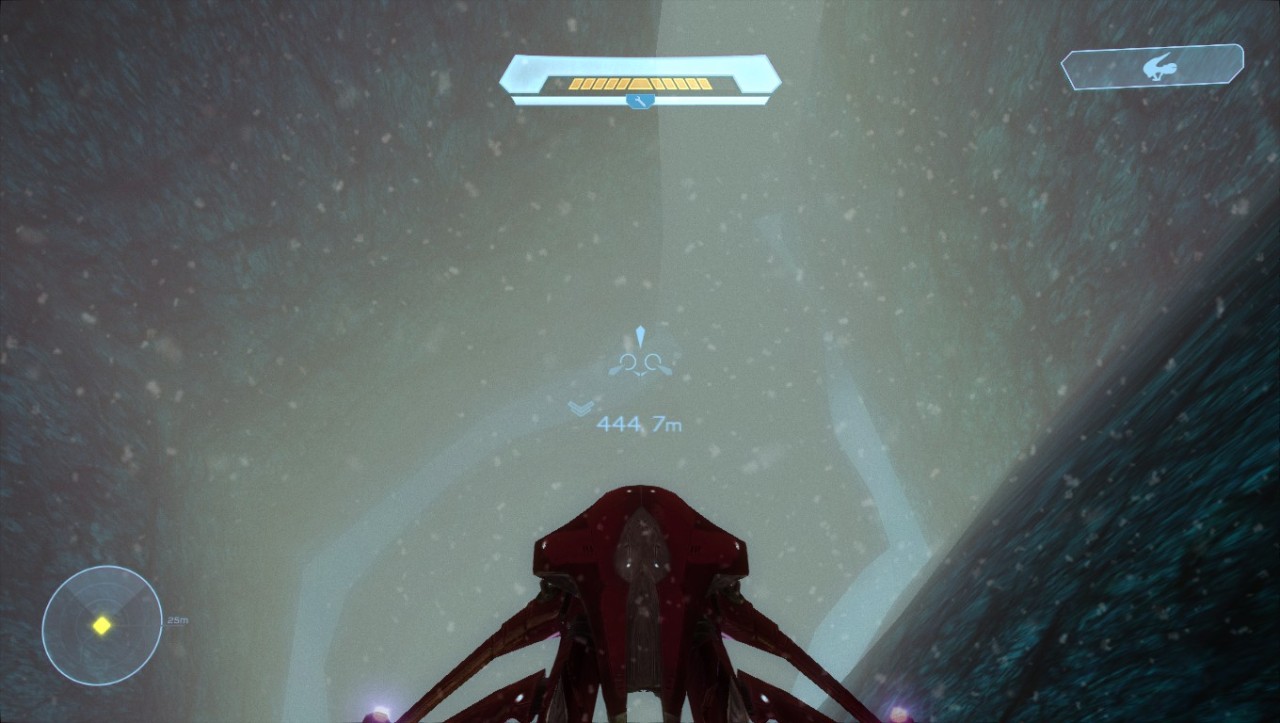 2 Enforcers are waiting by the landing pad outside the final pulse generator. They make an easy dogfight to win. Normal sentinels and sentinel majors wait inside the building around the generator. Triggering the EMP blast and destroying the generator is enough to destroy all the sentinels as well. “Final target neutrailsed.” Cortana says as I step back just afterward. “Let’s get out of here.”

“Let’s find a ride and get to the Captain.” I agree with her and turn to leave. “No, that’ll take too long.” “Do you have a better idea?”

“There’s a teleportation grid that runs throughout Halo. That’s how the Monitor moves about so quickly.” She explains. “I learned how to tap into the grid when I was in the Control Centre. Unfortunately, each jump requires a rather consequential expenditure of energy.”

So at least she’s honest about why she couldn’t just teleport us to the pulse generators. She doesn’t have a way into Halo’s systems to reroute the energy we need. “Something tells me I’m not gonna like this.” I tell her. “But I’m pretty sure I can pull it from your suit without permanently damaging your shields. Needless to say, I think we should only try this once.”

“Do it.” Cortana then triggers the same teleportation that 343 Guilty Spark used with us earlier. Next stop: the damaged Truth and Reconciliation.

The Truth and Reconciliation is now damaged itself and the Flood are everywhere! Coolant leaks from every available hole or broken pipe like a bleeding fish in a reef. Captain Keyes is on the bridge of the ship and we aim to storm the place and rescue him for the second time, but so is the embryo of the most horrible Flood form to date. You won’t believe the shocking creation of the Flood! Next time on Halo SPV3; Stage 9: Keyes. Now the adventure evolves.