I just read the Haunter in the Dark.

In the story, Robert Blake finds a crystalline Trapezohedron in the windowless steeple of an abandoned church. The trapezohedron was brought to earth from Yuggoth (pluto) and looking into it shows him images of realms beyond the cosmos and into the darkest reaches of Azathoth's lair.

He leaves the trapezohedron in the steeple and at night a Haunter in the Dark begins lurking in the church. It avoids the light, and won't leave the church because of the street lamps. The police investigate the church, but find nothing. At night Blake randomly wakes up in the church from sleepwalking and hears the Haunter in the Dark creeping in the steeple. The thing calls for him, but Blake gets awakened from his hypnosis by any hint of light coming into the church.

One night there's a thunderstorm, killing the power in the city. A black cloud in the sky flies to the east, and Blake's corpse is found in his study. He died of an electrical shock, even though the power was out and the window was closed and unbroken. In his last journal entries he wrote that the thing is coming for him, he is the thing and the thing is him. Dark is light and light is dark. The last thing he wrote is that it's a demon wind - a Titan thing with black wings, and curiously, a three-lobed burning eye. The hintings at what this is sounds a lot like the alien possessors from Strife, if any of you have played it. I say it's pretty spot-on.

It's kinda hard to make out here, but this is the only screenshot I could find: 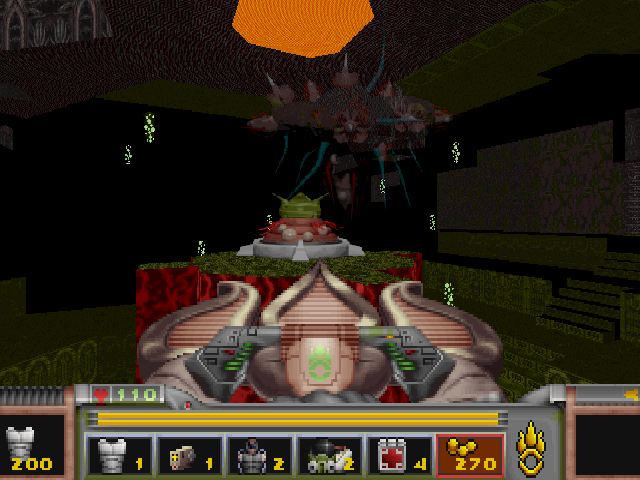 So what can be concluded from this? Well, Robert Blake left Earth in his new body into the outer worlds and hitched a ride on a passing meteor to possess the denizens of Strife and feed off the planet to sustain his form, then fled to another world to start a new order feed on for some hundred or so years until a psionic prince returned from exile to banish him. In the last weakening years of his alien life, he settled in Tau Ceti to transfer his consciousness into a human mind in a converted moon, renaming his host Robert Blake.

As for the three-lobed-eye bit... it kinda reminds me of those buttons on the pfhor ship pf M1.